Deep Down: Everything We Know 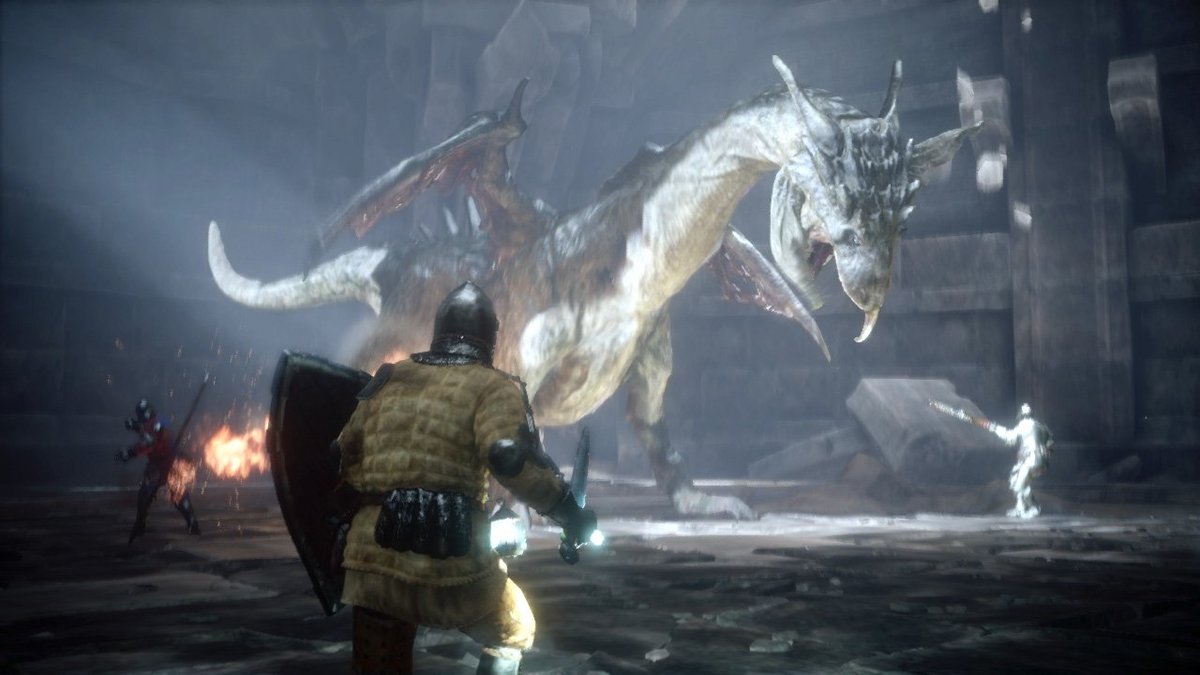 An ‘Assassin’s Creed’ – ‘Dark Souls’ hybrid with giant flame breathing dragons, and cooperative dungeon crawling with your friends. That is basically what we got from Capcom’s ‘Deep Down’ reveal back during the PlayStation 4 launch event in 2013. The game’s premise looked and sounded pretty fantastic, so why haven’t we seen a full release yet? Is ‘Deep Down’ even in production any more? Read on to find out everything we know about Capcom’s long lost, but not yet forgotten monster-slaying adventure.

Deep Down Gameplay: What To Expect?

Of course, having only ever managed to reach the early stages of development, not much is known about the setting or the storyline of ‘Deep Down’. In fact, even the title itself is subject to change, with Capcom repeatedly asserting that ‘Deep Down’ is just a working title. What we do know is that the game features two distinct time periods that the player frequently switches between – the year 2094 in a futuristic vision of New York City, and the year 1494 in the medieval Czech Republic.

You are a member of the Ravens, an ancient sect of divinators possessing the ability to unmask historical memories by physically touching ancient artifacts. When ancient artifacts from a mysterious civilization are discovered in the modern-day Czech Republic, the Ravens are tasked with exploring the ruins and discovering its secrets.

The webpage for the game describes it as follows:
“From legendary game developer, Capcom comes deep down (working title), a fantasy role-playing game that will test the nerve of even the hardiest adventurers. deep down has been developed using Capcom’s Panta Rhei game engine to fully harness the power of PlayStation 4, creating a game world of unimaginable depth and detail.”

In many ways, ‘Deep Down’ is strikingly reminiscent of the ‘Assassin’s Creed’ Games. The two exceedingly different time periods with wildly contrasting technology as well as the out of body experience mechanic where your consciousness travels into the past is very similar to the Abstergo storyline in ‘Assassin’s Creed’. Even the sterile, whitewashed aesthetic of the future shown in the trailer is evocative of Ubisoft’s long-running ninja simulator franchise.

However, while ‘Assassin’s Creed’ is primarily a narrative-driven experience, ‘Deep Down’ focuses on multiplayer game style. More specifically, the game features a cooperative multiplayer. Being a fantasy dungeon crawling game set in a fantastical world, ‘Deep Down’ has you combat all manner of dreadful monsters down in the deepest, darkest dungeons.

Based on the trailer, the dungeon combat seems to be heavily influenced by FromSoftware’s ‘Dark Souls’ series, with players battling terrifyingly oversized monsters armed with plate armor and medieval combat implements such as swords and bows. However, unlike ‘Dark Souls’, ‘Deep Down’ looks to be placing a heavy emphasis on the cooperative play to take down the monsters, with teamwork and communication being key to success.

This hints towards a class-based system in the game, where teams of dungeon marauders consisting of unique specialists that complement each other’s skillsets in order to achieve victory. The game world is procedurally generated, so most encounters are unscripted and require real-time strategizing and improvisation.

Capcom has previously revealed that ‘Deep Down’ is adopting a free to play monetization model, which almost certainly confirms that the game will feature extensive character customization via skins for your weapons and armor. Hopefully, these skins will be unlockable via regular gameplay instead of being exclusive to micro-transactions.

Of course, there is always a distinct possibility that the final game will be something completely different from what has been previously hinted, with Capcom producer Yoshinori Ono revealing in 2015 that the development of ‘Deep Down’ could head in an entirely new direction altogether.

Deep Down Developers: Who Are the People Behind It?

‘Deep Down’ was initially revealed during the electrifying PlayStation 4 launch event in February 2013 by Capcom’s Yoshinori Ono, who is best known for his pioneering work on the ‘Street Fighter’ series of fighting games. The game was announced along with Capcom’s latest Panta Rei game engine, which was supposed to be powering the game.

The game was being developed by first-party Capcom development studio and subsidiary, Capcom Online Games. However, since then the Panta Rei Engine has been abandoned in favor of the newer RE Engine, and the original team behind the game has also dispersed into other project teams. Therefore, it is unclear who, if anyone, is currently working on the development of ‘Deep Down’.

What we can say for certain is that Capcom will be publishing the game, having recently renewed its trademark for the title ‘Deep Down’.

Deep Down Release Date: When And Where Can I Play It?

It is hard to say when ‘Deep Down’ will be released or whether the title is even under development right now. However, there is reason to be optimistic, since Capcom producer Yoshinori Ono has repeatedly confirmed that the game has not been completely given up on.

One reason why the original project for the PlayStation 4 may have been abandoned could be the game’s high technical level, with cutting edge lighting techniques, animations, particle effects, and procedurally generated environments. It is possible that the PlayStation 4 simply lacked the processing horsepower to handle all that.

With the impending launch of the next-generation PlayStation 5 and Xbox Series X next year, the technology may have just matured to a point where Capcom reassesses the viability of ‘Deep Down’. As it stands though, I would not expect a release anytime before 2022.

Initially, ‘Deep Down’ was announced as a PlayStation 4 exclusive. Therefore, it is likely that any game to come out in the future will be a PlayStation platform exclusive as well.

You can watch the reveal trailer for ‘Deep Down’ right here.