‘Defending Jacob‘ is an Apple TV+ murder mystery television series that takes its time to develop its premise meditatively. The Chris Evans-starring series tells an atmospheric, slow-burn tale of a couple fighting to defend their son, who has been charged with murdering his classmate. nThe first episode of the show introduces the basic premise, while the second episode sees Jacob (Jaeden Martell) being arrested for the murder. Chris Evans plays the character of Jacob’s father, Andy, while Michelle Dockery plays his wife.

The third episode begins with Andy hiring a lawyer named Klein, to defend Jacob. She asks Andy and Laurie to show no emotions in front of the press since everything will be used against them. Students at Jacob’s school are urged to not spread rumors and bring up any information that they might have.

Neal asks the court to set Jacob’s bail at $500,000. However, the judge decides to revert to the original bail amount of $10,000 as she does not think that Jacob is a flight risk. Jacob is released. On the other hand, Derek calls Sarah to tell her that Neal keeps calling him.

Andy tells Laurie something about his father. Laurie brings it up in front of Klein. It turns out that Andy’s father is in prison for murdering a college girl. Klein assures the family that it will be inadmissible in court, but will be used by Neal. Apart from that, Klein discusses how there is a theory that Rifkin bullied Jacob, and that is why Jacob killed him.

Andy goes to Duffy’s house and requests her to send Patz’s file to him. However, Duffy denies his request. A tutor is hired for Jacob. Laurie rejoins work but gets sent back as her firm’s board is worried about a negative impression. Duffy mails Patz’s file to Andy. Laurie and Andy find out that somebody has spray-painted the words “murderer rot in hell” on their backyard wall. Andy tries to clean it off. Laurie goes for a jog and remembers something from the past: how a young Jacob had almost hit another kid in the head with a bowling ball. 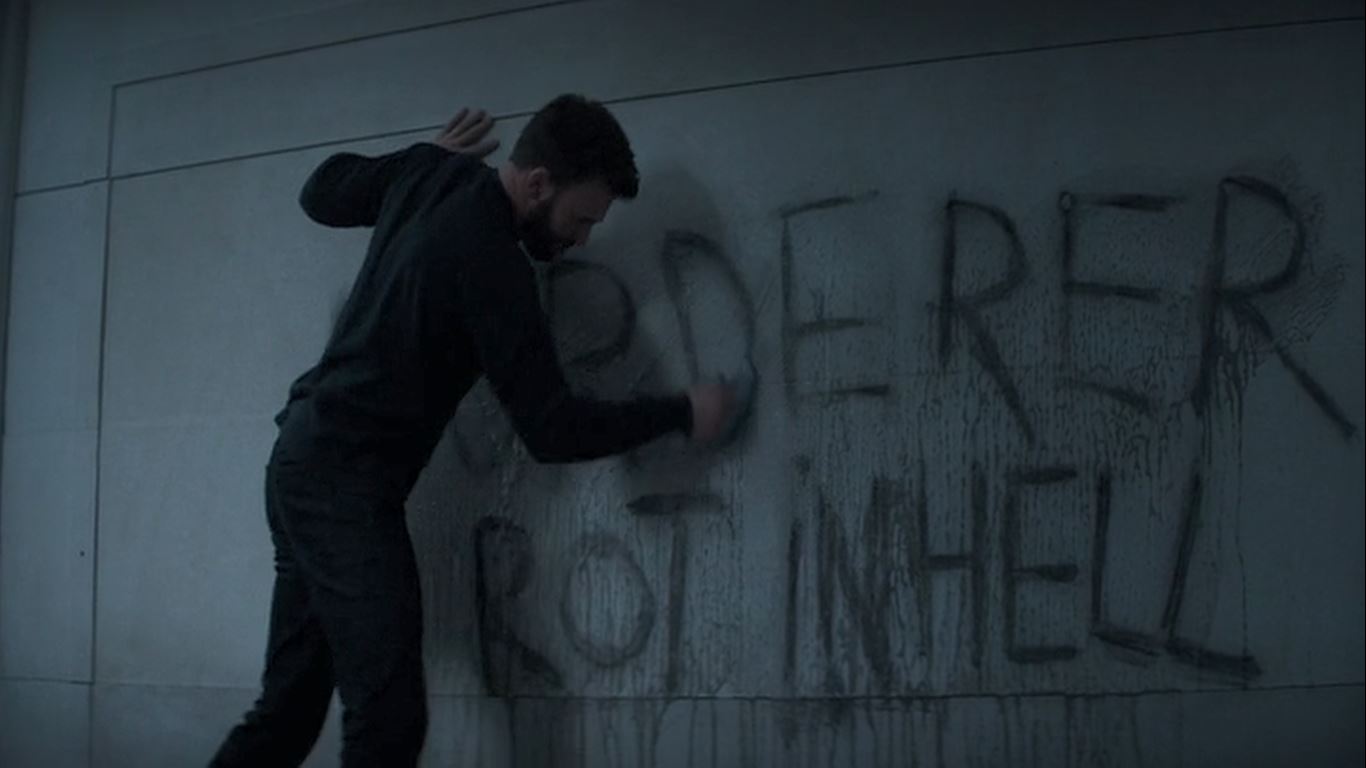 Andy and Laurie visit a specialist of genetic inheritance in behavior, on Klein’s recommendation. The specialist asks them about Jacob’s childhood. However, Laurie and Andy have conflicting opinions about that. Andy thinks that Jacob was like any other boy. However, Laurie thinks that raising Jacob was difficult and mentions how he had a couple of episodes of violence towards other kids: biting a child and pushing another off a play structure.

The couple returns home. Laurie’s friend is there with some food that she prepared for the family. After talking to her friend, Laurie comes inside and throws the food away. She tells Andy and Jacob that her friend’s husband does not want her (Laurie’s friend) to see Laurie again.

On the other hand, Leonard Patz stares at another teenage boy. Sarah calls Duffy and tells her that she has some information to share. Laurie paints over the spray-painted words on the wall.

The third episode of ‘Defending Jacob’ finally picks up pace, something that the show has been severely lacking. More importantly, the episode provides some much-needed direction and what appears to be a compelling central theme: the murder gene. The episode is not completely flawless but manages to keep one hooked to the screen.

The episode finally pays off viewers’ patience. The meditative depiction of Newton’s close-knit suburban community finally has some bearing and impact. The Barbers’ trial by media is depicted effectively, and so is the stigma that the family faces from the community. Such topics have been tackled on screen before. However, their portrayal in ‘Defending Jacob’ proves to be one of the finer depictions. The third episode is also where the show’s investment in slow characterization pays off. One really feels for the Barber family as the odds start to stack up against them. The scenes involving Andy and Laurie cleaning the spray-painted words are especially moving.

Furthermore, the “murder gene” outlook surely proves to be an interesting spin. It sets ‘Defending Jacob’ apart, making it less ordinary, if not groundbreaking. It ought to be noted here that ‘Defending Jacob’ might have fared better had it not been promoted as a murder mystery wherein anybody could be the killer. If it had been promoted as a tale mostly about a family trying to prove their son’s innocence, viewers might have had more suitably attuned expectations.

While the episode does prove to be engaging throughout, ‘Defending Jacob’ still has a long way to go. Here’s hoping the mini-series is able to cash in on the “high” of the third episode, instead of falling back to its previously sluggish pace.