Derrick Barry From RuPaul’s Drag Race: Everything We Know 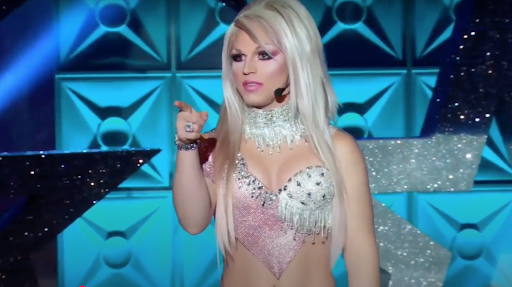 The newest spin-off in the ever-popular ‘RuPaul’s Drag Race‘ franchise, ‘RuPaul’s Drag Race: Vegas Revue’ is a six-part docuseries that follows six diva drag queens as they perform in the RuPaul’s Drag Race Live show. The series will no doubt have plenty of on-stage glamour and behind-the-scenes drama. One of the six queens to be featured in the VH1 series is Drag Race alum Derrick Barry. Here is everything we know about Barry?

Who is Derrick Barry?

Derrick’s full and real name is Derrick Prentice Barry is a 37-year-old full-time drag performer and American reality TV star. He was born and brought up in Modesto, California.

Derrick’s drag persona is not separate from his real-life because he keeps his actual name even when performing. Derrick is a professional Britney Spears impersonator and has been active since 2003 when he first dressed up as Britney for Halloween. He first saw Britney in her “Baby One More Time” video and then again live in concert in 2002. Derrick’s best friend back then was absolutely convinced that he looked like Britney and from there was born the idea to dress as Britney for Halloween.

Derrick, who has grown up with gymnastics and done extensive theatre in school, landed on the Vegas strip as a professional impersonator of Britney Spears. And he has been there ever since. There is no other career, apart from frequent reality TV stints, that Derrick has that’s separate from his drag life.

Because he was already an openly gay man, his family readily accepted his drag lifestyle. Derrick has a brother who looks very much like him (and frankly, resembles Britney even more than Derrick). His brother is married with two kids and they all seem to be a very close-knit group. Derrick’s family is also very accepting of his three-way relationship with two other men (one of who is a drag queen as well).

Derrick claims that for them, the throuple works because there’s no going behind each other’s backs. As long as they maintain proper open communication and don’t do anything to hurt anyone else, the drag queen says, it does not matter what other people say or what tags they put.

Derrick has been performing as Britney since 2004, so he’s a veteran on the Vegas strip. Performing in a long-term show like RuPaul’s Drag Race Live (which is performed at the Flamingo) is not something very new for Derrick. He has also competed on the third season of America’s Got Talent in 2008, but could not go past Quarterfinals. Derrick as Britney has starred in multiple music videos (like Eminem’s “We Made You” and Katy Perry’s “Waking Up In Vegas”). Despite having participated in several seasons and spin-offs of the Drag Race, Derrick has never won first place. But he still a fan-favorite alum. Apart from reality TV and a few acting roles here and there, Derrick also released a music single “BOOM BOOM” with Chris Cox on May 6, 2016.