15 Most Disturbing Movie Sex Scenes of All Time

Sex scenes in average to bad movies is commonplace because the writers know that they need sex and nudity for their movie to run. Basically, sex in such movies is sold purely for entertainment purposes and not artistic ones. But sex scenes in great movies are meant to supplement the story or the character. Some may consider films as a medium to entertain. But some film makers go beyond entertainment and want to shock the audience by showing them sexually unimaginable scenarios.

IMPORTANT NOTE OF CAUTION: The purpose of this article is certainly to not glorify violence of any kind. In fact, we are strictly against it. The purpose of this article is to bring to light the movies that consist of rape or sexual assault, so that the next time you are watching any of these movies with your little son or daughter or brother or sister, you should know that these are not appropriate for them. You MUST prohibit any person below 18 years old from watching these scenes. These are only meant for adults.

This Bernardo Bertolucci film remains till date one of the most controversial film ever made with one of the most controversial sex scenes ever filmed. The story is simple enough, as a middle-aged widower, Paul (Marlon Brando) falls in love with a Parisian woman, Jeanne (Maria Schneider). The most notable scene in the film is the rape scene where Paul uses butter as lubricant to anally rape Jeanne. As much disgusting as the scene is, it is important to note that Maria Schneider came out saying that she was under age when the scene was shot and was not informed about the scene beforehand by Brando or Bertolucci.

Right on the heels of the Serbian Film is Salo. Audiences and critics differ on whether this is a great film or simply a filthy one but I think it is a very important and an essential film in many ways. Set in the World War II era, the movie revolves around four fascist wealthy Italians who kidnap 18 teenagers and subject them to extreme violence, sadism and the most perverted sexual acts imaginable. Quite expectedly, extreme sexual acts have been filmed throughout the movie and each one of them is more shocking than the other. But since we are focusing on sex, the most disturbing scene would be when the teenage girls enter a dining hall to serve breakfast and one of them is brutally penetrated by a guy as the the crowd laughs and cheers at her cries of pain. One of the Italian fascist men gets aroused by this and lets the stud perform anal sex on him. This is the scene where you start getting a taste of what the entire movie is going to be about.

Teeth takes the concept of female sexuality and consent to a whole new level. Holding a 79% rating on RT, the film was loved by critics. The film follows Dawn (Jess Weixler) , a teenager who realizes that she is suffering from the mythical vagina dentata, meaning that her vagina has teeth. She discovers that in a subtly comic but squeamish scene. On a vacation with her abstinence group friends, she ends up making out with Tobey but doesn’t plan on going all the way. But Tobey insisting that they do, gets aggressive and forcibly penetrates her. In a gut wrenching, crotch clasping sequence, we can see Tobey screaming in pain as the teeth inside Dawn’s vagina slice off his penis. The scene is pretty graphic and disturbing and people who are easily fazed by gore won’t be able to stand it. Other notable mentions are two further scenes where she (or her vaginal teeth) manage to bite off two more penises.

Gasper Noe’s psychological horror drama isn’t short of any sexual explicitness. Told in a reverse chronological order, the events of one night unfold in the most brutal way in front of our eyes. Starring the irresistibly sexy Monica Bellucci as Alex, she encounters a pimp abusing a transsexual prostitute in a subway underpass. Upon seeing Alex, the pimp releases the prostitute and gets a hold of Alex. What follows is a brutal anal rape scene which lasts for 7 minutes of screentime. The scene is profoundly disturbing and has witnessed a few walk outs as well. Though the movie is so violent and cruel in its depiction, it is a film that has won numerous awards and is one of the best known films of its genre. 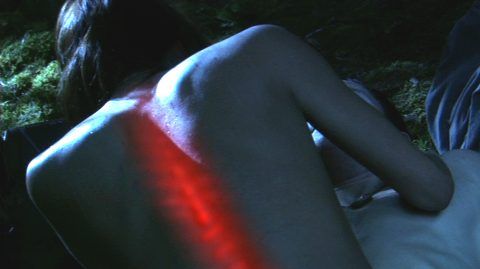 This is a misfire of a reboot and one of the worst cinematic experiences I have ever has in my life, but that doesn’t mean its sex scene is anything but interesting. Unlike most films on here, there is actual intercourse and most of the moment works like what is considered the norm when it comes to lovemaking. The act takes place between two cyborgs though, and that is where things start to get weird. I mean, it isn’t like they aren’t as human-like as is possible, but there is still something strange about the whole thing. And what’s more when doing it, their spines start to glow. Though painted with some god-awful lighting and cinematography, we can make out most of the moment through what we see on-screen. It isn’t very explicit, but it is something different in a film that may as well be one of the most passable pictures in existence. 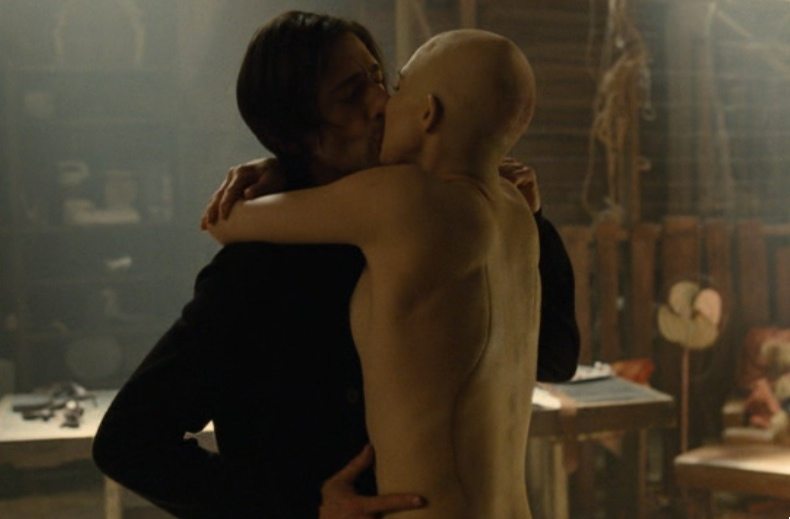 Oh, this is definitely the most abnormal film of the pile raked onto this list. Having to do with two scientists that create an animal-human monster, this absurd horror film sees it evolve as it slowly develops an upper hand over the couple that manufactured it. This includes rape and both physical and mental torture. I know I’m building this picture up to make it sound like something interesting, but it really isn’t. I was bored out of my mind save for a couple of moments… that involved sex. See, the way they go about it here is this strange triangle of lovemaking wherein everyone of the main players do it with each other at different times, and sometimes without the knowledge of the party left out. It’s not a treat in any way, and I definitely wouldn’t label it as erotic material, but it is worth checking out nonetheless, just because of how absolutely obnoxious it all is.

One of the most notorious pictures on this list, I’m frankly surprised that a film of this sort was even made. With the strange plot involving a female alien that wishes to have sex with anything in her sight, there’s nothing about it that screams ‘Hollywood Production’. Alas, that is what it is, and the sex scene in question is so gosh-darn off-putting. Taking place in the pool like our previous entry, the alien has discovered a perfect partner whom she as lured into the wet waters without his consent. Then they go at it, and it’s intense. The hard-R that the picture got isn’t too hard to explain, which gives you a fair idea about the type of lovemaking session you’re going to witness. The funny thing is, it only gets stranger. Suddenly, tentacles appear out of the alien’s body and sort of assist it in doing the deed. Thankfully, through this all, Natasha Henstridge remains quite the eye candy, making a really odd moment entertaining.

Everyone will agree that Lars Von Trier is a peculiar director. His movies though mainly revolve around sex and shocking the audience, they always have a tinge philosophical themes like existentialism coupled with social and political commentary. Antichrist is probably his most essential work. The story follows an aggrieved couple who are desperately trying to get in terms with their son’s suicide as he sees them having passionate sex. As the movie progresses, the husband (Willem Defoe) has weird visions and his wife (Charlotte Gainsbourg) manifests extreme sexual behaviour during their ‘therapeutical vacation’. Though the film is replete with many sex and masturbatory scenes, the one that stands out is towards the end of the movie. She proceeds to having almost forcible sex with him and suddenly smashes a wooden log against his scrotum knocking him unconscious. Coupled with a sense of grief and guilt she starts masturbating the aroused penis leading to an ejaculation of blood. The entire scene is stomach churning and what follows that is even more brutal. I wouldn’t recommend anyone this film before going to sleep or rather before doing anything !!!

Straw Dogs is a fairly underrated film, though countless filmmakers have cited the Sam Peckinpah classic as an inspiration. How many times have we heard from women that their husbands don’t stand up for them. This movie is about David Summer (Dustin Hoffman) a mathematician who has never stood up for anything in his life but when the time comes to defend his new house, boy he does that in style. Within this premise is a backstory of his wife Amy, whose ex boyfriend lives in the same town. The scene that repulses the viewer the most is when he barges into David’s house and has forcible sex with Amy. Being a feminist, what boiled my blood more was that midway through the heinous act, Amy is shown to be enjoying the act after which she is again forced to have sex with one of the exe’s cronies. This is the only part that ruins an otherwise perfectly great film.

Wes Craven’s directorial venture is heavily borrowed from The Virgin Spring (1960) in its narrative of rape and revenge. Mai and Phyllis, two best friends are heading out in the city for a concert and on the way they encounter a gang of perverted thugs. The thugs take them out in the forest and force them to do things that are not commonplace. Mari is told to pee in her pants and then forced to strip just to end up performing sexual acts with Phyllis. This might sound like just another exploitation film, but it is still considered by critics as a great film in a way that it defined and almost gave birth to a whole new genre of movies.

Rated as one of the best films of that year, Deliverance is truly a great movie in all respects. Four Atlanta men head out decide to go out canoeing. As expected, their entry into a small town isn’t welcomed by the locals and they decide to torture them for purely sadistic reasons. Ed and Bobby (two of the four men) get trapped on a bank and are surrounded by two local thugs. They tie down Ed and one of the men shockingly hits and rapes Bobby. To add to the humiliation he forces Bobby to squeal and act like a pig. Thankfully, the scene isn’t dragged on and ends up on a high note as both the thugs are killed by Bobby’s remaining friends. 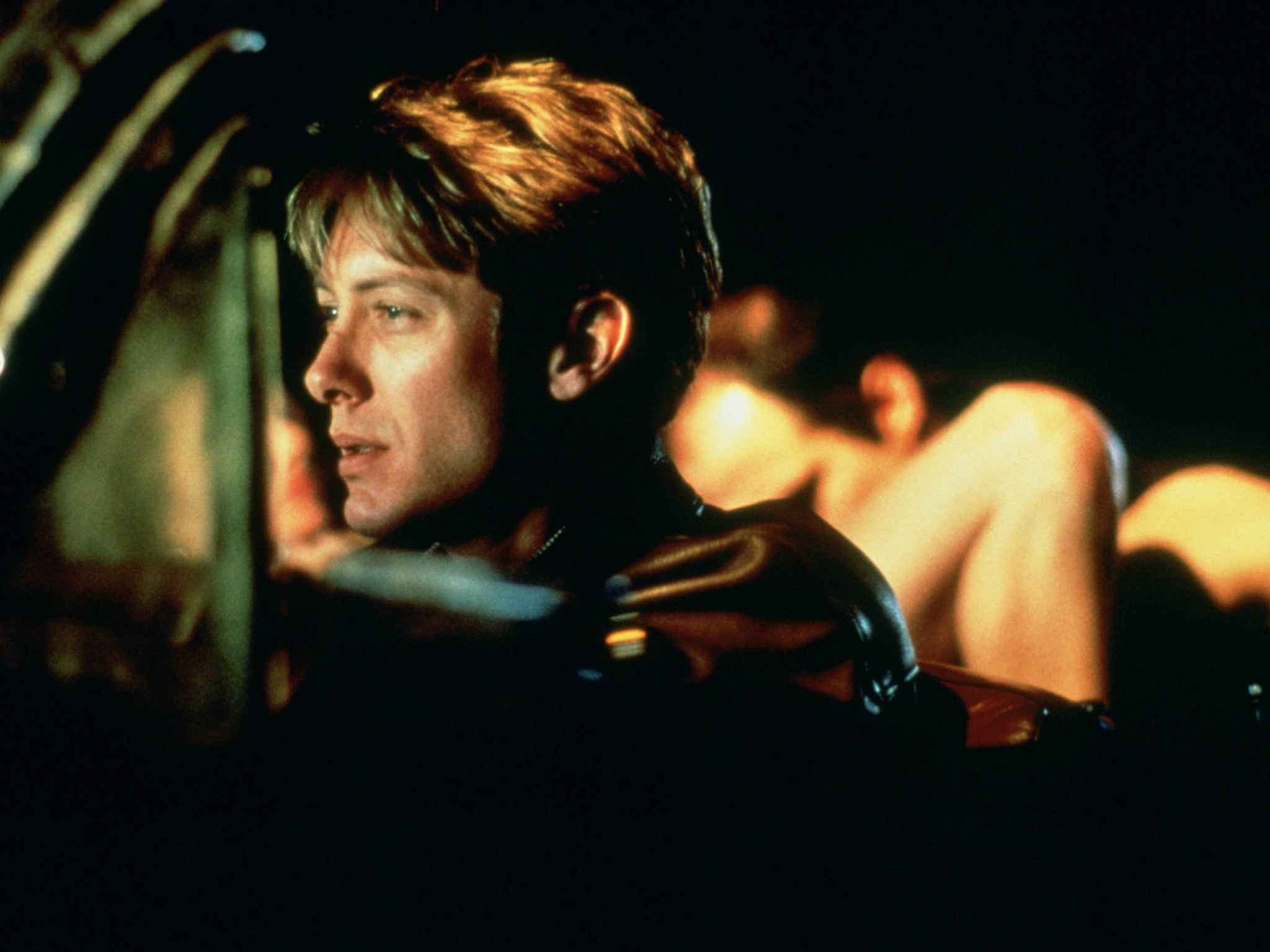 Not to be confused with the 2004 Oscar-winning flick, Crash is David Cronenberg at his most perverse self. Now, a film that even the Late Roger Ebert gives 3.5/4 can be considered a good film. To put it shortly, the film is about a couple and an allied group of fetishists who get aroused by car crashes. There are many disturbing sex scenes in the film but the one that stands out is between James Spader and Rosanna Arquette. She has her legs in braces but has a vulva like ugly scar her thighs. In one of the scenes, Spader’s character substitutes that scar for a vagina and simulates sex on it. The scene is one of the most disgusting in the film and even though the film can be praised for its in-your-face depiction of a paraphilia, this scene ruins it all. 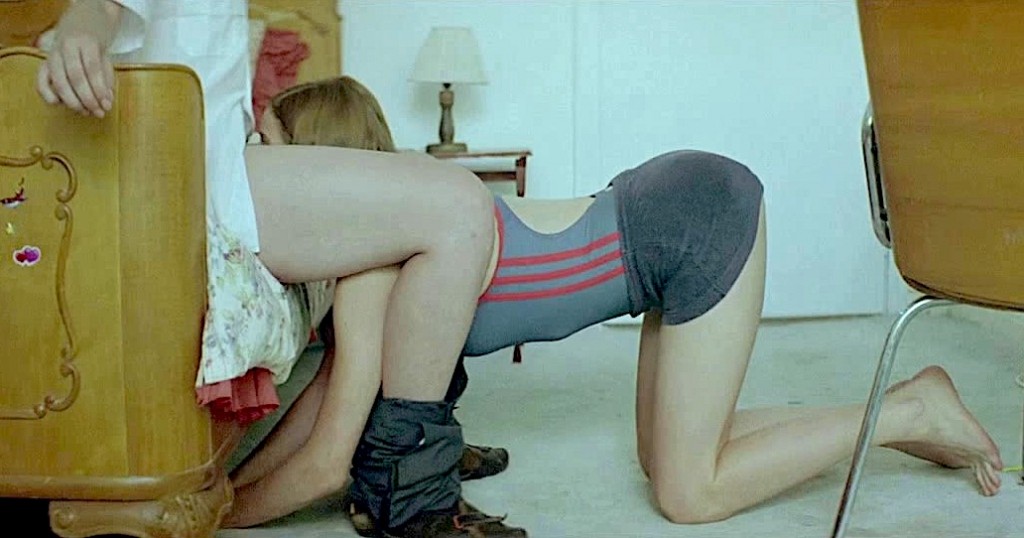 The less said about this incest scene the better.