Do Michi And Joel End Up Together In New Heights?

Helmed by Marianne Wendt, the Swiss-German series ‘New Heights’ is a hard-hitting drama about a farmer’s family as they cope with the farmer’s death. Looking at the ever-changing boundaries between the city and the village, the series probes into the Wyss family, who struggle to revive the family farm amidst piling debt. Following the show’s release, it attracted widespread acclaim in the media, thanks to its ambiance, characterization, soundscapes, and brooding visuals. Michi is the arguable protagonist of the drama, whose fast-paced urban life draws a contrast with the serenity of the village. However, you may wonder whether Michi and Joel end up together. In that case, we have your back. SPOILERS AHEAD.

Do Michi And Joel End Up Together?

Michi seems like a person stuck in the third tier of Maslow’s hierarchy of needs. He has all the physiological comfort and even an established career as a consultant in Berno. However, he longs for meaningful psychological connections with his family, colleagues, and strangers. Michi is also gay, which does not make his life any easier. However, towards the beginning of the series, Michi meets his new colleague Joel from Hamburg, and they embark upon a secret liaison. However, as Michi finds it comfortable in the closet, he does not let his colleagues know about the affair. Meanwhile, the colleagues get an idea, and Pablo even calls them “lovebirds” on one occasion. 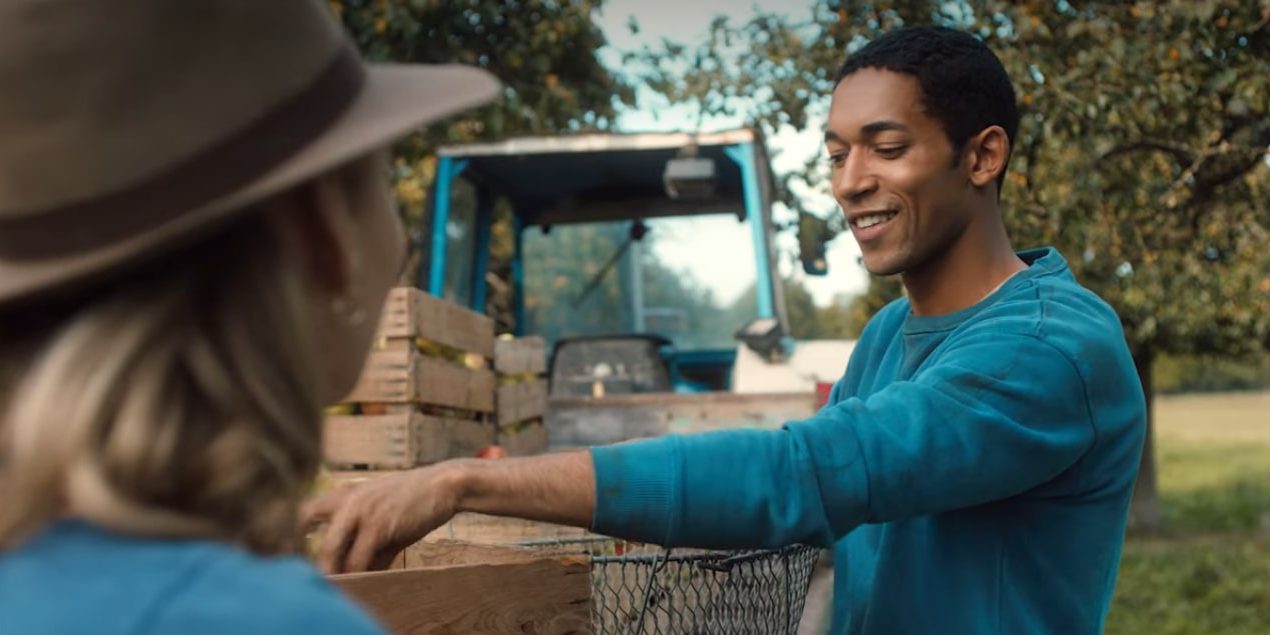 Michi tells Joel that his father is in logistics, but as Michi leaves the phone at the parking lot while hurrying to get to Kurt’s funeral, Joel gets to speak to Michi’s mother. Shortly after, he appears in Neumatt in person to deliver Michi his phone. Although Michi thanks Joel for going through the trouble, he comes off as quite distant. Later, Michi uses Joel’s father’s connections in the finance ministry to land a deal with the Chinese company. Although Joel agrees to undertake the task despite his conflicting ideals, he is furious at Michi for manipulating him. Consequently, Michi decides to take Joel back to his farm and introduce him to Katherina as Michi’s lover.

At first, Michi and Joel seem like a dynamic couple complementing each other, but the cracks and fissures become gradually apparent. While Michi does not divulge anything to Katherina in the barn, Michi’s past flame village vet Dome looks at Joel, and he seems to have guessed that they are dating. When Katherina asks Joel about Michi, Joel feels uninvited and says he does not know him well. However, Michi spills the fact that he and Joel are dating the following morning, and Katherina’s reaction as a mother is one of mild shock.

Joel is a vegan, although Michi opposes the milk substitute products for reasons he thinks are professional rather than personal. When Michi’s boss still thinks of moving forward with the idea, Michi takes it personally. Moreover, with Pablo stealing Michi’s presentation, the boiling tension within Michi reaches a zenith. In the elevator, he aims a punch at Pablo’s nose, and despite the apology, he is let go. Afterward, feeling dejected, he tries to storm into Dome’s family, and Dome’s wife leaves him after knowing he is gay. However, at the end of the season, Joel and Michi have made up their minds about moving to Hamburg.

Joel is about to pursue studies in Hamburg, and Michi can relocate with him. But Michi tells Joel that he needs a lot of space, both in the apartment and his life. When Joel agrees, the lovers roam the urban skies, high on virtual reality. Towards the finale, Katherina has made up her mind to sell the farm, as Michi is going to Hamburg, and Lorenz has failed his test. But Michi has a reversal of heart in the final moment, as he does not board the car with Joel. He unloads his baggage from the vehicle, returning to the family. Therefore, we believe that Michi and Joel do not end up together. Since Dome has no family now, Michi may end up with Dome and is in the village.

Read More: Is New Heights Based on A True Story?