Dorothy “Dottie” Finelli Murder: Where is Heath B. Russell Now? 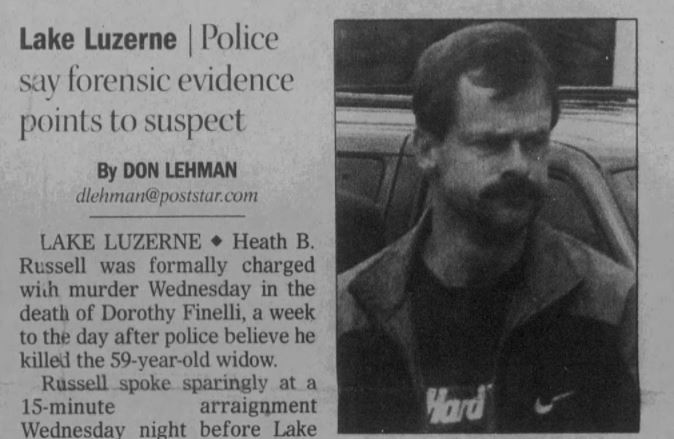 Investigation Discovery’s ‘Betrayed’ is a series that explores those chilling matters wherein the dreams and lives of innocent individuals are snatched away from them by someone they genuinely trusted — a family member, a friend, a co-worker, or their lover. With the help of reenactments and one-on-one interviews with those closely involved, each story is brought to us in the fictionalized, first-person perspectives of the victims. So, of course, its season 4 episode 7, titled ‘Unholy Alliances,’ profiling the brutal murder of Dorothy “Dottie” Finelli, is no different. Curious to know more about this case? We’ve got you covered.

How Did Dorothy “Dottie” Finelli Die?

At the age of 59, Dorothy “Dottie” Finelli had built a good life for herself on Gage Hill Road in Lake Luzerne, New York. By working as the secretary at the First Baptist Church in Glens Falls and being an active part of her little community, she had become quite popular in the area. The fact that Dottie was clearly family-oriented, particularly when it came to her daughter and grandchildren, and was known to be a big Adirondack IceHawks fan, also played a role in her content life. However, this shifted on October 23, 2002, when she suddenly disappeared.

Dorothy was last heard from in a telephone call to her daughter that same day and was reported missing by members of the Church when she didn’t show up for work on October 24. Once deputies arrived at her home, they noticed that her vehicle was still in the garage, and there was evidence of a struggle in her yard. Immediately suspecting foul play, authorities began a thorough hunt for Dottie with the aid of trained sniffer dogs. On October 27, her body was found in a pond in Warrensburg, with a large rock on her back. She’d been beaten, strangled to death, and dumped.

Soon after Dorothy “Dottie” Finelli’s remains were recovered, investigators zeroed in and identified their sole suspect, Heath B. Russell. As the former live-in partner of Dottie’s daughter, Vicki Hayes, he appeared to have both means and motive. After all, the ex-pair had separated just months before the homicide primarily because of his abusive nature, according to Vicki’s testimony. Dottie allegedly knew about it and had warned her daughter to be safe, which was proved by the last message she’d left on her machine, asking Vicki to get a restraining order following Heath’s threats.

Heath, a then 36-year-old self-employed cement contractor, was arrested on unrelated charges of grand larceny, accused of writing a $3,400 check on a closed account on October 27 itself. Within days, after DNA evidence and blood splatter found in his pick-up truck linked him to Dottie’s slaying, he was also charged with second-degree murder. By that time, Heath had already lawyered up, so detectives could not question him in the way they wanted. Hence, this matter went to court soon after. The defense tried to maintain his innocence throughout the hearings but to no avail.

Where is Heath B. Russell Now?

Heath B. Russell was convicted in May 2003 but faced a retrial following a verdict by the Appellate Division of the State Supreme Court that pointed out a juror’s potential prejudice. During the earlier proceedings, Vicki testified to her turbulent relationship with him and even added that his bond with her mother wasn’t great. Heath’s attorneys tried to imply that she had motive as well by directing the discussion to her debts and the fact that she was the sole beneficiary of Dotti’s $300,000 estate. They further attempted to accuse Vicki’s ex-husband, but he had a concrete alibi.

As per statements from a Sargent who’d questioned Heath on October 24, 2002, he did not have an alibi, unlike others. While he revealed that Heath had admitted he’d visited Dotti’s home on October 23 to pick up lumber at roughly 4 p.m., only to discover that she wasn’t home, some of his friends testified that they’d been together at a restaurant from 4 to about 6:30. It also came to light that Heath had “power-washed” his truck the following morning. Eventually, he was again found guilty in 2005 and sentenced to 25 years to life behind bars. Thus, today, he’s incarcerated at the maximum-security Green Haven Correctional Facility in Stormville, New York, where he’s expected to remain until, at least, his parole eligibility date in October 2027.