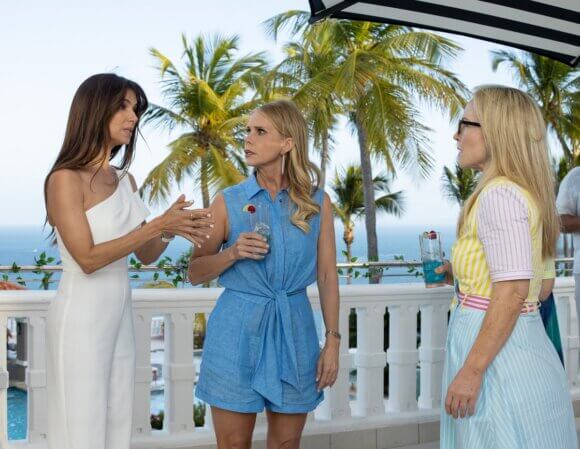 Created by Elizabeth Craft and Sarah Fain, ‘Fantasy Island’ is a Fox fantasy sequel to and spin-off of the original ABC series of the same name, which aired between January 1977 and May 1984. The plot revolves around Elena Roarke (Roselyn Sánchez), the grandniece of Mr. Roarke from the 1970s series and the new caretaker of the island. Elena, with the help of the relatively small staff, helps the guests who arrive on the island to live at least a version of their fantasies.

In season 2 episode 1, ‘Tara and Jessica’s High School Reunion / Cat Lady,’ the narrative, as always, focuses on multiple subplots while also developing aspects of the overarching narrative. Tara (Rachael Harris) and Jessica (Cheryl Hines) have been friends since high school. They faced severe bullying there but survived it together. The ill-treatment peaked at the prom when the popular girl in school promised them she would go to the party with them if they rented a limo, only to acquire one on her own and throw milkshakes at the girls. Tara and Jessica’s fantasy is to return to school for their 30th reunion and make their bullies and classmates acknowledge them and their accomplishments. Meanwhile, Andi (Jasika Nicole) comes to the island wanting to know if her ginger cat, Baron BoBo VonBigglesworth III, loves her as much as she loves the animal. Here is what you need to know about the ending of ‘Fantasy Island’ season 2 episode 1. SPOILERS AHEAD.

The second season begins by demonstrating a significant improvement in the relationship between Elena and Xavier (John Gabriel Rodriquez). They have started secretly dating and don’t want the staff to know about it yet. However, Ruby (Kiara Barnes) is as perceptive as always and starts to suspect that there is something between the two. Amidst all this, the new group of guests arrives on the island. Tara and Jessica’s high school friendship has become a professional partnership, where they are so focused on the company that they have built together that they have little time to do anything else. As for Andi, she has let her past experiences negatively affect her future and now seeks reciprocation of love from her pet.

The island has a way of reminding people of who they are by giving people what they need. In this episode, Tara and Jessica find out what they could have been if they had made certain choices differently, while BoBo becomes a human and demands to be called Baron, much to Andi’s frustration. Elsewhere on the island, the relationship between Gina and Ruby comes to an abrupt end as the latter realizes that Ruby is still far from accepting who she truly is.

The Island helps the two women come to terms with their reality and move on with their lives. If they had done everything correctly, Tara would have become a successful author, entrepreneur, and single mother, whereas Jessica would have married her high-school crush and devoted her life to charity. In the course of the episode, the girls realize that they are holding each other back and mutually agree to part ways. This doesn’t necessarily mean that their friendship is over, but the fact that they learn to live without each other.

Does Andi Learn to take risks?

Andi has let her fear of the world beyond her doorstep control her for so long. She prefers the company of her cat because she knows that her emotional investment in a pet will always be reciprocated. However, when BoBo becomes Baron and reveals that he has certain opinions about how she leads her life, it leads to Andi re-evaluating her life with Ruby’s help. She eventually finds romance in a member of the island staff and reconciles with BoBo, who shows that he genuinely cares about her and she is the most important human to him.

Do Gina and Ruby Break Up?

It seems both overarching relationships in the show reach a milestone of their own in this episode. After learning that Elena didn’t go to her prom, Xavier takes a dance lesson and takes her to Tara and Jessica’s reunion, effectively announcing that they are a couple.

Meanwhile, Gina seems to have exhausted Ruby not meeting her halfway through their relationship and finally speaks to the other woman. Gina asserts that she and Ruby will be friends before severing the romantic ties. While it’s understandable where Gina is coming from, Ruby has her reasons for not yet being ready. It hasn’t been that long since she lost Mel, and a residual effect of the grief is bound to remain. Love is a complicated thing; even if the physical attraction goes away, the other aspects of human connection remain, and those are the things that still seem to bind Ruby to Mel.