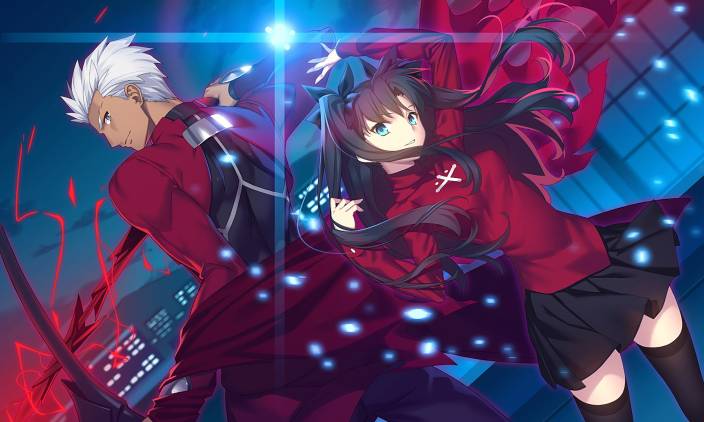 You know there’s that tingling sensation you get right before you are going to watch something you have been waiting for since a very long time. Well, I had a similar feeling right before I started the first season of ‘Fate/ Night Stay’. Visual novel adaptations always get me all hyped up. Though I’m a little doubtful at first about how they are going to turn out on-screen, I still keep my mind open and try to take in the entire experience. The downside of creating an anime out of a visual novel is that the show has to take a more linear approach towards the story while the novel is like a game where one has the freedom to drift back and forth. Despite all the odds, some visual novel adaptations just blow your mind, one of them being ‘Steins; Gate‘, of course.

While the story of a visual novel usually outshines the one portrayed by the anime, it is the other way around when it comes to character development and that’s where ‘Fate/Stay Night’ shines. All the characters have some very distinct traits; they all have their own background stories, they have objectives in the story and even their relationships have a lot of depth. And it’s not just their personalities that make them so amazing but also the way they have been animated with emphasis on their expressions and body language. You can tell a lot about most characters just by looking at them, which is something that can make a lot of difference when the characters have a lot going on in their minds.

The biggest buzzkill about ‘Fate/Night Stay’ is its storyline and while it does show some promising potential initially, the flame slowly diminishes into the lack of time and budget. At times, it almost feels like the anime should’ve been released with a brochure or something because it keeps on introducing you to terms you have no clue about. A lot of the times, you also have to solely rely on your memory to just make some sense out of certain things. By the end, it becomes pretty obvious that the anime has become a victim of an overly ambitious plot that brings only a little substance to the table.

But contrary to the common belief, I do believe that ‘Fate/Stay Night’ wasn’t all that bad and I was wishing for it to last a little longer. I appreciate all the efforts made by the creators because living up to a classic visual novel is no easy task; but still, they managed to make something that comes a little close to it. If you have never read the visual novel of ‘Fate/Stay Night’, then you might enjoy it a little more because you will not have any real expectations from it.

‘Fate/Stay Night’ starts off by first reflecting on the background of the main protagonist whose name is Shirou. Shirou’s family gets killed in a strange inferno that comes out of nowhere, leaving him as the only survivor. He was rescued by a sage named Kiritsugu Emiya. The sage then decides to adopt him and though he is initially against teaching the boy anything about his art form, the boy’s persistence forces him to teach him some of his magical abilities.

Years later, post Kiritsugu’s death, Shirou is cleaning a school where he works part-time and this is when he encounters two superhuman beings. These super humans are basically slaves of other sages and have been sent there to kill Shirou. Shirou somehow manages to survive their attacks and gets away from that place, but he is heavily injured. Surprisingly, Shirou is able to recover from that as well but his battle against the servants is far from over. One of the servants comes looking out for him again and in the heat of the moment, Shirou decides to summon his own servant, who is a Knight named Saber. Soon, he is forcefully thrown into a battle of servants and their respective owners where the last man standing will get the fifth holy grail. All his life Shirou has been nothing but a humble pacifist but it’s about time he changes his own principles so that he can reach his full potential and unlock his true destiny.

Starting off with the story, all the arcs have been very well portrayed but a lack of proper alignment really messes up the entire flow of the anime. The story overall is not bad at all and clearly, a lot of efforts have been put into making it interesting. But it seems like the creators were bounded by the lack of enough budget and time which forced them to overdo certain aspects of the show. The action part of the anime carries itself pretty well and it’s those parts that actually make the entire story a lot more interesting than it truly is.

Now coming to the best part of the anime — the animation. If I could use one word to describe it, it would be “gorgeous” because the animation is one of the best I have ever seen. The color pallets are just out of this world and even if you compare it with the most recent anime, it still proves to be top-notch. Unlike most others in the action genre, ‘Fate/Stay Night’ never goes overboard with the CGI and uses it very subtly during the epic battle scenes. It is definitely the kind of anime where you just cannot settle for a 720p video quality.

The sound department is not exceptional in any way but it’s not all that bad either. Some background songs are memorable while others are not all that great and when it comes to the sound effects, it is at times a little inappropriate for a particular scene but mostly they are spot on. The voice acting is quite brilliant and even the English Dub of the anime is definitely worth watching.

I have a very mixed opinion about the characters of the anime because I do feel that most of them have been made really well. If you look at them individually without considering their relationships with other characters, then you will actually love them for who they are. This is because a lot of efforts have been put into their backstories and their personalities. The only problem is that their relationships have been forcefully crammed up in the 24 episodes which were clearly not enough. The relationship between Rin and Sakura has also been deleted halfway through the plot for no reason. A lack of time has indeed made a big impact on this anime and has ruined even the most interesting aspects of it.

Overall, just halfway through the show, it becomes very clear that the director had high ambitions and even started the anime really well but got weighed down by the unforeseeable constraints. For obvious reasons, there was a lot of hype around the anime but it just failed to live up to it because of its shortcomings. I would still go ahead and recommend it to everyone because despite its glaring flaws, it’s still pretty good. Or maybe I’m just overlooking the bad side of it because I can clearly see all the efforts that have gone into it. But anyway, if you don’t give it a try, you’ll never know what the whole hype was all about.

The English Dub of ‘Fate/Stay Night’ is available on Crunchyroll.