The True Story Behind ‘Fire in Paradise’, Explained 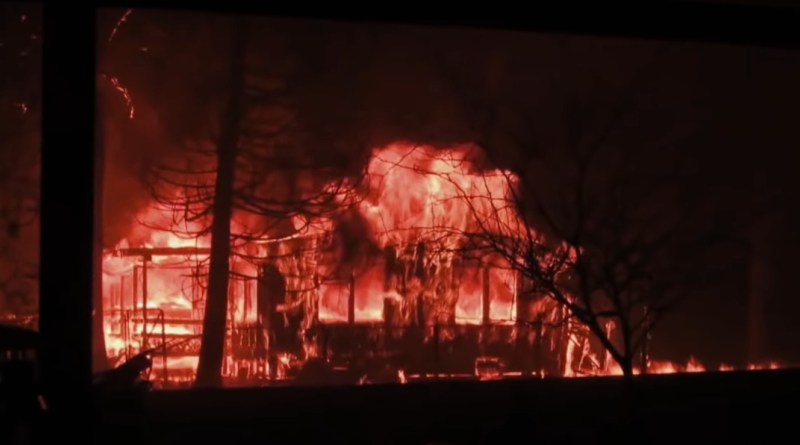 California has been plagued with wildfires for the longest time. Almost every year, the brave firefighters and other emergency services have to put their resources together to combat raging flames, while ensuring the safety of the residents. However, the situation has only been getting worse with time. The most pertinent example is Camp Fire, the wildfire-turned urban firestorm that destroyed the community of Paradise, in 2018. Netflix’s documentary, ‘Fire in Paradise’ captures the chaos that erupted and tells us the story of this horrific incident.

The documentary of the catastrophic event comes from the team of Drea Cooper and Zackary Canepari, who have intended it to be more of a portrayal of a community victimized by the Camp Fire, than an investigation into the fire itself. It is marked with their characteristic style, making it a harrowing watch. Moreover, the documentary manages to remain respectful, while evoking the right emotions in the viewer. However, ‘Fire in Paradise’ shies away from actual details of the fire, opting to go with subjective experiences to capture the devastation of the event.

While it is successful in achieving what the documentary sets out to do, viewers might be left with some pressing questions about Camp Fire, which is shown in ‘Fire in Paradise’. Don’t worry, we have got you covered, as we bring you the true story behind ‘Fire in Paradise’.

Why is it Called Camp Fire?

In ‘Fire in Paradise’, Beth Bowersox, a 911 Cal Fire dispatcher, brings up the fact that she received one of the first calls about the fire that would rock the small community. She also mentions that she was responsible for the name Camp Fire while noting that she has had to deal with people asking her why it was called the Camp Fire. So, why was one of the deadliest wildfires in US history given an innocuous name like Camp Fire?

Well, the fire got its name from the point of origin, or where it started, that is Camp Creek Road. The fire started near the Poe Dam, and the location is accessible via Camp Creek Road, which is above the Poe Dam. Bowersox mentions that there are protocols about naming fires the way they are named, and thus Camp Fire got its name from the origin location. Notably, Cal Fire says that naming fires based on the location allows fire officials to track and prioritize incidents by name.

How did the Camp Fire Start?

Fires do not start without any reason. Most fires in the region have been due to human errors. In fact, several fires in California have started due to power lines. So, what started the deadliest wildfire in the US? Well, after a meticulous and thorough investigation, the Cal Fire (California Department of Forestry and Fire Protection) determined that the wildfire was caused by electrical transmission lines owned and operated by Pacific Gas and Electricity (PG&E) located in the Pulga area.

While PG&E de-energized portions of Paradise to prevent this possibility, they could not shut down their 115kv transmission lines located near Pulga. Not only would this have been a manually intensive task, but it also would have cut off transmission to a lot of individuals, disrupting the everyday process. Moreover, before we pinpoint the PG&E power line as the official cause of the fire, we should note that Cal Fire still lists that the cause is undergoing investigation.

Even if we proceed with the information that the power line caused the fire, we have to account for why the fire spread so quickly, taking on massive proportions. Thus, it becomes important to study the terrifying science behind the wildfire itself. It would be necessary to note here that the Camp Fire burned so fiercely, that at one time, it was burning 80 acres a minute.

Stephen Pyne, a wildlife expert at Arizona State University attributed the deadliness of the Camp Fire to urban conflagrations, which is the real change in recent years. Pyne logically follows his observation through, remarking that earlier fires destroyed scattered enclaves or exurbs, whereas now, they are plowing over cities, making them infinitely deadlier. Neil Lareau, an atmospheric scientist at the University of Nevada has provided an insight into the weather conditions that were directly responsible in allowing and in fact, encouraging the Camp Fire to increasingly rage on. He has commented on how the downslope easterly winds, coming off the crest of Sierra Nevada, as compared to the normal westerly winds, was an important factor in helping the wildfire spread. Although the easterly winds are a natural phenomenon, they bring down the relative humidity of a place.

This brings us to the second aspect that fed the fire, that is, fuel. In November, California is extremely dry, meaning that the vegetation is primed to go up in flames. On top of this, the easterly winds further dehydrate the vegetation. Technical terms like evaporative demand drought index come in, but basically what you need to understand is that the atmosphere is thirsty, so it pulls water out of the vegetation and puts it in the ground. The experts have concluded that while the natural easterly winds drove the fire, it caused its own wind, increasing the rate of the conflagration. Hot, dry and windy, are the three checkpoints needed for a massive fire. The Camp Fire ticked off all three.

So, why did the urban conflagration take place? Urban firestorms are not supposed to happen due to building guidelines and other safety measures that were put in place after the horrific San Francisco fire of 1906. However, Paradise was not spared because of the many embers that rushed ahead of the main fire. Any of these embers could set off a small fire of its own, thanks to the overall dryness of the environment. As a result, the firefighting forces were overwhelmed. ‘Fire in Paradise’ mentions this as a firefighter recalls how there was no way for them to get ahead of the Camp Fire.

The firefighter in the documentary seems to be in agreement with experts like Lareau in attributing the larger cause of Camp Fire to climate change itself. While the spark might have been set off by a power line, the fire itself raged due to the dry environment. Lareau firmly blames the trend of everything getting warmer. The atmosphere gets thirstier as it becomes warmer and like a giant atmospheric mosquito, climate change happens to be sucking California dry. As a result, we are seeing unprecedented and unimaginable wildfires, with 20 of the deadliest fires taking place in recent years.

While one would be right to hope that a disaster like Camp Fire does not take place again, the truth is that with climate change, even cities in California are not safe anymore, and things just might get worse from hereon.

How Many People Died in the Paradise Fire?

As mentioned, the Camp Fire was one of the deadliest fires to hit California, big enough to destroy an entire small town. ‘Fire in Paradise’ does not shy away from showing us the casualties, including a particularly gruesome image captured by a civilian who could not help his friend. When everything is taken into context, there were three confirmed injuries to fire personnel and civilians. There have been 85 fatalities including civilians and fire personnel. Over 18,000 properties have been destroyed including residential, commercial and other properties.

The Aftermath of the Camp Fire:

After the Camp Fire was contained, Cal Fire teamed up with several other agencies to get the community back on track. While there have been drives to reclaim Paradise, many residents claim that they are unable to return to the place from where they narrowly escaped death. The accounts are heartfelt and evident towards the end of ‘Fire in Paradise’.

With several people displaced to nearby places like Chico, they are trying to get on with their lives. Officials in Paradise say that the people from the community are scattered all over the county because it is not possible to just move to the next city and find housing. It is tough for those who have lost their homes and jobs, but as ‘Fire in Paradise’ shows, the people are ready to move on. However, they cannot bring themselves to forget the horrors of Camp Fire, and they would like the rest of the world to remember their ordeal as well.