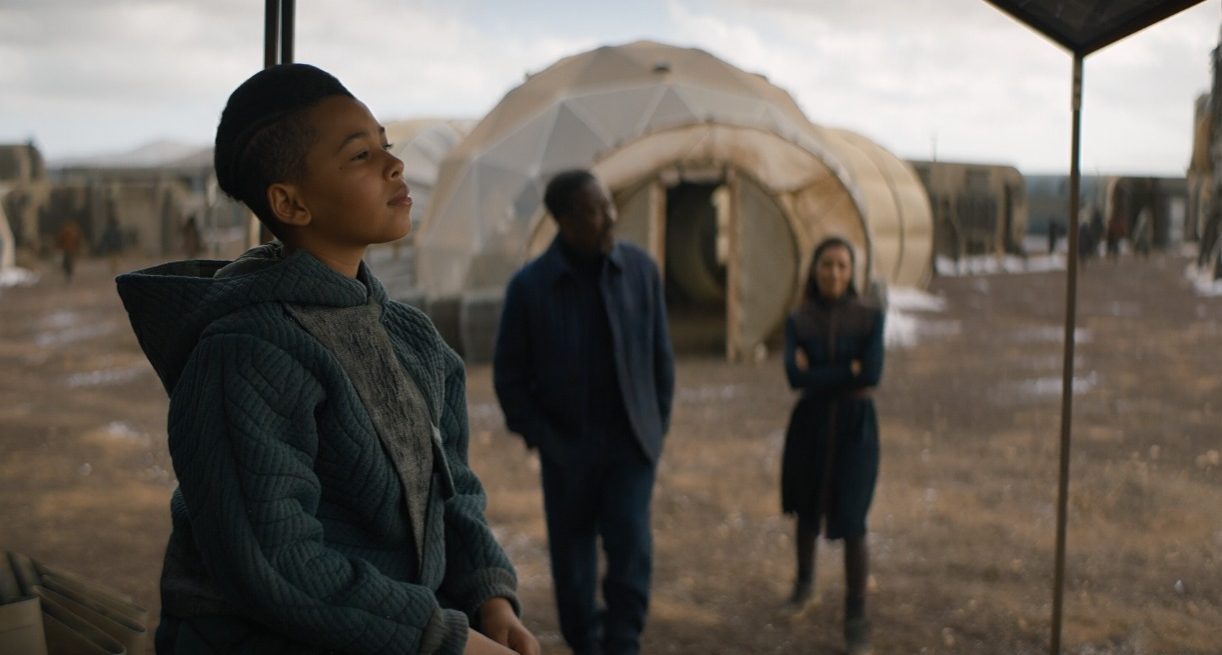 ‘Foundation’ on Apple TV+ continues its epic saga after the shocking death of Hari Seldon in episode 2. Based on the novels of the same name by Isaac Asimov, the sci-fi series tells the epic story of the struggle between the prophetic mathematician’s followers and the Galactic Empire that stretches over many centuries.

Episode 3 begins to fill in some much-needed gaps in knowledge and tells us how the overbearing clone monarchy of Trantor was established. We also get to see the progress made by Seldon’s followers on their remote outpost on Terminus. However, the episode’s closing scenes portend trouble and chaos. Let’s take a closer look at ‘Foundation’ episode 3 and see where it leaves us. SPOILERS AHEAD.

The episode opens 400 years ago on Trantor, in the final days of Cleon the 1st. Accompanied by his ageless companion Demerzel, he looks out to the Starbridge being constructed on Trantor and bemoans dying before he can see it function. We are then taken 400 years later, where Brother Dusk, the eldest clone of the Empire, counts his final days. It has been 19 years since the attacks brought down the Starbridge on Trantor, and the shell of the massive structure still orbits the planet. The final ceremonies for the death of Brother Dusk take place, and the newborn clone of Brother Dawn replaces him.

Meanwhile, the group formerly led by Hari Seldon has established a colony on Terminus and has begun working on the Foundation. They work on selecting what knowledge is to be kept so that it can be passed on to future generations. The story on Terminus now centers on Salvor, who guards the scientific outpost and seems to have a special connection with the Vault. All other residents remain afraid of the mysterious structure as it continues to harm anyone who gets too close to it.

Foundation Episode 3 Ending: Who Captures Salvor? What is Salvor’s Backstory?

The scientists of Trantor soon discover three gunships nearing their planet. On closer inspection, they appear to be from the fringe planet of Anacreon, the very same planet that the Empire attacked as a response to the Starbridge attack. Being a largely unarmed research outpost, the group on Terminus tries to reach out to the Empire to alert them of the approaching ships. However, they find their communication channels disabled.

At night, Salvor is awakened by a feeling of suspicion and goes out to check the perimeter of their outpost. There, she sees a young boy running in the distance and follows him. He enters the hull of an old spaceship with Salvor close behind. However, the boy is then nowhere to be seen, and she soon finds herself held hostage by a strange woman from another planet.

Considering the gunships heading ominously towards Terminus are from Anacreon, it is likely that the woman who captures Salvor is also from there. Anacreon is regarded as a barbarian world by the king of the Galactic Empire, who largely blames its people for destroying the Starbridge. Since Terminus and the Foundation team are technically part of the Empire, it is possible that forces from Anacreon are now attacking them as revenge for the attacks on their planet by the Empire.

Salvor was seemingly born on Terminus and is an outspoken skeptic of Hari Seldon’s plan. Having never met the man and perpetually frustrated by the scientists’ passive approach to danger to the planet, Salvor takes her post as Warden of the colony very seriously. She is regularly seen patrolling its perimeter and is the first to assume the worst when the Anacreon ships show up.

Salvor also seems to have a special affinity to the Vault. Unlike any of the other residents of the planet, she can get close to the mysterious structure. As seen in episode 1, she has also gone close enough to touch it and admits to feeling it beckoning her. Salvor also considers herself different from everyone else on the planet and is used to feeling like an outcast. Her mother, a staunch follower of Hari Seldon, hopes that the eccentric Salvor is possibly a crucial part of Hari’s plan. However, when she reveals his calculations of psychohistory to Salvor, the girl cannot make sense of them.

How Long Have the Settlers Spent on Terminus? What is their Progress?

The episode gives us a glimpse of Trantor 19 years after the attack, at which time a new clone of the Galactic emperor is born. We then see the newest member of the cloned dynasty at 17 years of age, telling us that about 36 years in total have passed. Considering the settlers under Hari Seldon were sent to Terminus to begin work on the Foundation soon after the attack on Trantor’s Starbridge, we can estimate that the scientists have been on the fringe planet for about 40-45 years (accounting for another time-jump during which Salvor grows up).

In this time, the group has set up a basic colony by harvesting parts from the massive ship that brought them to the planet. They also seem to be sticking closely to Seldon’s plan and are focused on ensuring that all the right parts of civilization’s cumulative knowledge are saved before the apocalyptic “fall,” which will eventually wipe out civilization for many centuries.

Who is Cleon? How Long Has He Ruled Trantor?

Cleon is the name of the iconic Galactic Emperor that ruled Trantor 400 years ago. In the episode’s opening scenes, we see the original Cleon (Cleon the 1st) bemoan, dying too soon. From Demerzel’s explanation, we realize that before dying, Cleon decided to have himself cloned and made an infant version of himself the Galactic Emperor. This legacy has since been passed on, with every subsequent Galactic Emperor and ruler of Trantor being a clone of the previous king, and in effect, a clone of the original Cleon. Hence, all successive kings — apart from their age-related titles Dawn (infant), Day (middle-aged), and Dusk (elderly) — are also named Cleon.

The most recent “Dawn” sibling that we see is Cleon the 14th, meaning that the clone dynasty has ruled Trantor for 13 generations, with the 14th ruler in waiting. From the timestamps given, we can also decipher that 417 years have elapsed since Cleon the 1st. Throughout this time, the seemingly immortal Demerzel has been on the side of every Cleon, acting as an advisor and keeper of traditions.

Though it is hinted that she does this out of love and loyalty for the original Cleon, the advisor also seems to wield significant power and knows more about the Galactic Emperor’s lineage than the ruler himself. Demerzel could potentially affect how the Galactic Empire is ruled. It is also quite likely that the idea of cloning himself was initially supplied to Cleon the 1st by Demerzel.