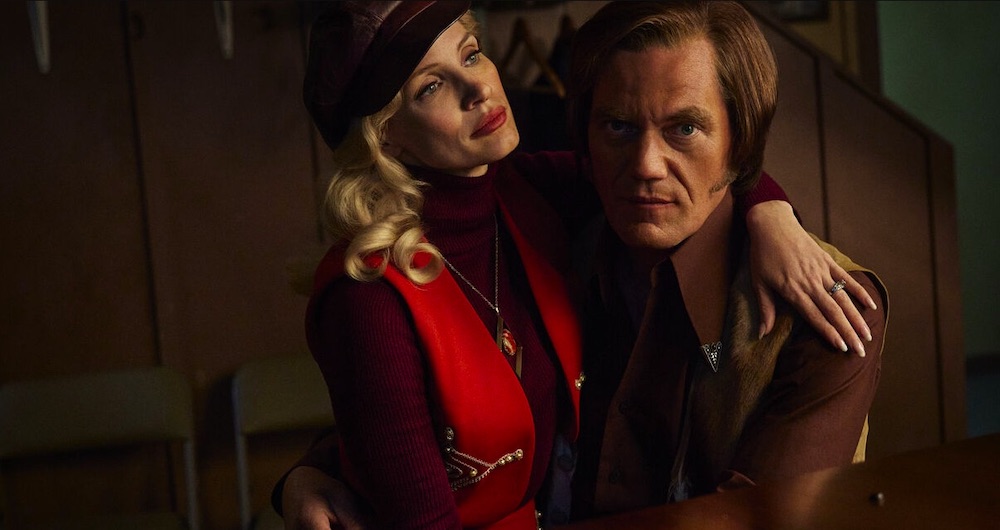 Showtime’s ‘George and Tammy’ explores the turbulent marriage of George Jones and Tammy Wynette. The fourth episode marks the beginning of the end for them as George falls deeper into his alcohol addiction, which forces Tammy to explore other possibilities, even though she doesn’t like them. With both of their careers moving in different directions and their personal lives in shambles, it only makes sense that they put some distance between each other. However, for two people whose personal and professional lives are intrinsically involved with each other’s, it won’t be so easy to break their bond. Here’s what the ending means for them going forward. SPOILERS AHEAD

George Jones has not only fallen off the wagon but he has also run so far away from it that this time, even Tammy doesn’t expect him to find his way back. It’s Christmas and all she wants from him is to be sober. Despite his transgressions, Tammy doesn’t want their girls to see George as a bad person.

Knowing how hard it is for George to battle his addiction, Tammy comes up with a way to distract him. Before leaving the house, she takes away the keys to all of their cars. With the girls and Tammy out of the house, George starts to drink again, but when his bottle is smashed, he decides to drive to a liquor store. Because all the keys are gone, he doesn’t have a car to drive in. So, he takes the lawnmower.

Later, when George comes back home, Tammy has already sent her daughters away because she doesn’t want them to see their father drunk. It turns out to be a wise decision because that night, George becomes extremely violent. He hits Tammy and shoots a gun around the house destroying everything. The police are called and George is taken away and put in a straightjacket. Tammy doesn’t visit him. Instead, she goes on the tours that she’d already made a commitment to. And to be on the safe side, she buys a new place for herself and the girls.

George’s alcoholism had always been a problem for him. For Tammy, he tried to curb it and told himself that her love is the only thing that could change him for the better. But, as Tammy later says, marriage doesn’t change anyone. It doesn’t take long for George to fall back into his ways, especially when he feels the pressure of going back to singing and being the star that everyone expects him to be. For George, songs come from a place of deep sadness, and when he is happy, he finds himself unwillingly to go back to his life as a singer. But the rest of the world doesn’t want him to slip back into the shadows, including Tammy.

After a long spell of sobriety, George picks up the bottle when he has a huge show to perform at. With none of his singles at number one for a long time, he starts to feel insecure about his talent and doesn’t want to go out and be ridiculed. This pushes him back into his addiction, and it makes things so bad for their marriage that Tammy reaches her breaking point. She gets divorce papers drawn up and buys a new place to live in after George’s last incident. When George finds them, he is infuriated. He leaves the house and goes right back to the recording studio, where he records a new song.

Once again, he finds that pain and sadness elevate his talent. They give a dash of realism to his songs, which is what his fans appreciate. And this further proves his belief that no one wants him to be happy because a happy George is not the George Jones that everyone is looking for. This scene gives the audience a sense of what’s to come for George now. With the way he acted on Christmas, destroying his home as well as his marriage, one would think that he has hit rock bottom. But that was not the case. In reality, things only got worse from here, especially after George and Tammy got divorced. The one lifeline that George had been holding on to was Tammy’s love for him. So, when that walks out of the picture, he falls even further.

The final scene also shows Tammy and George desperately trying to reach out to each other but not finding one another. They are grasping at straws at this moment and both of them know that their relationship has run its course. This still doesn’t change the fact that they love each other. The problem is that George is too troubled to bring any sense of stability to their lives, and Tammy doesn’t have the strength to keep going.

Previously, Tammy received a hysterectomy after her daughter Georgette’s birth. This led to a lot of complications for her, and she started relying on pills to get her through the day. However, it did nothing to ease her pain, and by the end of this episode, she is back at the hospital for another surgery. This is another moment where she is going through something emotionally and physically painful and her husband is not by her side.

As Tammy whispers George’s name, we see the pain and heartbreak in her eyes. She knows that there is no saving their marriage anymore. She has to look out for herself and her daughters, and being with George is never going to get any easier. So, even though it is a very painful thing for her to do, it is essential for her survival. Her surgery, in this case, acts as a metaphor for her marriage. No matter how much she wants to take the pain and ignore the problem, she will have to make the tough decision if she wants to come out of it alive and kicking.