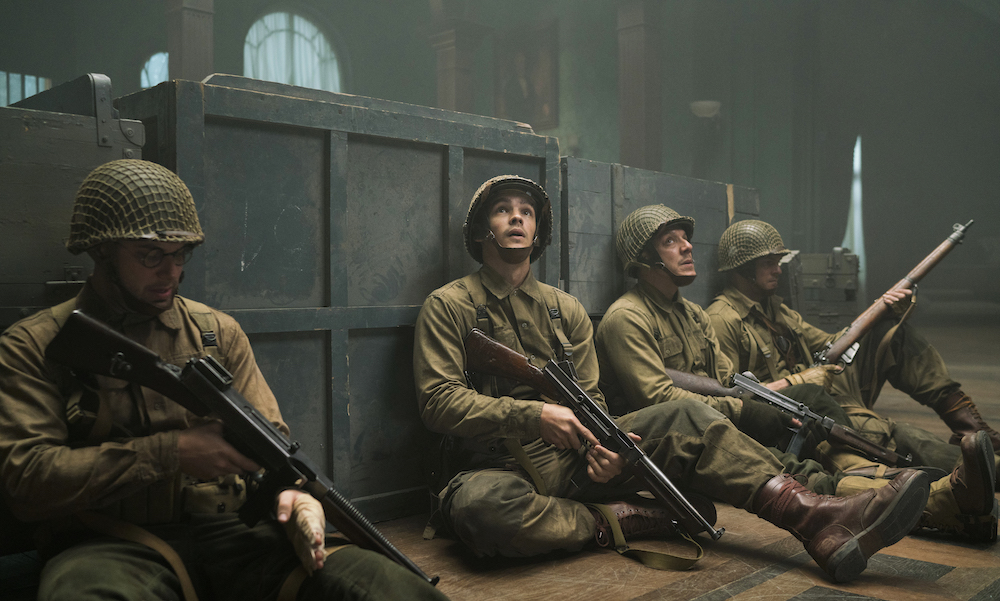 Written and directed by Eric Bress (‘The Butterfly Effect’), ‘Ghosts of War’ transitions from one genre to another several times throughout its 90-minute runtime. It’s a war drama in the first act, a horror in the second, and a science fiction in the third. While the movie is more or less predictable because of how Bress employs jump scares and traditional war film tropes, the final twist is genuinely surprising. It gives the otherwise conventional film layers of complexity and makes it quite entertaining. SPOILERS AHEAD. 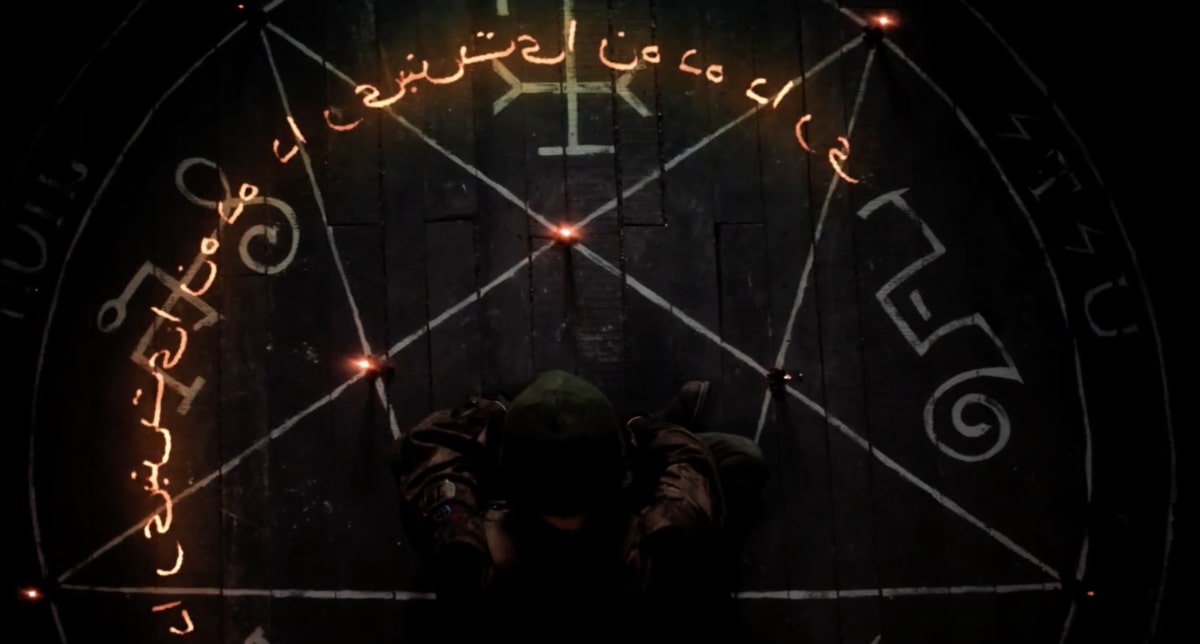 In 1944, at the height of World War II, five US soldiers, Chris (Brenton Thwaites), Kirk (Theo Rossi), Eugene (Skylar Astin), Tappert (Kyle Gallner), and Butchie (Alan Ritchson), make their way through the French countryside towards their newest assignment, which is to guard a mansion until further notice. Before the Allied forces take over, the house has been used by the Nazi high command. When they arrive there, they discover that the members of the squad that they are supposed to replace at the mansion are seemingly spooked by something and can’t wait to get out of there.

This confuses Chris and his men. The supplies are full, and the palatial house offers every comfort and luxury imaginable. When they question the other crew, the answers they receive are evasive at best. It doesn’t take them long to determine the real reason for the previous group’s hasty departure. The house is haunted by the spirits of its original owners, a family of four, who were killed by the Nazis apparently because they were giving shelter to Jewish people.

The son (Kaloyan Hristov) was drowned. The daughter, Christina (Yanitsa Mihailova), was hanged. The father, Mr. Helwig (Shaun Toub), was doused with kerosene and burnt alive in front of his wife (Laila Banki). The five American soldiers start getting odd messages like “I have no legs” through Morse codes. Later, a demonic voice screams at them that if they try to leave, they will die. One night, the Nazis attempt to take back the mansion. Although the attack is squashed, Butchie is mortally wounded after trying to protect the others by falling on a grenade.

Before Butchie dies, he repeatedly screams, “This isn’t real,” “It was us,” and Remember.” The remaining soldiers try to leave the mansion but find out that they can’t, as they always end up walking the same roads. They go back to the mansion, hoping that performing the last rites of the Helwig family will free them of the loop. Unfortunately, it doesn’t. They get attacked by the ghosts. However, suddenly, the ghosts start glitching, and Chris wakes up in the real world.

In the end, it turns out that none of the things that Chris and his men experienced until that point in the film is real. They are modern soldiers who were deployed in Afghanistan. During a mission to extract a high-value informant, they all suffered severe injuries and have been in a drug-induced coma since. They were placed in a World War II simulation to help them heal psychologically and mentally.

Dr. Engel is the man in charge of the off-the-record facility where Chris and others are kept. He is also represented in the simulation as the Nazi major whom the American soldiers encounter and kill. What Dr. Engel and his team didn’t foresee is that the subconscious minds of the injured soldiers will continue to remind them that the simulation isn’t real. The Morse code about not having legs is Chris’ subconscious reminding him that his legs had to be amputated following the mission. Kirk trying to scratch his legs is the result of a phantom itch, as he too lost his legs.

As Chris correctly figures out, the demonic voice on the radio is not a threat but a warning, which lets them know if they leave the simulation, they will die. Butchie’s self-sacrifice during the German attack was stimulating enough to wake him up from the coma. The fact that he gets injured during the Afghanistan mission while doing the very thing must have also played a crucial role in his awakening. According to Dr. Engel, Butchie died after seeing his physical condition, but before he did, he tried to make the others remember what actually happened.

Because it is a simulation, the soldiers find themselves walking on a loop. The diary belonging to a German soldier that Eugene finds appears blank at first to Chris for the same reason. As the memories of their real lives begin to invade the simulation, the text in the diary suddenly becomes Arabic, and the Helwigs, an Afghan family. In the film, Vetrulek is an ancient Islamic curse employed by a victim of an atrocity towards people who stand by and do nothing.

Although it is entirely fictional, made up just for the film, it gives the horror aspects of ‘Ghosts of War’ a theological angle. In Afghanistan, the group’s mission was to move a physician and his family to a secure location in Kabul. The intel the doctor provided led to the capture of some of the top leaders of ISIS in the country. But the terrorists found out that he was working with the American forces. They arrive right before the extraction, forcing the team and the physician’s CIA handler to abort the mission.

They hid and watched helplessly as the members of the Afghan family were killed, in an exact manner as the Helwigs. After the terrorists were gone, the team came out of hiding. It was then that the mother rushed towards them, with an explosive in her hands. The ensuing explosion is what led to their current conditions. Before she dies, she curses them with Vetrulek. It has followed them into the simulation, tormenting and punishing them because they didn’t do anything to protect the Afghan family.

Return to the Simulation

After regaining his memories, Chris realizes what is happening and convinces the doctors to put him back into the simulation, so he can save his crew. However, he loses all his real-world memories during the transition and wakes up in the same forest as the opening scenes, with the same stranger covered in shadows watching him, and Chris asking, “What do you want?.’

The simulation versions of the team members are all resting in the same circular pattern as their real-life counterparts. Evidently, the simulation has undergone a restart. With his memories completely wiped, Chris doesn’t realize this, and is bound to relive the horrors of this digital hell once more along with his friends.