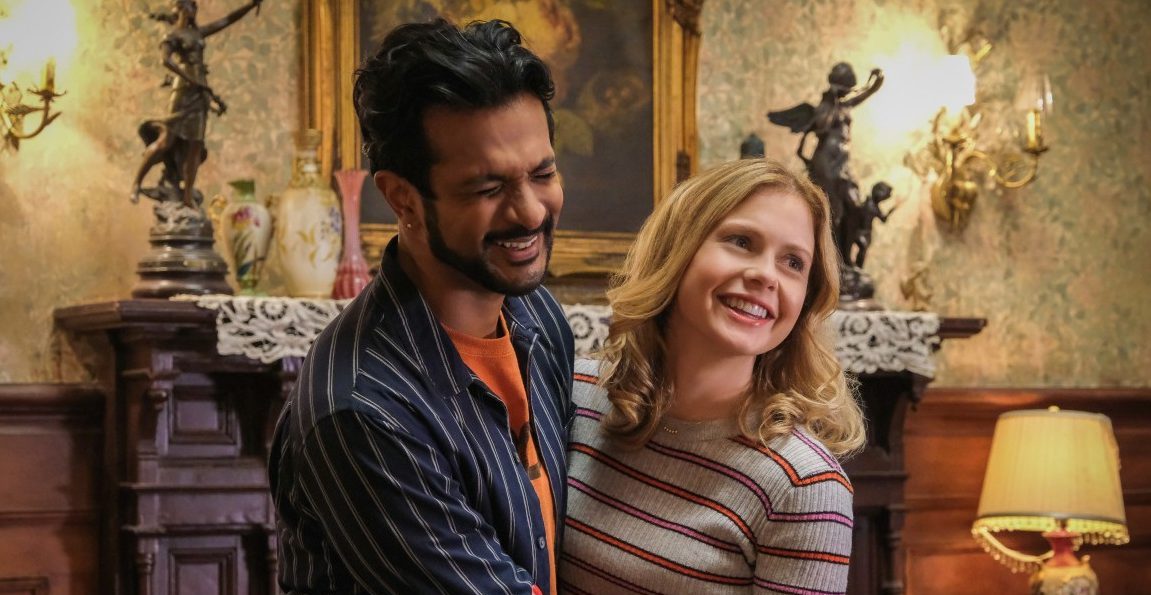 Created by Mathew Baynton, Simon Farnaby, Martha Howe-Douglas, Jim Howick, Laurence Rickard, and Ben Willbond, ‘Ghosts’ is a sitcom based on its eponymous British counterpart. The series revolves around Samantha and Jay, a married couple from New York, who suddenly inherits a dreamy countryside mansion. They plan to convert it into a bed and breakfast, but to their shock, the pair discovers that the property is haunted by several oddball ghosts who died there.

To make matters hilariously complicated, Samantha has a near-death experience that allows her to see and hear them. Thus begins a side-splitting battle of wits between the ghosts and the couple. Fans love the popular show for its unique concept and entertaining characters. If you’re a fan, too, you must be curious to find out whether the show will return for its second outing. Well, here is everything we know about ‘Ghosts’ season 2!

‘Ghosts’ season 1 premiered on CBS on October 7, 2021, and concluded its run on March 3, 2022. The inaugural season features a total number of 15 episodes, with a runtime of approximately 21-22 minutes.

Now, let’s find out more about the second season. The good news is that the network has officially renewed the show for another season on January 24, 2022. Kelly Kahl, President of CBS Entertainment, confirmed the second season and praised the excellent performance of the debut season. In a statement, he said, “Joe Port and Joe Wiseman, together with a breakout cast and exceptional writers, have done a superb job of adapting Ghosts for the U.S. and absolutely making it their own. This smart and charming show is delivering new creative highs, not to mention scaring up new audience highs, every week.”

With the sophomore season being greenlit by the makers, it wouldn’t be long before they start the production process. When it will land on the network shall be determined by the filming and post-production plans, the availability of the cast and crew, as well as the programming schedule of the network. If everything works favorably, ‘Ghosts’ season 2 can be expected to arrive sometime in Q4 2022 or Q1 2023.

Ghosts Season 2 Cast: Who can be in it?

Season 2 will see Rose McIver and Utkarsh Ambudkar reprising the roles of Samantha and Jay, the protagonists. The returning cast might also include Asher Grodman as Trevor, Richie Moriarty as Pete, and Sheila Carrasco as Susan AKA Flower. In addition, Danielle Pinnock (Alberta), Brandon Scott Jones (Captain Isaac), Rebecca Wisocky (Hetty), and Hudson Thames (Crash) are expected to reappear in the upcoming season.

Ghosts Season 2 Plot: What can it be About?

In season 1, New Yorkers Samantha and Jay Arondekar move into their newly inherited countryside mansion and set about converting it into a bed and breakfast. Unbeknownst to them, the property houses several ghosts who died on the grounds in the past millennium. The spooky residents of the mansion are against the couple’s plans and thus try to unsuccessfully scare them away. However, one of their botched attempts causes Samantha to almost die after falling from the stairs.

Samantha survives but gains the ability to see and hear the ghosts, whom she refuses to acknowledge initially. After a few hiccups where the ghosts try to sabotage Jay and Samantha’s plans, they begin warming up to the couple. Samantha introduces the ghosts to social media and the internet, which causes tiny trouble with Jay’s sister, Bela. The Arondekars hold a Viking funeral for Thorfinn, while Hetty tries to escape the mansion in Jay’s body but in vain. Later, Samantha and Jay try to unite Sasappis with the ghost of his long-distance crush, Shiki.

Moreover, Pete comes to terms with his wife and best friend’s betrayal that happened before his death. He eventually falls for Alberta, but she refuses to reciprocate his feelings, causing him to seek the help of Cholera victim Nancy. Elsewhere, Sam reconnects with her mother’s spirit and finds her closure. As the season ends, the group faces some problems created by the ghost of Hetty’s husband, but she eventually banishes him to hell. On the other hand, Sasappis showcases his rich heritage, while Sam makes Thorfinn seek help from a therapist when he experiences night terrors.

Season 2 shall most likely showcase new escapades of the Arondekars and their paranormal buddies and depict whether Pete is finally able to woo Alberta or not. Furthermore, as the bed and breakfast attracts more guests, it shall pose some uproarious challenges for Jay and Samantha. Other story arcs that might be explored include Bela’s newfound belief in the ghosts, Hetty causing more defiant mischief, and the pasts of the ghosts being explored further.