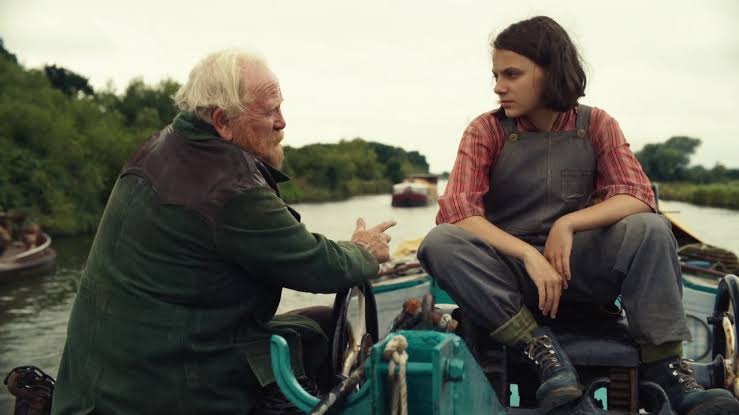 There are two things that drive a story. Well, actually, there are a number of things on which the art of storytelling depends, but there are two basic things that you absolutely need if you want people to be interested in the tales that you are serving. The first and foremost is the characters. Likeable, hateable, lovable or despicable- as long as there is any sentiment that the audience attaches to them, they will want to know more about them.

The second thing, which is rather trickier, is the mystery. Obviously, there is something that the protagonist or the antagonist wants, and this is what sets the course for a story. And you can have infinite secrets and cryptic prophecies and the obscure relationships between characters. But until you know how to reveal them, until you time it out, until you know exactly when and how to deliver them, no secret will be as surprising or breath-taking or impactful as you might have meant it to be. Philip Pullman knows that, but it seems like the television adaptation of his books does not.

In the last episode, we saw Lyra getting captured by the Gobblers. ‘The Spies’ begins with her release. Tony Costa and Benjamin find her while carrying out their own investigation. They take her to the boats where Gyptians from all over have come to find a solution to their problem- the missing children. Meanwhile, Mrs Coulter tears apart the Jordan College in search for her, making threats of all sorts to people of all sorts. She will not stop until she finds Lyra, and why she is so obsessed with the little girl becomes clear too. Meanwhile, Lord Boreal looks for Stanislaus Grumman.

There are two types of people watching ‘His Dark Materials’. There are those who haven’t read the books, and for them, the show seems to be on the right track. Every episode brings something new on the table, be it a new character, an old secret, or a different world. The story moves at a great pace, tackling so many things at once that you don’t even know how one-hour flies by. And what’s better is that with every episode, Lyra’s journey becomes even more exciting and dangerous, and you just can’t wait for her next adventure.

Then there are the ones, who are probably the majority of the audience, who have read the books. These are the people who know the story inside out, and if not the spin-off books, they have at least read up on the His Dark Materials trilogy. Despite being aware of every single secret in Lyra’s world and that of the others, they tune in to the show because they want to see the story they have loved so much materialising on the screen.

To BBC and HBO’s credit, there is no dearth of splendour and grandness in the show. The sets and the props and the daemons are all meticulously created, and it is beautiful. As it moves further North, we can expect it to get bigger and better. The actors are great, too. Especially Ruth Wilson, who just keeps getting better and better at being Mrs Coulter. She is a fine mix of sadness and psychopathy, and we can see the danger and desperation in her so clearly. And that scene, where we finally understand why her daemon is a monkey, well, damn! But she is not enough to save the show that seems adamant at spoiling the rich storyline that has been set for it.

It had become clear with the second episode that ‘His Dark Materials’ will not follow a chronological order. While staying true to the path laid out in The Northern Lights aka The Golden Compass, it took a minor detour to set the course for The Subtle Knife, which is the second book in the series. And we didn’t have a problem with it. Until now. It’s not that we don’t want to meet Will Parry as soon as possible, but this doesn’t mean that we want it at the cost of all that’s good about His Dark Materials’ secrets.

In the first episode itself, I had noticed that despite being good on all accounts, the show seemed to be in a hurry. With the second episode, it slowed down from a sprint to a jog. But then, in today’s episode, the haste resurfaced. And there is only one question in our mind about that: why? It’s not that there is any shortage of content, then why the rush? This approach would have worked better had it been a film, where you have to contain as much as possible in 2-3 hours. You’d need to sprint then. But a television series is a marathon, and no one ever won the race by dashing in the beginning.