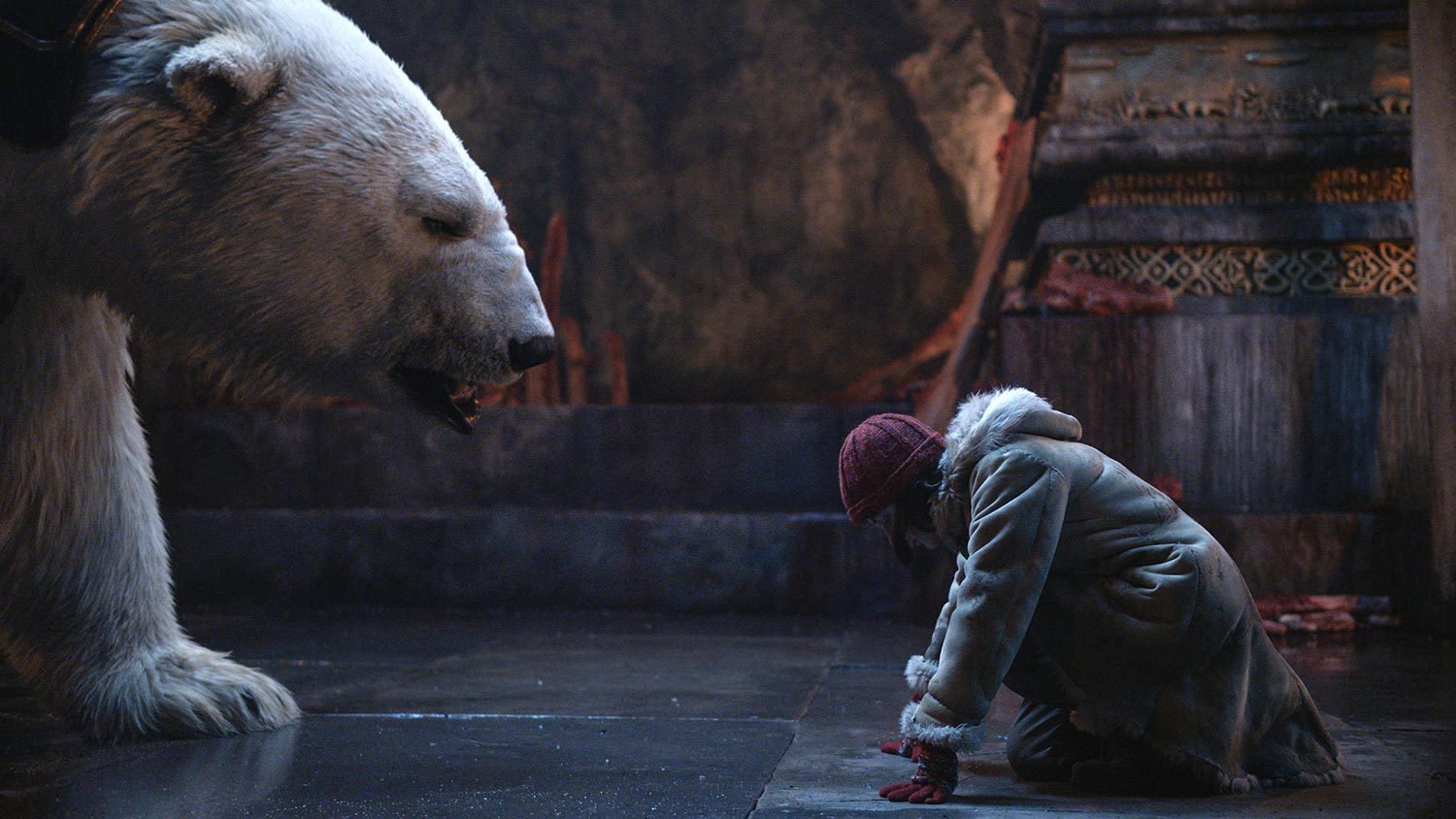 After seven weeks of taking us back and forth into the world of Lyra, ‘His Dark Materials‘ is almost there to wrap up its first season. We know all the characters pretty well now and have seen them grow over the arc of the season. ‘The Fight to Death’ takes another giant step towards that. It gives us a hint of the horrible fate of some and alarms us against the true face of others. All in all, it sets the stage for the finale that, expectedly, should take your breath away.

After freeing the children from Bolvangar, Lyra continues on her journey towards her father. However, after the attack of the cliffghasts, she falls off the balloon and is separated from Lee Scoresby and the others. She survives the fall, but before she can figure out where she is, a bear appears. And it is not Iorek. She is taken to Svalbard and thrown into a jail cell. There, she encounters a scholar who tells her that Asriel, too, had been in this prison, but he managed to trick Iofur and got a lab for himself.

Since both of her parents have already tricked Iofur, Lyra doesn’t take time to follow into their footsteps and comes up with the lies of her own. Fortunately for her, the bear king is too blinded by his greed to see her tricks. Meanwhile, Iorek Byrnison makes his way to Svalbard and comes face to face with Iofur. A deadly fight ensues and only one bear must survive.

Parallel to this, things pick up pace for Will as well. Another visit from Charles Latrom makes his mother nervous and she visits him at school. When they come back home, it becomes clear that someone has been looking for something and all that his mother ever talked about suddenly becomes real for Will. He leaves her in a safe place and goes back for his father’s letters. He comes face to face with the people who have been terrorising his mother for so long.

In its penultimate episode, ‘His Dark Materials‘ handles a number of things at once. The first and foremost is the fight between the bears. Dafne Keen’s understanding of Lyra has allowed her to ease into the character, and with each episode, she only gets better at it. This also holds true for the transformation of Lyra from Belacqua to Silvertongue. The writing and acting have come together to deliver that superbly. But the same can’t be said about the backstory of the bears. While the acting holds its ground, the writing fails to capture the essence of the complicated status of Iorek in his own home, the place that he was supposed to rule.

The visuals are, once again, a feast for the eyes. The sweeping scenery of the North, the magnificence, as well as the horror, of Iofur’s castle- everything has been captured brilliantly. No matter what ups and downs there have been in ‘His Dark Materials’, the visuals have always been top-notch. Another spectacular thing that we witness in the books is the fight between Iofur and Iorek. It is long and detailed and exciting. The show, however, cuts it short.

It is one of “the moments” of The Northern Lights, and all these weeks, I had been waiting for it. But when it was finally here, it fell short. It is understandable that some things get lost in translation in the book-to-screen adaptations. But to deliver one of the defining moments of the season, you have to do more.

Where it fails to stay in sync with the books, ‘His Dark Materials’ makes up for by adding its own version of some things. Mrs Coulter doesn’t have as much time in the books as she gets on the screen. All thanks to Ruth Wilson, every time she comes on the screen, we are grateful. She manages that balance between malevolence and vulnerability, and it is one of the best things about the show. The return of James McAvoy as Lord Asriel is a welcome sight too. However, Roger might not agree with it!

With just one more episode left to conclude this season, I would say that ‘His Dark Materials’ has managed to prove itself a worthy adaptation of the story that we all love. It certainly could have been better, but it has tried to be good enough. For the times that it has failed to hit the mark, it has also delivered some great things. Hopefully, in the next season, they learn from their mistakes and give us a reason to keep coming back to it for more.