How and Why Was Ron Sisman Killed?

‘The Sons of Sam: A Descent into Darkness’ is a four-part documentary series from Netflix that chronicles Maury Terry‘s research into the Son of Sam killings that happened in the 1970s. Maury theorized that these killings were perpetrated by more than one person and claimed that the murders were linked to an underground satanic cult that went far beyond just these slayings. The information he had collected from various sources also alleged that the death of Ron Sisman, a successful photographer from Manhattan, New York, was connected to this cult. So, let’s find out what happened to Ron Sisman then, shall we?

How Did Ron Sisman Die?

Ronald Sisman was a 39-year-old photographer who lived in a duplex apartment on the third floor of a building in the Chelsea section of Manhattan. He was a rather prolific lensman who operated two photography businesses out of his house. On Halloween night in 1981, Ron was with his girlfriend, 20-year-old Elizabeth Platzman, when they were attacked at his home. Ron and Elizabeth were brutally beaten and then shot in the back of their heads. Ron was reportedly shot four times while Elizabeth, thrice. 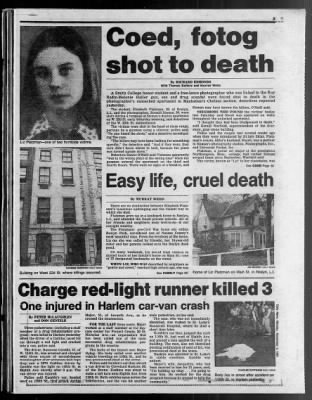 The house had been ransacked, and a .25 caliber handgun that was registered to Ron appeared to be missing. Their identification was removed from their bodies. The police speculated that the attacker or attackers might have known Ron since there were no signs of forced entry. Ron had also applied for two gun permits because someone had broken into his apartment before, and he feared for his safety.

The initial investigation leaned towards the possibility that the intruders might have been looking for drugs because the house was turned over and the furniture was torn apart. In the previous year, Melonie Haller, an actress, had accused Ron of attempting to force her to take drugs. But the charges against Ron were dropped eventually because Melonie didn’t cooperate with the authorities. But they discerned that those two cases were not connected. The investigation hit a dead-end beyond that.

Later on, a prison informant claimed to the police that David Berkowitz, the infamous Son of Sam, had told him about the murder before it happened. David allegedly mentioned that this was going to be carried out by the satanic cult that he was a part of. It was alleged that the murder of Stacy Moskowitz, Son of Sam’s last victim, was captured on film and that Ron Sisman was the one recording the murder from a distance. On the show, it is stated that there was another informant who contacted Maury, claiming that he was a part of this cult.

He mentioned that Ron and his girlfriend were murdered by the cult and ransacked the house because they were looking for the snuff film. In a 1997 interview with Maury, David also mentioned something similar. He talked about the presence of another van at the time the shooting took place. When Maury asked him whether Ron was the one who was recording it, he said that Ron did want to do some filming that evening. Beyond that, David was vague and did not divulge any new information. At the time, there was no concrete proof that backed up these theories and claims, and as a result, the murders of Ron Sisman and Elizabeth Platzman remain unsolved to this day.