How I Became a Superhero Ending, Explained 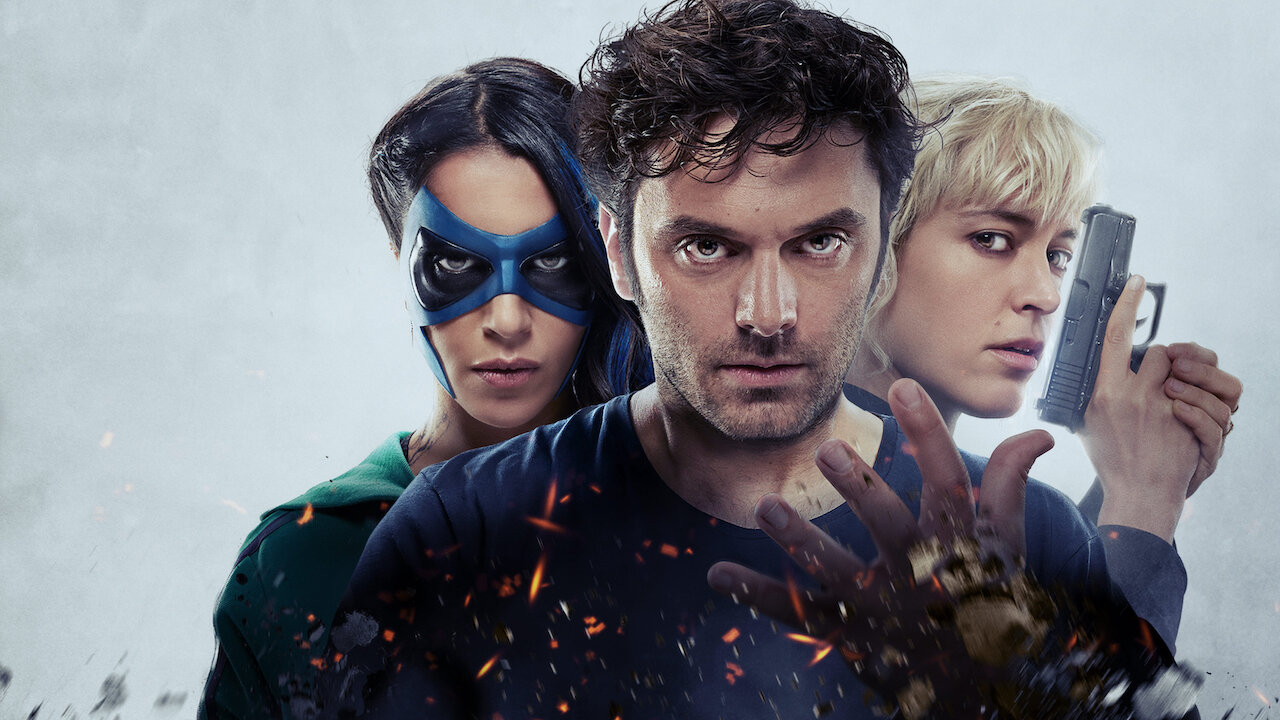 ‘How I Became a Super Hero’ is a French superhero film that steps away from the glamour usually associated with the genre and instead leans towards la vérité (or realism). The film grapples with the frightening question of what would happen if superpowers could be sold illegally like drugs and introduces us to a world where retired superheroes go to therapy because of their traumatic experiences with superhuman powers. Some even decide not to use their powers and keep them hidden. What else is this strange alternate world hiding? And what happens to the sinister madman harvesting powers from unsuspecting heroes? Let’s take a closer look at the ending of ‘How I Became a Super Hero.’ SPOILERS AHEAD.

How I Became a Super Hero Plot Synopsis

The film opens in a dark alley in Paris, where a small-time celebrity magician named Eclipso gets violently kidnapped. We later find out that he is, in fact, a superhero with the power to temporarily blind people. Soon there is a spate of arson cases around the city, with a club and multiple other locations burning down. When a teenager inexplicably gets the power to shoot fire from his hands and holds his school hostage, policeman Moreau and his new, straight edge, academy valedictorian partner Cécile begin to suspect that the powers are being passed around.

We then get a glimpse of the operation, with a young boy seen selling glowing neon tubes to school children who inhale the contents and instantly get powers. Moreau, who in the past was the police liaison for superheroes, finds out that the powers acquired by the kids originate from a hero called Brasero, who is soon found dead from having had all his blood harvested. The two cops are eventually able to apprehend the boy selling the glowing tubes, who is part of a much bigger organization run by Naja, who is holding superheroes hostage and harvesting their powers.

Naja’s accomplices, who are mainly young boys to whom he has given superpowers, attack the precinct and free the captured Ismael. They end up blinding most of the police force in the encounter using powers harvested from Eclipso. Moreau, though unable to stop the attack, is able to save the life of his partner by stopping her from fatally falling off a ledge. We then realize that the policeman has superpowers which he has long kept hidden. Soon, we are given a glimpse of the extent of his powers when he manages to foil an attempt to kidnap him by Naja’s men. However, Moreau is injured in the process.

How I Became a Super Hero Ending: Is Moreau Alive?

Realizing that Naja is harvesting powers from Lily, the daughter of a powerful superhero, Cécile enlists the help of 2 of Moreau’s superhero friends from the olden days and attacks Naja’s lair. The villainous boss, along with his men, responds with their newly acquired powers of shooting blue lasers from their eyes. The superheroes, though a little rusty, are able to subdue most of them.

However, Naja, who has consumed multiple vials of the superpower serum and is exploding with deadly energy, kidnaps Lily and tries to escape. Thankfully, Moreau arrives just in time and, after a brief faceoff, is able to rescue Lily. As Naja tries to chase her, exploding with power, Moreau pins his arm and shoots up into the sky with him. Naja is seen bursting in the sky, and Moreau eventually reappears, injured and weak.

The next day, the news is full of stories about a new superhero who’s been dubbed “Titan.” Cécile, having been made the new superhero liaison of the police department, gives her superhero ex-police-partner a mask that she tells him he will need now. In the closing scene of the movie, Moreau puts on the mask and flies away. So it looks like Moreau is alive and well and has survived the ordeal of being near Naja when he exploded from consuming too many vials of superpower energy.

In fact, it seems that there is very little that can harm the superhero who has kept his powers hidden all these years. Earlier, during an attempt to kidnap him, Moreau is shot multiple times in the chest by Naja’s men. Though it makes him unconscious, we see the bullets being pushed out of his body and the wounds beginning to heal. Soon after, Moreau is once again completely fit and faces Naja in battle with no sign of weakness from his earlier injury. He similarly comes out of his battle with Naja badly injured but is seen to have completely recovered soon after, in the closing scene of the movie.

Who is Titan and What Are His Superpowers?

Right after the climactic showdown with Naja, the injured Moreau is teleported away by his friend Monte Carlo. The police forces who have arrived on the scene see the showdown from far away, but most are unable to recognize who the superhero battling the villain is. Though Moreau’s police chief Chairmont is onsite too and recognizes his deputy, he doesn’t disclose his identity. Therefore, the news stories of a strong new superhero called Titan that begin appearing soon after the incident refers to Moreau.

The unlikely superhero, as is usually the case, now has a double identity, confirming that Moreau is finally going to take up the mantle and accept his role as a superhuman savior. The few times that Moreau has displayed his powers, they have been devastatingly strong and have shocked even those who have superpowers themselves. The translucent energy that stems from his hands allows him to manipulate matter with great strength. We first see this when he stops Cécile from hitting the ground after falling off a ledge by suspending her.

Moreau, or Titan, can even exert an incredible amount of force, as we see him partially crushing a van with just one hand. To add to that, Moreau soon after also displays substantial healing powers as we watch bullets being automatically pushed out of his body, and that’s not all. Truly living up to the superhero name bestowed upon him by the public, Titan can also fly, making him essentially much more powerful than any of the other superheroes seen in the movie, who all seem to be limited to just one superpower.

Who is the Pack Royal?

The Pack Royal was an old group of superheroes that Moreau liaised with and who fought crime in and around Paris. Though there could be more members in it, the heroes we see in the Pack Royal are Monte Carlo, Callista, and Gigaman. It also looks like Gigaman was the leader of the group, as it seems to have disbanded soon after his death.

The Pack Royal was one of the few — if not the only — groups of people that knew about Moreau’s superpowers. In the film’s climax, we essentially see the Pack Royal reunite under Moreau, with Monte Carlo and Callista fighting crime side by side after many years. It is especially poignant that the trio unites to rescue Gigaman’s daughter Lily, which also plays into the briefly mentioned subplot of how Moreau feels guilty for Gigaman’s death.

Does Naja Have Superpowers?

The psychotic villain Naja, it is discovered, had the power to hypnotize and control people as a child. His parents, unable to handle a young boy with such powers, approached the superhero specialist Caghieri to help get rid of them. Though Caghieri succeeded, her procedure also resulted in the boy going insane and killing his parents. Therefore, Naja had hypnotic superpowers as a child but doesn’t anymore.

The top that he spins whenever someone tells him something he suspects to be a lie might represent the last vestiges of his childhood superpower. Though not explored in the film, it looks like he is channeling some form of mental power through the top, which is why he spins it on Ismael’s head when he claims to be telling the truth. The fact that Naja orders Ismael to be killed soon after means that he was able to read the unfortunate youngster’s mind. Of course, considering he is described as insane, there is a chance that Naja only plays with the top and arbitrarily decides whether he wants to kill someone or not.

The only superpowers that Naja visibly has are the ones he harvests from superheroes and consumes through the glowing tubes. However, possibly because he had superpowers as a child, he can ingest much larger quantities of the serum and have explosive powers that far surpass those of his underlings, who would perish if they tried to consume too much of the superpower giving substance.

Who is the Girl in the End Credits Scene?

The girl in the end credits scene is Gigaman’s daughter Lily, who has recently been rescued by Moreau. We see her sketching a superhero outfit, meaning she is most likely going to follow in her father’s footsteps. Though we don’t get to see Gigaman’s powers in detail, the powers harvested from his daughter include the ability to shoot devastating blue lasers from one’s eyes. Hence, this is most likely the power that Gigaman’s daughter also has. Now, what could her superhero name be?

Read More: Will There be a How I Became a Super Hero Sequel?