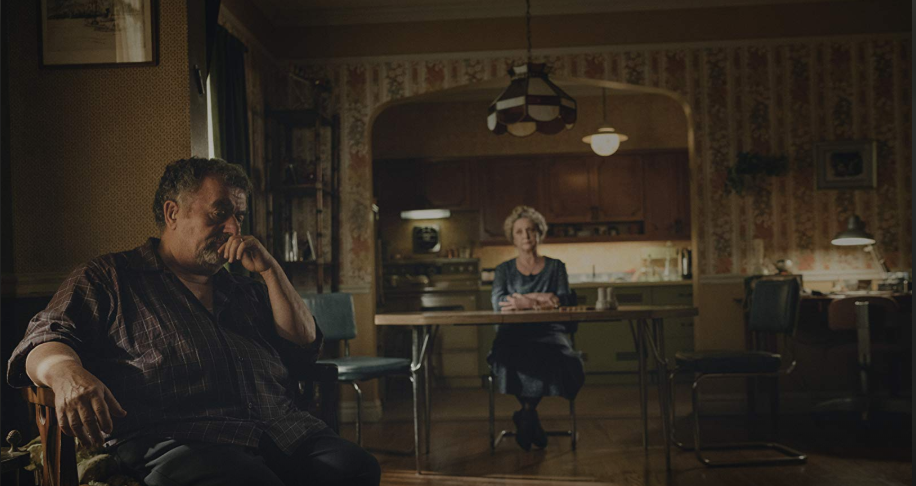 To begin with, the title of the seventh episode of ‘Hunters,’ ‘Shalom Motherf***er!’ promises something exciting and it delivers on that vow. As the first season inches towards an end, more resolutions can be expected and hopefully, a justified merger of the various themes floated in the previous episode.

The Amazon series stars Al Pacino and Logan Lerman and follows a group of Nazi hunters in 1977 USA. Jordan Peele serves as an executive producer and the series’ high production value has been one of the few consistent things about it.

The episode starts with Morris getting a call from Leisch asking her to look outside her door. He has dropped off an envelope. A note inside it mentions that the documents had been found at Meyer’s followed by the words “Tick Tock.”

In 1968, Ruth tells a young Jonah a story about two sisters: one of them named “Chava.” The story is basically a fantastical version of what happened to her at the concentration camps. In the present day, Joe, Jonah and Lonny travel to the Department of Veteran Affairs in Maryland. They want to find Timothy Randall’s file so that they can confirm whether he is “The Ghost.”

After a minor hiccup, Lonny manages to sneak into the records room and find Timothy Randall’s file. They find out that he has been living with a woman named Una. The three reach his/Una’s house and break into it when Una has left.

Morris’ superior, Harry Grimsby wants her to search Meyer’s house without a warrant. He convinces her to bring him in without a warrant and try to solicit a statement that could frame him. At Una’s house, Joe and Lonny find a dying old man lying unconscious on a bed with a ventilator and other medical equipment attached.  Jonah finds a music box elsewhere in the house.

The dying man is The Ghost and Eddie thinks that he was one of the test subjects at Edgewood (they were testing biological weapons). Una returns home with a kid and sees Jonah. Jonah points a gun at her, but she manages to flee.

Biff gets approached by a reporter who wants to inquire about his connection to Schindler Corp. She implies that he might have supported the bill supporting sanctions on South American companies for a personal reason. Biff tells the reporter to kill the story and knows that Juanita tipped her off.

Jonah tells the team that the music box he found at Una’s holds the key to decrypting the code that the team had found (in the form of a lullaby) from Holstedder’s house. The decryption results in co-ordinates which point to the targets of the planned attack.

Jonah confronts Meyer about his theory that he is his grandfather. Meyer tells him that he is right! Meyer is, in fact, Jonah’s grandfather. However, just when they are about to leave the house, Morris shows up with a team of FBI officers and a search warrant. She goes to the Ark and finds it burnt. She arrests Meyer for the murder of Heinz Richter despite not having enough proof.

The reporter that confronted Biff calls Schindler Corp. to inquire about the company’s connection to Biff. Biff reaches home to find his mother-in-law dead. Somebody attacks Biff, but he manages to defend himself and kills the attacker.

At Grand Central Station, Jonah spots Leich (he had seen him after Arthur’s murder). Lonny, Murray and Jonah follow him into a subway. But Leich manages to get out of the subway just before the doors close. Only Lonny manages to exit the train on time and follows Leich. Leich has chained a red bag to one of the seats on the subway.

Meyer is being interrogated. He tells Morris that he knows she doesn’t have enough proof. So, Morris switches off the recorder and aks him for his help. Meyer tells her about the planned attack, but Morris does not believe him. Joe finds Una’s car. Una points a gun at Joe from behind. However, Sister Harriet shoots Una from behind her and saves Joe’s life. Upon killing her, she says “Shalom motherf***er!”

Murray and Jonah find a bomb in the red bag left by Leich. Jonah uses his gun to scare the subway passengers into exiting the compartment that the bomb is in. Murray tries to defuse the bomb. However, he fails to do so and it explodes. Murray is dead…

Meanwhile, it is revealed that Una had already planted the bomb and it explodes in a power plant. The entire city suffers from a sudden blackout. The streets get out of control and people start to fight and behave erratically. In the dark, Leich stabs Lonny! Lonny is dead… The episode ends with an aerial shot of NYC blacking out. The last lights to go off are the Statue of Liberty ones.

When I mentioned, earlier in this article, that I expected a promising episode, I meant one which might be heavy on action. The assumption, thanks to the title, was that the episode would be one that would have me punch the air.

The seventh episode of ‘Hunters’ is definitely one of the better episodes of the series. Yet, the fact that two members of Meyer’s team would perish turns out to be extremely shocking. Murray’s death hits one in the guts because it portrayed to be quite an emotional affair: he hallucinates Aaron (his son who was killed as a boy at a concentration camp) in the subway before dying.

On the other hand, Lonny’s death feels disappointing because he was one of the few characters that provided comic relief.  The seventh episode is surely the most powerful and hard-hitting episode of ‘Hunters’ due to the deaths of two important characters. With a decent sixth episode, the series might just have a shot at salvaging itself after a largely forgettable first half.