I Love That for You Episode 1 Recap and Ending, Explained 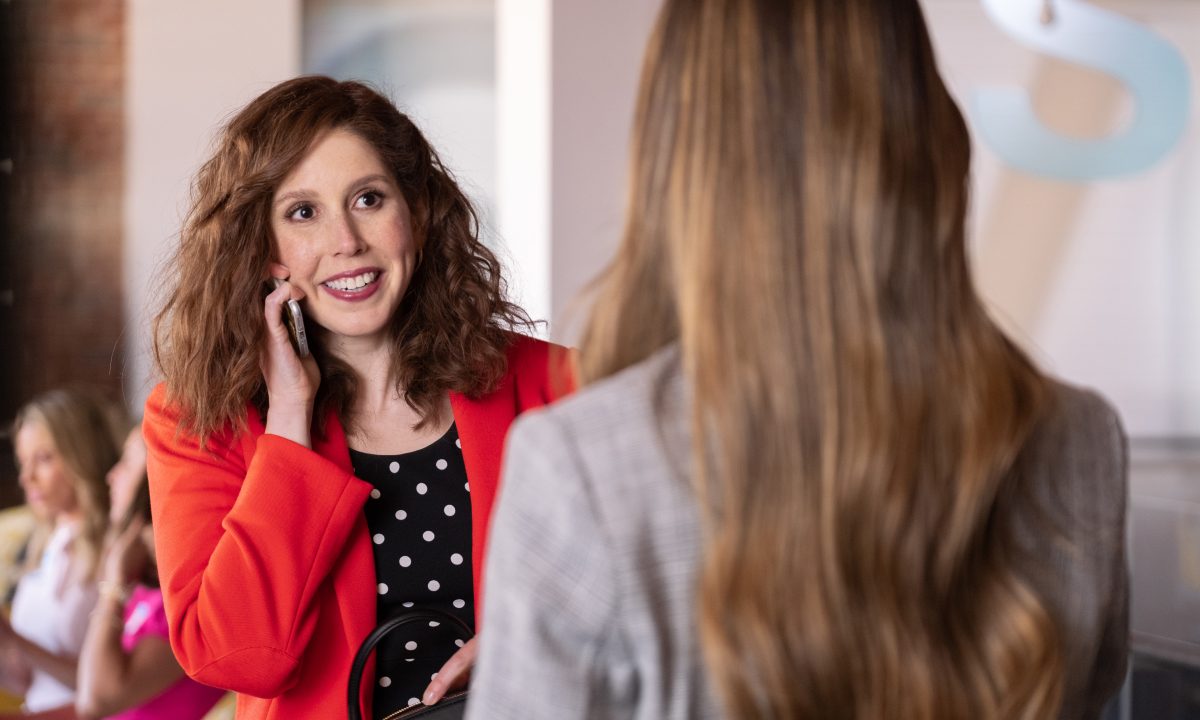 Created by Vanessa Bayer and Jeremy Beiler, ‘I Love That for You’ is a comedy TV series on Showtime. It follows Joanna, a childhood cancer survivor whose dream of becoming a TV presenter comes true when she gets hired at her favorite home shopping channel SVN. The first episode of the show is titled ‘GottaHaveIt’ and introduces the audience to the protagonist as she tries living a meaningful adult life, several years after recovering from cancer as a teenager.

Desperate to get away from her past, Joanna decides to audition as a home shopping host at SVN and gets selected. However, things go severely awry on her first time on-air and her job gets risked, leading her to do the unthinkable. Now, if you’re curious to find out what Joanna is up to as ‘I Love That for You’ episode 1 ends, and how she got there, why don’t we discuss it more? SPOILERS AHEAD.

I Love That for You Episode 1 Recap

‘GottaHaveIt’ commences with a teenage Joanna Gold, who is getting treated in the hospital for leukemia. During her stay, she garners a lot of sympathy for her situation, which she often uses to her benefit to get her demands fulfilled by adults. However, the one thing that makes her completely forget her miseries is watching star home shopping host Jackie Stilton on the SVN channel on TV. Secretly, the enamored little girl hopes to be a TV presenter herself and meet Jackie someday. 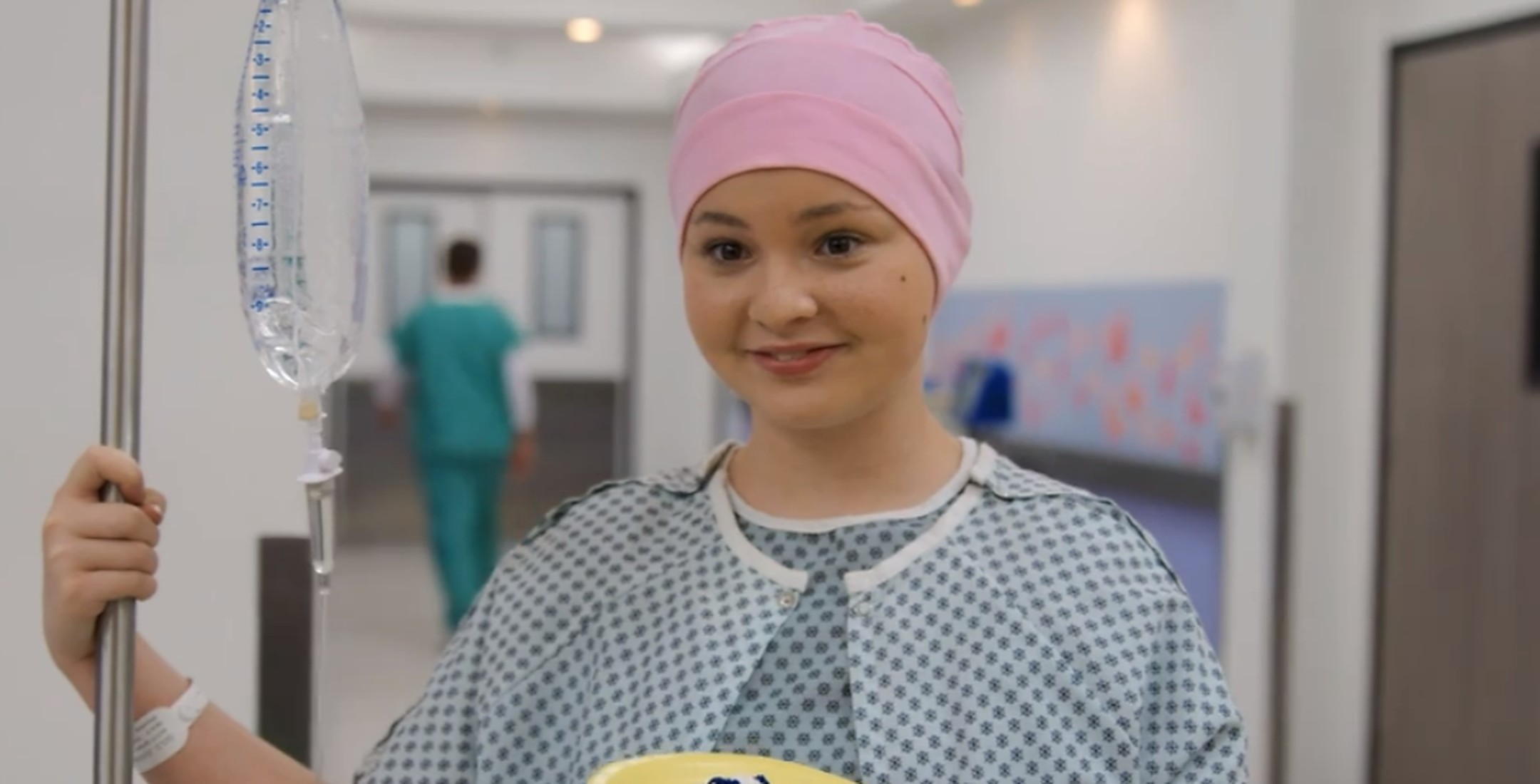 Years pass and Joanna recovers from leukemia successfully, but the stigma around her past situation follows her everywhere. She further gets frustrated when she sees her old classmates living their dreams whereas her love life goes down the drain due to her inexperience. Tired of being a lonely adult living with her overprotective parents, Joanna decides to take a leap of faith and audition for SVN, a dream she has had since her childhood.

Despite not having a talent agent, Joanna somehow manages to wriggle her way into the audition and performs awkwardly yet sincerely when she is asked to sell a pencil as her task. However, when she does not get a call back even after several days, she starts losing hope and gets into an argument with her parents. Luckily, SVN does select her eventually, and thus, Joanna leaves home to follow her true calling of being a respected on-air host.

On her first day, she gets acquainted with her some of her colleagues, namely Beth Ann, Darcy, Perry, and Beena. Unfortunately, Joanna fails to impress her strict boss Patricia and ends up behaving overexcited and nervous when she asks her to talk about her sellable quality. Dissatisfied with her performance, Patricia moves her to a less important time slot on the channel. Although a bit dejected, Joanna finds a new supporter in Jordan, a crew member at SVN, and sparks fly immediately between them. Not just that, she is over the moon when Patricia appoints her lifelong idol Jackie as her mentor.

Since Jackie is going through a tough divorce, she is a bit reluctant to train Joanna, but seeing the latter’s adulation for her, she gives in and befriends her. Gradually, their bond strengthens when Joanna talks about the bracelet she bought as a teenager after seeing Jackie sell it on SVN, and how she looks up to her as a source of inspiration. In return, Jackie shares her tips with Joanna such as which product variants to focus on during her segment, how to be more interactive in her presentation style, and ways to catch the viewers’ attention.

On the other hand, a jealous Beth Ann manipulates Joanna, but Perry guides her on how to create a relatability factor with the viewers, while Beena teaches her how to respond to audio prompts and not react in front of the camera to the instructions. After fumbling yet working hard through the rehearsals for a few days, Joanna finally feels prepared to go on-air for the first time. Furthermore, she successfully evades all questions that may force her to open up about her cancer experience to avoid sympathy from anyone.

I Love That for You Episode 1 Ending: Does Joanna Lose Her Job?

Just as Joanna is about to go on-air for her first segment, she is shocked to know that her product has been changed at the last minute. Regardless, she mentally prepares herself to demonstrate the new product — a range of organic pillow mists with distinct smells. Even though the product representative is unfriendly to her, she still manages a decent start to her segment and improvises her way through the script.

Things go well until the representative accidentally sprays the mist directly onto Joanna’s face, resulting in her giving a repulsed reaction to the camera. This leads to the product’s sales falling exponentially and, despite completing the rest of the segment professionally, she is heavily criticized for causing a heavy loss. The next day, a livid Patricia summons her into her office and Joanna finds out that Beth Ann was the one who got her product replaced to ruin her performance.

Despite Joanna’s repeated pleas as well as Jackie’s requests, Patricia refuses to listen and fires her. Unable to accept that she has just lost her dream job, Joanna makes one last desperate attempt and impulsively lies that her cancer has relapsed. Surprised at this information, Patricia immediately changes her mind and cancels the job termination after feeling bad for her.

Thus, Joanna gains the sympathy of all her colleagues, including Beth Ann, and ends up using her fake cancer as a USP to sell products on-screen. Though this goes against all her principles and firm resolve to not misuse her past problems for benefit, she is forced to employ her old tactics as a teenager yet again to have her way. With this, Joanna ends up just where she began and starts weaving a web of lies that may end up being problematic ahead.

Read More: Where is I Love That for You Filmed?