Inside Man Post Credits Scene: What Happened to Janice’s Husband?

Created by Steven Moffat, ‘Inside Man’ is a crime thriller series co-produced by BBC and Netflix. The series revolves around Jefferson Grieff, a death row prisoner who solves complex criminal cases to atone for his crimes. Meanwhile, village vicar Harry Watling finds himself pushing his morality to its limit while protecting his family. As the two stories intermingle, Janice Fife, an ordinary maths teacher, finds her life under threat. Therefore, Janice’s fate and presence in the post-credits scene will leave viewers scratching their heads. If you are looking for answers about the post-credits scene of ‘Inside Man,’ here is everything you need to know! SPOILERS AHEAD!

Inside Man Post Credits Scene: What Happened to Janice’s Husband? 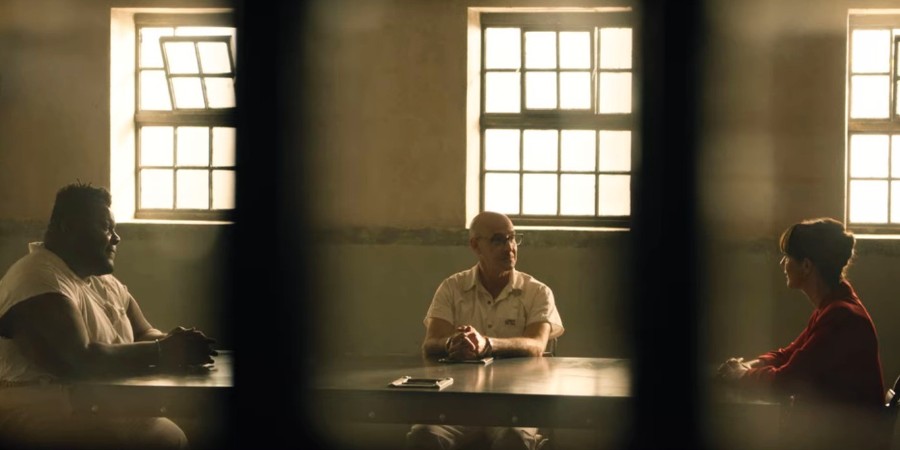 Ultimately, it seems like Janice is saved, and her storyline is resolved. However, a post-credits scene ushers her arc into a new direction and might also provide some answers about actions in the first season. In the post-credits scene, Grieff and his companion, Max, are summoned from their cells to tackle another case. They meet Janice, who is seeking their help in a peculiar case related to her husband. However, she does not specify what exactly she wants from Grieff.

The situation becomes even more baffling when Max reveals that, according to his research, Janice’s husband is not dead. He is still alive and presumably faked his own death for reasons unknown. Therefore, it seems like Janice wants Grieff’s help tracking down her husband. Another possibility is that Janice merely wants answers about her husband’s whereabouts and the reasons behind his disappearance. However, Janice’s request is shocking for the audience but not so much for Grieff.

Janice asks Grieff’s help in killing her husband. The revelation makes Greiff laugh, and he remarks that he is not surprised by Janice’s request as he knows every single person is capable of murder under the right circumstances. While it isn’t explicitly stated whether Grieff agrees to help Janice, it is implied that he accepts the case.

Grieff also reminds Janice that he only has a week before execution, confirming that he will be helping Janice. However, Greiff accepting the case is inconsistent with his motivations behind solving cases from behind bars in the first place. Greiff explained to Beth that he only accepts cases with moral worth. Greiff sees his eventual execution as his atonement and only takes cases that will not weigh on his consciousness at the time of his death.

Accepting cases without moral worth would negatively affect his path to atonement. Therefore, Grieff avoids such cases. However, one must imagine that aiding in a murder would not meet the criteria for Grieff to accept cases. Thus, Jancie’s request becomes all the more baffling. Nonetheless, the post-credits scene creates an exciting conflict for the second season. Moreover, we know virtually nothing about the disappearance of Janice’s husband and his true nature. It is likely that Grieff knows more about Janice’s husband than the viewers. Therefore, he clearly sees a justifiable reason to kill Janice’s husband. Hence, Grieff agrees to help Janice in her quest.