Is 12 Strong Based on a True Story?

’12 Strong’ is a 2018 war action drama movie that follows a group of American soldiers as they head deep into Afghanistan. Set in the aftermath of the 9/11 terror attacks, the soldiers’ mission is to embed themselves with a local warlord of the Northern Alliance of Afghanistan and help him defeat the Taliban. Of course, once the soldiers rendevous with the said warlord, they are forced to heavily improvise to his fighting style, which involves going into battle on horseback.

Directed by Nicolai Fuglsig, the film follows a breathless narrative in which the 12 titular soldiers face seemingly insurmountable odds. Surrounded by danger and unsure whether they can trust the warlord they are supposed to be helping, the film’s protagonists teeter on the edge of certain death. There are a lot of remarkable real-life war stories that get made into films. Let’s take a look at whether ’12 Strong’ is one of them.

’12 Strong’ is partially based on a true story. The film is adapted from Doug Stanton’s non-fiction book, ‘Horse Soldiers,’ and broadly follows the real-life story of twelve soldiers that went into Afghanistan soon after the 9/11 terror attacks to counter the Taliban. The book was transposed to the screen from a script by Ted Tally and Peter Craig, which Danish director Nicolai Fuglsig then directed.

Despite changing most American characters’ names, the film still broadly details many real-life events. However, servicemen that saw the film said that the story had been adapted for Hollywood and that events were embellished or presented out of order to raise the dramatic stakes. The film’s central character, Captain Mitch Nelson (Chris Hemsworth), is based on Mark Nutsch, who was the Special Forces team captain. After watching ’12 Strong,’ Nutsch noted that the movie is a fictional portrayal but has “threads of truth.”

As depicted in the film, Nutsch had been newly assigned to an administrative “desk” position in the Fifth Group headquarters. When he learned about the attacks, he went to Colonel and asked to be placed back in the field with his team. Another interesting aspect that the film gets right is that Nutsch had not had any real combat experience until then, much like the case with Hemsworth’s Nelson. 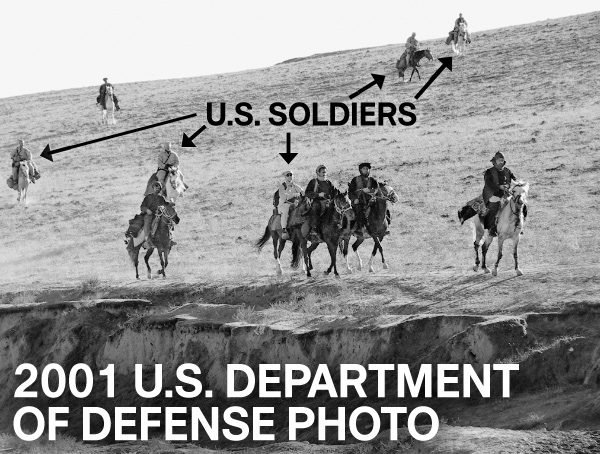 Though the “Horse Soldiers” (as Nutsch’s team was called because they often ended up using horses in the mission) were the first U.S. troops to reach Afghanistan after 9/11, the film does oversimplify how their mission came about. The real ODA 595 (U.S. Special Forces unit, Operational Detachment-Alpha 595) was one of three Special Forces teams sent into Afghanistan and initially tasked with rescuing downed American pilots.

Nevertheless, the mission then pivoted to getting the support of local ethnic leaders (including Afghan General Rashid Dostum, who is depicted in the film) against the Taliban and Al Qaeda. Interestingly, the ODA 595 was apparently supposed to be in Afghanistan barely three days after 9/11 but was delayed and left U.S. soil in October 2011. Finally, the part in the film about a small piece of the twin towers being taken to Afghanistan and buried there is loosely accurate because it happened, though it has been significantly embellished.

In real life, Colonel Max Bowers (depicted in the movie by Rob Riggle) carried over a metallic piece of the wreckage from the twin towers. According to the book that the film draws from, Bowers planned to give the piece of metal to Dostum to further cement his support in the fight against the Taliban. Months later, the Special Ops teams buried the piece of metal in Mazar-i-Sharif.

Thus, while ’12 Strong’ sticks broadly to the remarkable events surrounding the “Horse Soldiers” and their mission in Afghanistan immediately following the 2001 World Trade Center attacks, the film cannot be taken as complete fact. A good amount of artistic license means that the film is highly entertaining to watch but sacrifices some real-world details in the process. However, with all the weighty true events it draws from, ’12 Strong’ is at least partially based on a true story.