Is Alexandra Billings’ Inspector Ainsley Lowbeer Trans in The Peripheral? 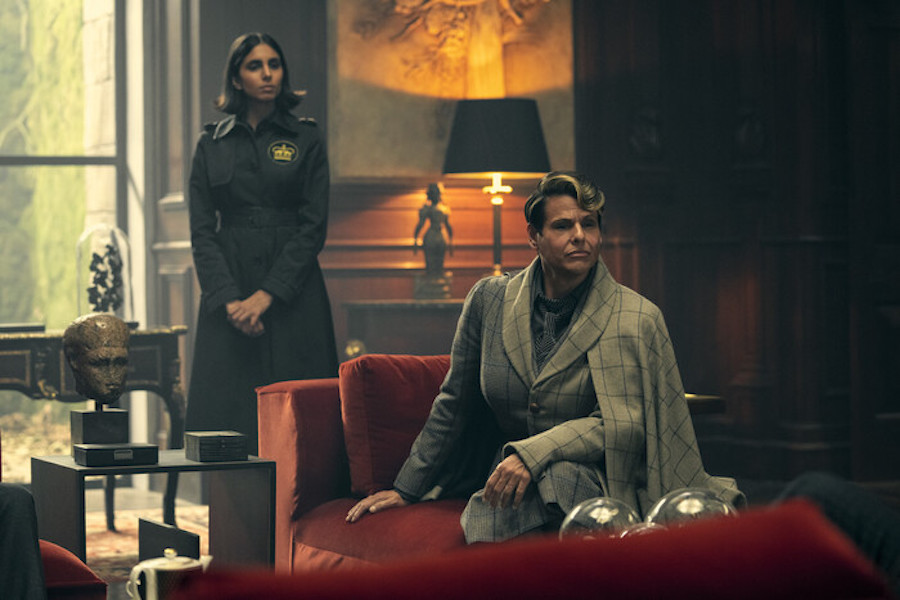 Prime Video’s ‘The Peripheral’ is a sci-fi drama that follows the story of Flynne, a girl who gets a chance to visit the future without ever leaving the past. What begins as a game turns into a very dangerous affair with hired assassins sent to kill Flynne and her family. Things get more complicated with every episode, as more and more people in the present get involved in the mess of the future. In the twenty-second century, the fight for power takes precedence, and bloodshed and violence become a common sight for Flynne. Someone is needed to put a stop to this, and that’s where Inspector Ainsley Lowbeer comes in. Who is she and what’s her sexuality? Here’s everything you need to know about her.

Yes, Inspector Ainsley Lowbeer is a trans character in ‘The Peripheral’. She is first introduced to the audience in the sixth episode of the first season. With Cherise Nuland and Lev Zubov at each other’s throats, the city of London sees a lot of bloodshed. This chaos eventually garners the attention of the Inspector who decides to pay a visit to Zubov.

While her title doesn’t give away much about her, it becomes very clear very quickly that the Inspector is much more powerful and resourceful than both Nuland and Zubov. The latter is visibly rattled by her sudden visit, which only goes to prove that not even the richest of klepts have any influence over her. Just as her power remains hidden behind a facade, according to the novel on which the show is based, the Inspector’s age is also a sort of an enigma. She doesn’t appear it, but she is supposed to be well over a hundred years old. The Inspector is also a trans woman, and the character is played by an equally formidable trans actress, Alexandra Billings.

Best known for her critically acclaimed role in Prime Video’s series, ‘Transparent’, Billings has set many benchmarks in her career. For her role in ‘Romy and Michele: In the Beginning’, she became the first openly trans actress to play a trans character on television. She also received praise for playing Madame Morrible in 2019’s ‘Wicked’ on Broadway. Billings has had a very interesting life and career, all of which she talks about in her book, ‘This Time for Me: A Memoir’. For all the ups and downs discussed in the book, the actress now enjoys a much more relaxing lifestyle. She is married to her longtime partner, Chrisanne Blankenship.

A forerunner for trans rights, among the many other causes that she supports, Billings has always been open about the treatment of trans actors and characters in Hollywood. With her fascinating and fearless role in ‘The Peripheral’, she wishes to start a conversation about queer identity. “I really hope that people have conversations about the queerness of the show, the fact that there’s a trans character in it. Even if it bothers you, even if it’s upsetting, triggering in some kind of way, any kind of conversation. I know how this is gonna sound, but even if it’s misinformation, in the center of that is the beginning of information, somewhere in the middle of that mess, you’ll be able to find some truth,” she said in an interview with THR.

With her scene-stealing performance as the Inspector, Billings does a brilliant job of presenting the character’s mysterious persona, where one doesn’t know whether to be scared of her or to revere her or both. The Inspector is certainly the most potent character in the novel, and Billings translates that to the screen with a charm and candor mixed with intimidation as only she can.