Is Ash Dead or Alive in No Exit? How Does Lars Die?

‘No Exit’ on Hulu follows a recovering drug addict named Darby, who finds herself stranded at a highway rest stop with four strangers during a blizzard. Things take an ominous turn when she realizes that a young girl is being held hostage in a van parked outside, leading Darby to concur that one of the people in the shelter is a kidnapper.

Of course, our heroine has no idea just how bad things are going to get. As the narrative proceeds, twist after ominous twist makes the situation increasingly deadly. What starts as a kidnapping becomes a violent rampage, leading to a truly bloody climax. The two young men, Ash and Lars, play a significant role in the ensuing chaos and pay a hefty price for their troubles. Here’s how things turn out for them at the end of ‘No Exit.’ SPOILERS AHEAD.

Is Ash Dead or Alive in No Exit?

Ash is revealed to be Lars’ accomplice soon after Darby confides in the former that there is a kidnapping underway. When our heroine realizes that the person she has recruited to help save Jay is actually the young girl’s kidnapper, Darby is left with no choice but to turn to Ed and his wife Sandi for help.

As the film’s climax unfolds, the violence steadily escalates. Ash is the only one with a gun, and unlike lesser villains, he isn’t afraid to use it. Meanwhile, Lars is armed with a high-powered nail gun set to shoot deadly nails like bullets. The two kidnappers use their weapons to subdue Darby and the couple, and for a while, it looks like they might succeed. However, things turn around when Darby manages to escape, and, with the police on the way, the kidnappers begin to panic.

On more than one occasion, it looks like Darby has bested Ash and the latter looks defeated. However, through a mix of cunning and luck, the criminal keeps slipping away. Finally, the protagonist finds herself pinned by Ash with a gun pointed at her head. Just as the latter is about to pull the trigger, Darby notices a knife within reach and jams it into Ash’s neck. The scene stretches on as Ash bleeds to death, sitting astride our heroine in one of the film’s more gruesome deaths. Ultimately, Ash dies from the fatal stab wound to his neck.

How Does Lars Die?

As messy as his accomplice’s death is, Lars has surreal and relatively bloodless death. In fact, the timid, slightly “weird” kidnapper is killed at the hand of his own partner and with the very same weapon that he (Lars) uses for much of the film. 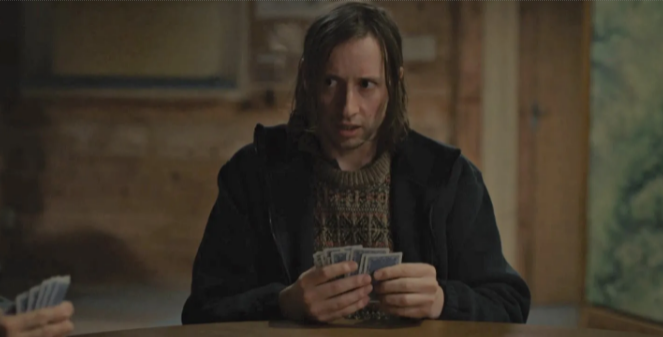 When Ash briefly leaves the room to look for the car keys, Darby escapes and manages to wrestle the gun out of Lars’ hands. When Ash returns, he is stunned to find his partner being held hostage at gunpoint. Thinking quickly, Ash picks up the nail gun and points it at Darby, who ducks behind Lars for cover.

In the midst of the standoff, young Jay charges at Ash, making him accidentally fire the nail gun. The nail hits Lars squarely in the center of his forehead, and after mumbling a few words, the unfortunate kidnapper stumbles away and falls over dead. For those who missed the gruesome detail, Lars’ face-forward fall actually results in the nail, initially sticking out from his forehead, getting “hammered” into his skull, killing him instantly.

Read More: Is No Exit Based on a True Story?