Is Brandy Ricky Gervais’ Dog? Does the Dog Die in After Life Season 3? 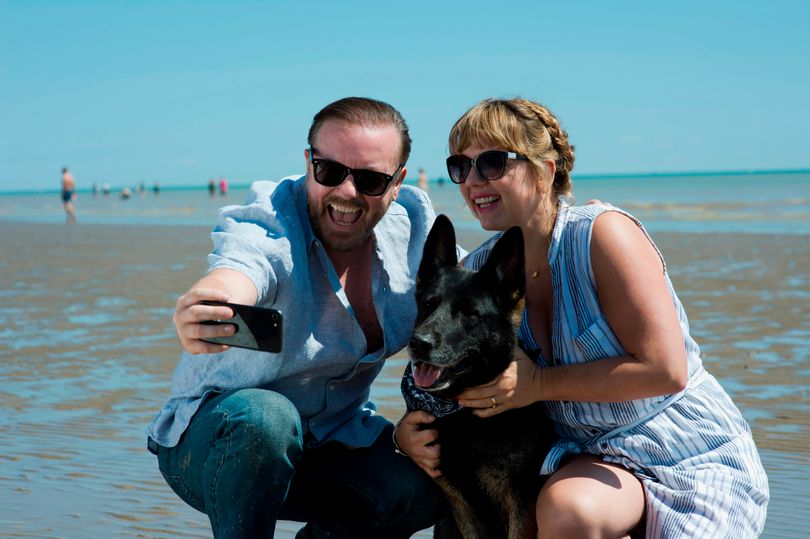 ‘After Life’ is a poignant tale about grief, acceptance, and healing. Created by and starring Ricky Gervais, it follows Tony Johnson (Gervais), the head of feature stories at a local newspaper, whose life is turned upside down after his wife’s death. He contemplates suicide but ultimately doesn’t go through with it because of his dog, Brandy. His sense of responsibility to the animal becomes his only anchor to the world.

‘After Life’ doesn’t really celebrate grief, as some might argue, but underscores the fleetingness of life and the immeasurable value of each moment we spend on Earth. Tony’s close bond with Brandy has led many to believe that she belongs to Gervais in real life. Here is everything you need to know about it. SPOILERS AHEAD.

No, Brandy is not Ricky Gervais’ dog. In real life, she is a female German Shepherd named Anti. Although Gervais isn’t her human, they do seem to share a close bond. Anti appears regularly on Gervais’ social media, and not just when the latter is promoting the show. In all of these posts, the two of them seem to be genuinely enjoying each other’s company. During an interview with Graham Norton in 2020, Gervais recalled saying goodbyes to his co-stars and revealed that he nearly cried when he did that to Anti. Gervais and his domestic partner Jane Fallon actually had a Siamese cat Ollie that passed away in March 2020. They later adopted Pickle, a cat they fostered.

Does the Dog Die in After Life Season 3?

Due to the show’s somber themes, many fans of ‘After Life’ were afraid that Brandy would die in the third and final season. This prompted Gervais to take to social media and clarify that the dog wouldn’t die in season 3. The renowned actor-writer-creator has kept his promise for the most part. Brandy’s death doesn’t get explicitly shown in the series. However, the final scene depicts the inevitability of death. In that scene, Tony walks through a park with Brandy. A version of Joni Mitchell’s “Both Sides Now” plays in the background. Tony’s late wife, Lisa (Kerry Godliman), appears and briefly walks beside them before vanishing. Then Brandy disappears, and at last, so does Tony.

Thanks for making #AfterLife the most watched British comedy in the world. Season 3 is the best yet. Also, the dog does not die. Good Girl! pic.twitter.com/JRumO2MD8o

While this ending might seem depressing to some fans, it perfectly fits the show’s overall themes. Brandy doesn’t die immediately, but her death will happen, just as Tony’s will at some point in the future. As it has always done, ‘After Life’ enunciates the importance of truly living with its ending. As Gervais said in an interview, “It’s (the ending) basically saying – this isn’t a spoiler, I promise – It’s basically saying, we all die, but not today. That’s all it’s sort of saying, it’s that at the moment, it’s good. It’s fine.”Death is an inevitable part of life, but that doesn’t mean that we should let it affect how we view the world around us and the enjoyment we garner from it. In that regard, we have much to learn from our canine companions.

Read More: Where Was After Life Season 3 Filmed?