Is Dan Brown’s The Lost Symbol a True Story? Is It a Sequel to Da Vinci Code? 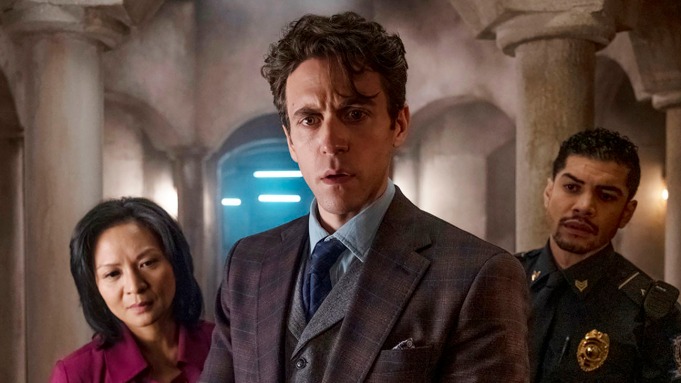 Developed by Dan Dworkin and Jay Beattie, ‘The Lost Symbol’ is an action-adventure mystery drama series that revolves around Robert Langdon (Ashley Zukerman), a brilliant young academic who discovers that his mentor, Peter Solomon (Eddie Izzard), has been abducted by a dangerous man named Mal’akh (Beau Knapp). This prompts Robert to join forces with the CIA to find his mentor. ‘The Lost Symbol’ is a fascinating show that explores concepts like American history, Noetic Science, secret societies, and Freemasonry. If you are wondering whether ‘The Lost Symbol’ is inspired by real-life events, this is what you need to know.

Is Dan Brown’s The Lost Symbol Based on a True Story?

No, ‘The Lost Symbol’ is not based on a true story. It’s the TV adaptation of the 2009 namesake book by popular author Dan Brown. It is the third entry in the author’s ‘Robert Langdon’ series, preceded by ‘Angels & Demons’ and ‘The Da Vinci Code.’ Initially, ‘The Lost Symbol’ was supposed to be adapted in the cinematic form for Tom Hanks and Ron Howard’s film series, but the producers later decided to make a movie out of ‘Inferno,’ the fourth book in the series, instead. ‘The Lost Symbol’ was created as a prequel to the Robert Langdon film series. This is why Robert is much younger than he is either in the books or films. This change also affected certain relationship dynamics among the characters. In the book, Katherine Solomon is Peter’s sister, but she is his daughter in the show.

In an interview, Brian Grazer, a producer of the first two films, admitted that he and his collaborators couldn’t transform the third book into a concise script for a film. They realized that the protagonist had so much depth that a film was not enough to explore the character. On the other hand, if the project is to be developed as a show, it gives enough opportunity to depict Langdon’s journey as a whole.

Dworkin and Beattie subsequently became associated with the 10-hour-long Peacock series. To adequately adapt ‘The Lost Symbol’ for the small screen, the story needed to be completely deconstructed and then rebuilt from the ground up. The show creators had to come up with new characters and new backstories and elements to fill those 10 hours with comprehensive storytelling. According to Beattie, finding the balance between Brown’s original work and the new aspects of the script became a key issue.

Arguably, the trickiest job during pre-production was to find someone who could convince the audience that he was the younger version of a character Tom Hanks portrays. Fortunately for the producers, they found Zukerman. Grazer stated that Zukerman’s portrayal of Langdon is the “pure embodiment” of how the character is depicted in Brown’s source material. As for Zukerman himself, he mentioned that he felt honored to be selected to portray such a character, adding that he hoped that he would be able to depict the young Langdon in such a way that the audience wouldn’t have any issue imagining him turning into Hank’s Langdon from the movies.

As with most of Brown’s other works, ‘The Lost Symbol’ has certain elements that make people genuinely wonder if there is any truth to what they read in the book. In ‘The Lost Symbol,’ Brown writes about Freemasonry, which are real-life fraternal organizations that have existed for centuries. In a 2009 interview, Brown stated that the Freemasons were worried that he would focus on their macabre side in his depiction of them. Brown depicts the Freemasons as organizations that exist beyond the religious divide.

While speaking about the passages about the Noetic science in the book, Brown admitted that he struggled with the concept. “Noetic science really is the reason this book took me so long to write,” he stated. “I’ve said before I’m a skeptic. And I hear about these experiments that are being done that categorically and scientifically prove that the human mind has power over matter.” Evidently, ‘The Lost Symbol’ is not based on a true story, but it’s perfectly understandable if someone thinks it is.

Read More: Where Is Dan Brown’s The Lost Symbol Filmed?