‘Devotion’ is a war drama film directed by J. D. Dillard and written by Jake Crane and Jonathan Stewart. It stars Jonathan Majors as Jesse Brown and Glen Powell as Tom Hudner, two naval officers serving during the Korean war. The film follows Brown and Hudner as they suffer the tragedy of war while upholding their friendship and commitment to their nation.

The narrative references several historical events as it is set against the backdrop of the Korean War. Hence, viewers must be wondering if the movie is based on real events. We also got curious about the same and did a little research into the matter. Here is everything we discovered about the inspiration behind ‘Devotion.

Is Devotion a True Story?

Yes, ‘Devotion’ is based on a true story. The movie is an adaptation of the 2015 book ‘Devotion: An Epic Story of Heroism, Friendship, and Sacrifice’ by Adam Makos. It was adapted for the screen by writers Jake Crane and Jonathan Stewart. The book tells the story of elite fighter pilots Jesse Brown and Tom Hudner. The duo became the US Navy’s most celebrated pilots during the Korean War. While the film sheds light on Brown’s early life, most of the narrative occurs in the 1950s. 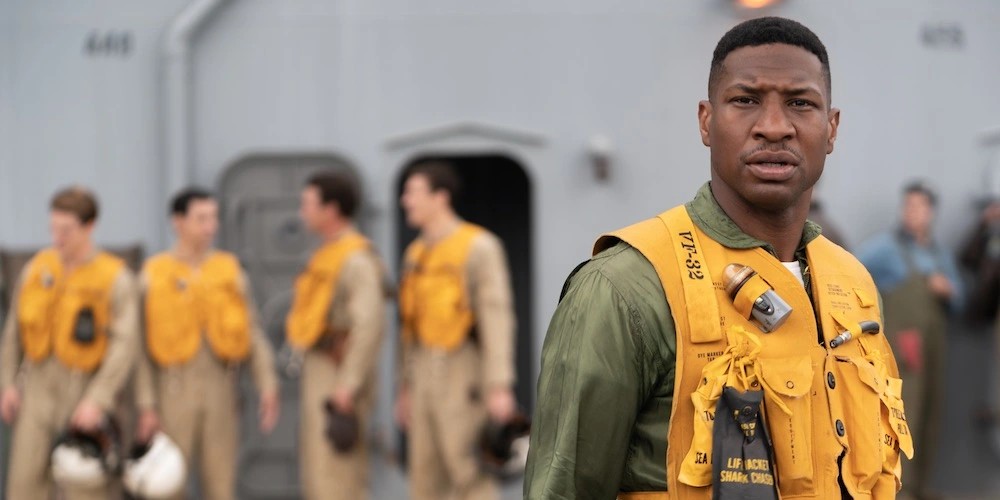 Jesse LeRoy Brown was born in Hattiesburg, Mississippi, on October 13, 1926. He is the son of Julia and John Brown and has five siblings. Brown enrolled in the Navy’s V-5 Aviation Cadet Training Program and began the course in March 1947. He started his Naval Flight Officer training at Glenview Naval Air Station in Glenview, Illinois.

Brown spent the next few years undergoing the various stages of his training at Glenview, Ottumwa Naval Air Station, and Pensacola Naval Air Station. However, he faced several incidents of racism during this period. Brown eventually completed his training and was commissioned as an ensign on April 26, 1949, becoming the first black aviator in the US Navy.

On the other hand, Thomas Jerome Hudner Jr. was born on August 31, 1924, in Fall River, Massachusetts. He is the eldest of businessmen Thomas Hudner Sr’s four children. Hudner attended the prestigious Phillips Academy in Andover, Massachusetts. Following his graduation, Hudner joined the US Navy but was initially uninterested in aviation. Later, he enrolled in the Naval Air Station Pensacola and became a fighter pilot, eventually rising to the rank of captain.

Jesse Brown and Tom Hudner served together during the Korean War. Brown and Hudner were part of a six-aircraft flight supporting the US Marine Corps fighting Chinese forces on the ground level in the historic Battle of Chosin Reservoir. Brown had already flown 20 combat missions during the Korean War in an F4U-4 Corsair. However, on December 4, 1950, Brown’s aircraft came under fire and crashed on a mountaintop ear Somong-ni, 15 miles behind the enemy lines.

Brown’s wingman, Hudner, crash-landed his won craft to help save Brown’s life. However, his efforts were in vain, as Brown succumbed to his injuries and passed away. He was merely 24 years of age and received several accolades from the US government for his services during the Korean War. On the other hand, Hudner was awarded the Medal of Honor for trying to save Brown’s life. He continued serving in the US Navy until his retirement in 1973. Hudner passed away on November 13, 2017, aged 93.

The extraordinary rise of Jesse Brown to become the first black aviator in the US Navy and his tragic demise during the Korean War, as well as Hudner’s valiant efforts to save his wingman, form the crux of the movie’s story. The film is mostly a faithful adaptation of the events described in Makos’ book with little fictional modifications. The movie accurately depicts actual events, such as Brown’s admission into the cavitation program and secret marriage to his wife, Daisy Pearl Nix.

In an interview, director J. D. Dillard opened up about his desire to make a film on Brown and Hudner’s lives. Dillard explained that his father was also an African-American naval aviator, and he was acquainted with Brown’s story before he took the project. Furthermore, Dillard’s father served as an advisor in the film to ensure that the movie accurately depicts Brown’s experiences on the screen. The director also explained that although he tried to tackle certain modern and relevant themes through the story, his focus was to showcase the incredible life of Jesse Brown.

Ultimately, ‘Devotion’ is based on the riveting true story of Jesse LeRoy Brown, a revered figure in the US Navy. Furthermore, the film also highlights Brown’s bond with Thomas Jerome Hudner Jr and the latter’s extraordinary dedication to saving his friend’s life. Additionally, the movie also comments on themes such as racism and nationalism in a modern context despite its period setting without doing injustice to the larger-than-life persona of its real-life inspired characters.