Is Dreamer Based on a True Story?

John Gatins’ directorial debut ‘Dreamer’ is a sports drama movie that centers upon Ben Crane, a racehorse trainer, who loses his job as one of his horses, Soñador, breaks a leg in the middle of a race. As for severance, Ben is given the injured horse, which is not much of a consolation in Kentucky. After this tragedy, Ben and his family, comprising his wife Lily, father Pop, and a 10-year-old daughter Cale, somehow live on what’s left of a rambling house farm. Soon, an unemployed Ben comes up with a plan to breed the injured Soñador and sell her colt to the highest bidder.

However, Cale has another idea for the horse. She wants Soñador to race again. Sounds like a naive fantasy of a little girl, doesn’t it? Well, what seems like an unrealistic and silly prospect turns out to be an inspirational story of an ailing racehorse becoming the hero of the tracks! Packed with compelling performances by Kurt Russell, Dakota Fanning, Elisabeth Shue, and Kris Kristofferson, the movie might make you wonder whether ‘Dreamer’ is based on true events or not. So, let’s find out if the story has anything to do with reality!

Is Dreamer Based on a True Story?

Yes, ‘Dreamer’ is based on a true story. The comeback story of an injured Thoroughbred racehorse named Mariah’s Storm served as an inspiration for the film; thus, giving birth to the character of Soñador in the movie. Gatins, a passionate screenplay writer, knew the fact that heart and drive mean more than simply winning races at times. This made him want to write a screenplay about a horse who fought against all the odds through sheer grit. So, he began researching racehorses who had bounced back from injuries that were considered career-ending ones. 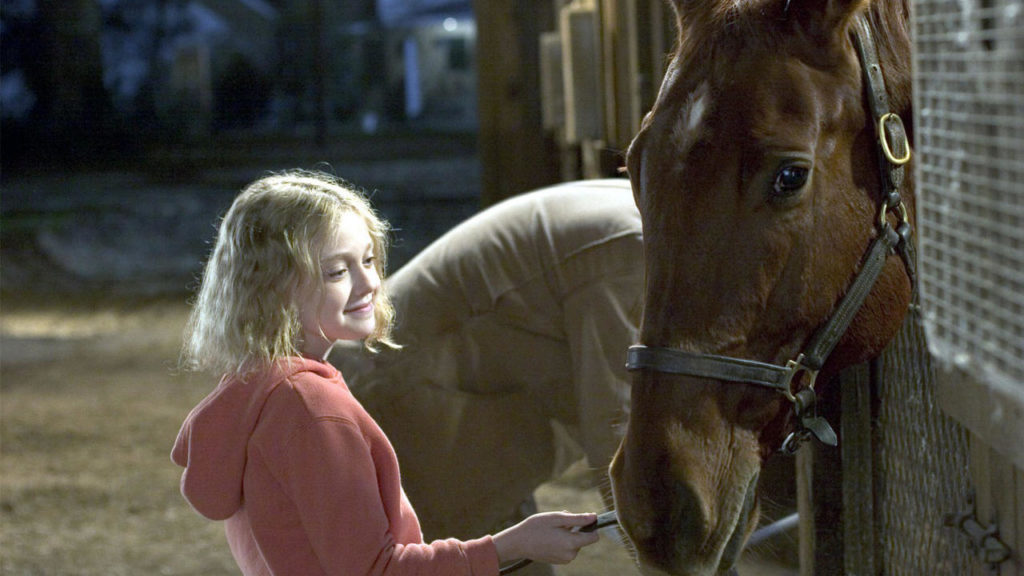 Sooner than later, Gatins stumbled onto the story of such a remarkable mare named Mariah’s Storm, a promising racehorse in the early 1990s, so much so that she went on to become one of the favorites to win the 1995 Breeders’ Cup. Unfortunately, while prepping up to qualify for the prestigious championship in 1993, Mariah’s Storm got injured in the Alcibiades Stakes. Since a cannon bone fracture is considered a career-ending injury, there was little to no chance for her to return to the tracks ever again.

However, the knockback didn’t allow Mariah’s trainers and owners to lose faith in her. Skilled veterinarians did the best they could to heal the injury. Eventually, the cannon bone fracture got healed, but the real question still remained — Will Mariah’s Storm be able to race again? This question was soon answered when she made a comeback to win the Arlington Heights Oaks in August 1994. Soon after that, she proved her doubters wrong again by winning the Arlington Matron Handicap in September 1995. Before her injury, she had also won the Arlington Washington Lassie in September 1993.

After claiming these victories, Mariah’s Storm became the only horse ever to win all three stakes races for her age class at Arlington. Thus, she received the honor of having a race named in her honor — Mariah’s Storm Stakes. However, her achievements don’t stop there; she also won the 1995 Turfway Breeders’ Cup by beating the champion, Serena’s Song. With ‘Dreamer,’ Gatins alludes to some of the familiar materials, such as the loyalty and love between a horse and a child. This dates back to some of the classic films, including ‘National Velvet’ (1944) and ‘The Black Stallion’ (1979).

The 2005 film received great reception and love from the audience as everybody loves to root for an underdog. Apart from aiming to tell a true and inspiring event on the big screen, ‘Dreamer’ is also aimed at the newer generation of audience who had not heard of such films. Besides the injury and triumphant recovery, there is hardly any resemblance between the actual life and career of Mariah’s Storm and that of the horse Soñador in the movie. Having said that, it was Mariah’s Storm’s courage and determination that became the main source of inspiration for Gatins’ script.