Is God’s Favorite Idiot Based on a True Story?

Netflix’s ‘God’s Favorite Idiot’ is a comedy TV series created by Ben Falcone. It follows a man named Clark who lives a regular life with no dangers or adventure. He is in love with his colleague, Amily, but is too scared to ask her out. Things change for him when he is struck by lightning one day. At first, he doesn’t think much about this weird incident, but then strange things start happening to him. Most importantly, he starts to glow, which leads him to become an Internet sensation. While some people jump in his support, there are others who call him a blasphemer. In the meantime, the war between heaven and hell worsens and the apocalypse slowly inches closer.

The show uses a relevant premise and gives it a touch of comedy to discuss deep questions, especially pertaining to religion. It also gives a realistic portrayal of the struggles of a man who has been chosen by God. This makes us wonder how much of the story is rooted in reality? Here’s what you should know about it.

Is God’s Favourite Idiot Based on Real Events? 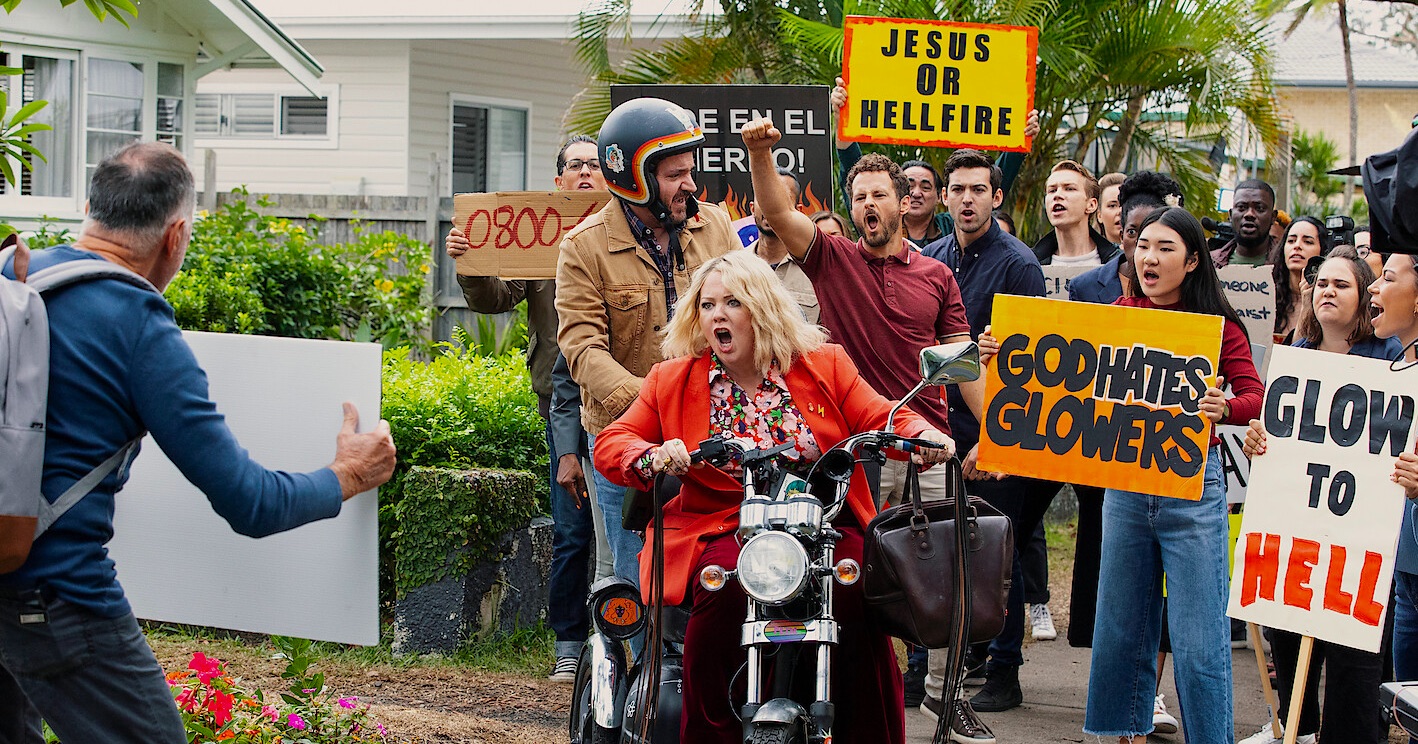 No, ‘God’s Favourite Idiot’ is not based on true events. It is an original story written by Ben Falcone, who also stars as the lead character Clark Thompson. While the show aired on Netflix in 2022, the story had been conceived by Falcone a long while back. “It’s an idea that’s been with me for a while. I wrote a book about it when I was in my mid-20s,” said Falcone on TODAY.

“I’ve been fascinated with theology for a long time. Melissa is fascinated by the idea of if somebody was a messenger of God, how would they be received, and how would the messenger themselves react? Especially, if it’s someone who’s not the quickest on the uptake. So that was where the idea was born,” he told THR. For a long time, they didn’t pay attention to the idea. But about two to three years ago, Melissa McCarthy advised Falcone to pick it up again, but also to make the guy human and give him a job at an IT office. The seed germinated in his mind, and the duo started working on the script.

When it came to sketching the main character, Falcone wanted someone low-key, who wasn’t flashy or very heroic. He found the inspiration within himself and based parts of Clark on his own personality. “I don’t like to think of myself as forgettable but Clark is forgettable. And to have the kind of low-key guy get touched by god was interesting. I’m definitely the most low-key member of my family,” he said. McCarthy agreed with him and thought that it basically came down to the inherent goodness of a person, not their strength or flashy personality. She didn’t think it would be someone’s perfect looks or perfect voice or the general popularity that would lead them to be chosen by God. It would be someone who would be trustworthy, someone that can be depended on to do the right thing, someone like Clark.

While religion offers a great premise for a comedy, Falcone and McCarthy knew that it was also the easiest way to offend people. So, they took extra precautions to make sure that the show is respectful of all religions and that no one’s religious sentiments would be hurt by it. Above all, they wanted to make sure that the core purpose of the show is fulfilled, that people turn to it in difficult times and spend a few hours feeling good, reflecting on the warm message of the show. So, while ‘God’s Favourite Idiot’ might not be rooted in reality, the intentions behind it are grounded and real, with characters that the audience will see themselves in.