Despite being a post-apocalyptic survival show, ‘Fear The Walking Dead’ has developed a reputation of killing off its main characters in shocking and tragic moments that make for some truly entertaining and emotional drama. As a result, the fans are always on their toes and sweating over the fates of their favorite characters. One such fan-favorite character on the show is John Dorie. Introduced in the show’s fourth season, the lovable cop, John Dorie, has been one of the more optimistic characters on an extremely dark show.

Fans quickly fell in love with Garret Dillahunt’s portrayal of the character, and the actor has been a series regular since season 4. Therefore, it came as a surprise to many as the show’s sixth season makes use of the character in a limited capacity. In the eighth episode of season 6, John isn’t his usual bright self and contemplates suicide, making fans concerned about his fate. Here’s what happened to John Dorie and what it means for Garret Dillahunt’s time on the show. SPOILERS AHEAD.

Last seen in the sixth episode of season 6, John makes his much-awaited return in the eighth episode titled ‘The Door.’ After splitting from June and leaving Virginia’s settlement, John has been living in a cabin, which is the same one where he spent his summers as a kid. As often is the case with characters with strong moral codes in the world of ‘The Walking Dead‘ franchise, John has grown delusional and struggles to cope with his actions. He tries to take his life by suicide but is distracted by the cabin’s door, which doesn’t close. He sets out to find a replacement and runs into Morgan and Dakota. 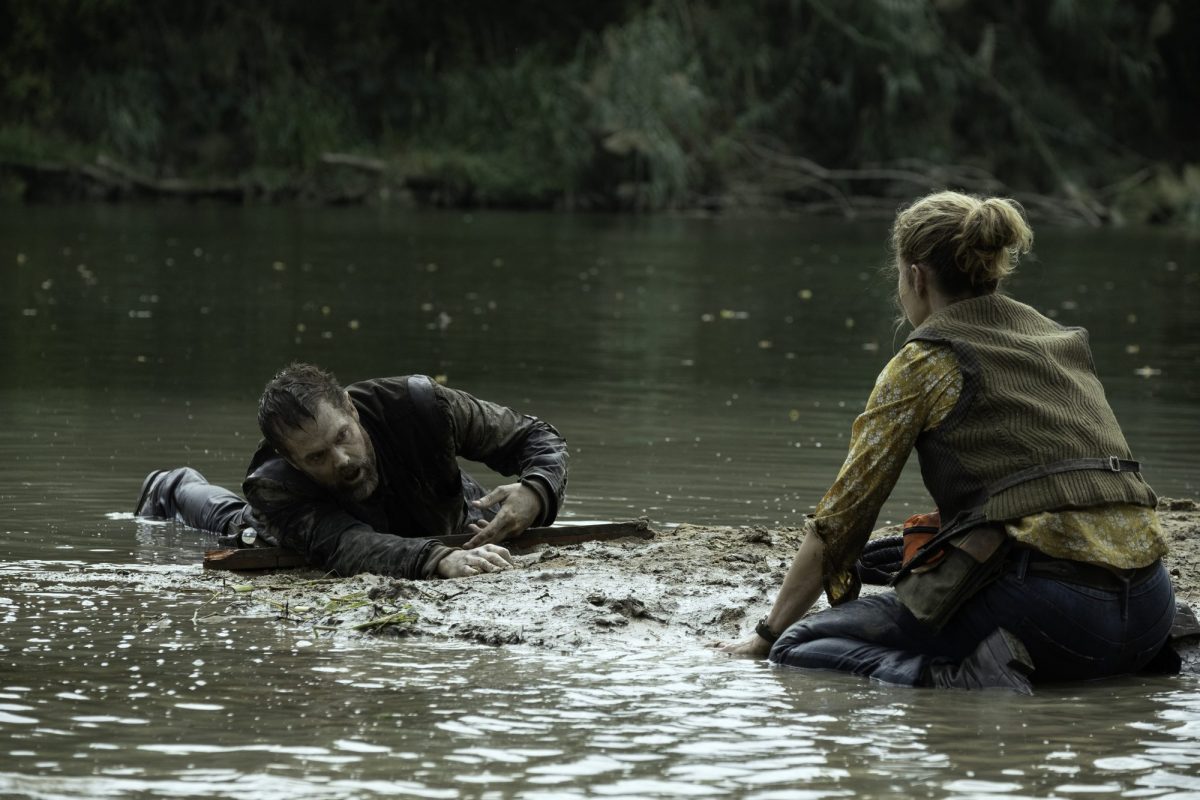 After helping them get past a horde of walkers on the bridge, John learns a dark secret, and the knowledge proves to be fatal for him. As it turns out, it was Dakota who murdered Ranger Cameron at the Lawton settlement. John, who has been struggling to find a motive to live, finds one in caring for Dakota and decides to look past her heinous crime. However, Dakota shoots him, and he falls into the river. The man finds some will to live after all and decides it’s not too late for him. Rising to the surface, John’s body is seen flowing downstream on one of the replacement doors.

John ends up washing out on the shore outside his cabin, where he is found by June. The latter quickly realizes that John has turned into a walker and is forced to kill him. As fans might remember, John first meets June when she washed onto the shore outside the same cabin. They later become lovers and share a contentious moment atop the same bridge that John is shot on, making his death even more tragic and somewhat poetic. It’s a Shakespearian moment but a particularly grim one that underlines the fact that morality often becomes an obstruction in survival. As it stands, John Dorie has met his demise on ‘Fear The Walking Dead.’

In an interview with Entertainment Weekly, Garret Dillahunt opened up about the tragic death of his character on the show. The actor said that the conversations about killing off his character had taken place since the fifth season. There was a lot of discussion about how the character would exit the show between season 5 and season 6. “They came up with this great idea — great, and tragic, and wonderful, and believable in this world for how to get him off the show. And, at the same time, propel the story forward,” added Dillahunt.

The 56-year-old actor has been a regular face on primetime television, appearing in shows such as ‘Raising Hope,’ ‘The Gifted,’ and ‘Brooklyn Nine-Nine,’ among others. Dillahunt expressed interest in working on other projects and confirmed his departure from the show in the same interview. The decision to kill off his character was not only because of the actor’s desire to pursue other roles but also for storytelling reasons. He said, “I loved my time on this show and will always cherish it. I get a little antsy after a while, and I’m not a kid anymore, and I have some things I wanted to do. And I’m just fortunate it worked out.”

John’s death will have major implications for the other characters as Morgan and Virginia’s settlements prepare for a head-on collision. John Dorie was not only a dear friend to Morgan but also a ray of hope that guided others and pulled them out of dark places. The tragedy of his ending is that none of those characters managed to come through to pull him out of his dark phase. For now, the sun has set on Dorie and Dillahunt’s time on ‘Fear The Walking Dead.’