Is Skater Girl Based on a True Story?

Netflix’s ‘Skater Girl’ is an Indian-American collaborative film that follows the story of a young village girl from India who discovers skateboarding. Torn between the expectations of a conservative society and her growing passion for the sport, Prerna’s journey from seeing her first skateboard to competing in national skateboarding competitions is a nuanced social commentary.

The coming of age story is grounded and portrays the harsh social realities that youngsters, especially girls, have to overcome in developing countries. The phenomenon of sports uniting communities is also a strong theme in the film, something which is seen to happen in the real world as well. Prerna’s story feels like one of those inspiring tales that are made into movies to immortalize them. So, is her story true? Let’s take a look at whether ‘Skater Girl’ is based on a true story or not.

Is Skater Girl Based on a True Story?

No, ‘Skater Girl’ is not based on a true story. The grounded realities and authentic characters in the film are a result of extensive ground-level research and the use of many real skateboarders from rural parts of India in filming the movie. The film, co-written by Manjari and Vinati Makijany and directed by the former, is a project that explores women’s empowerment through social change brought about by skateboarding culture. Manjari, who has worked alongside the likes of Christopher Nolan on ‘Dunkirk,’ came back to India for her topical film inspired by how various international non-profit organizations like Skateistan were transforming lives. 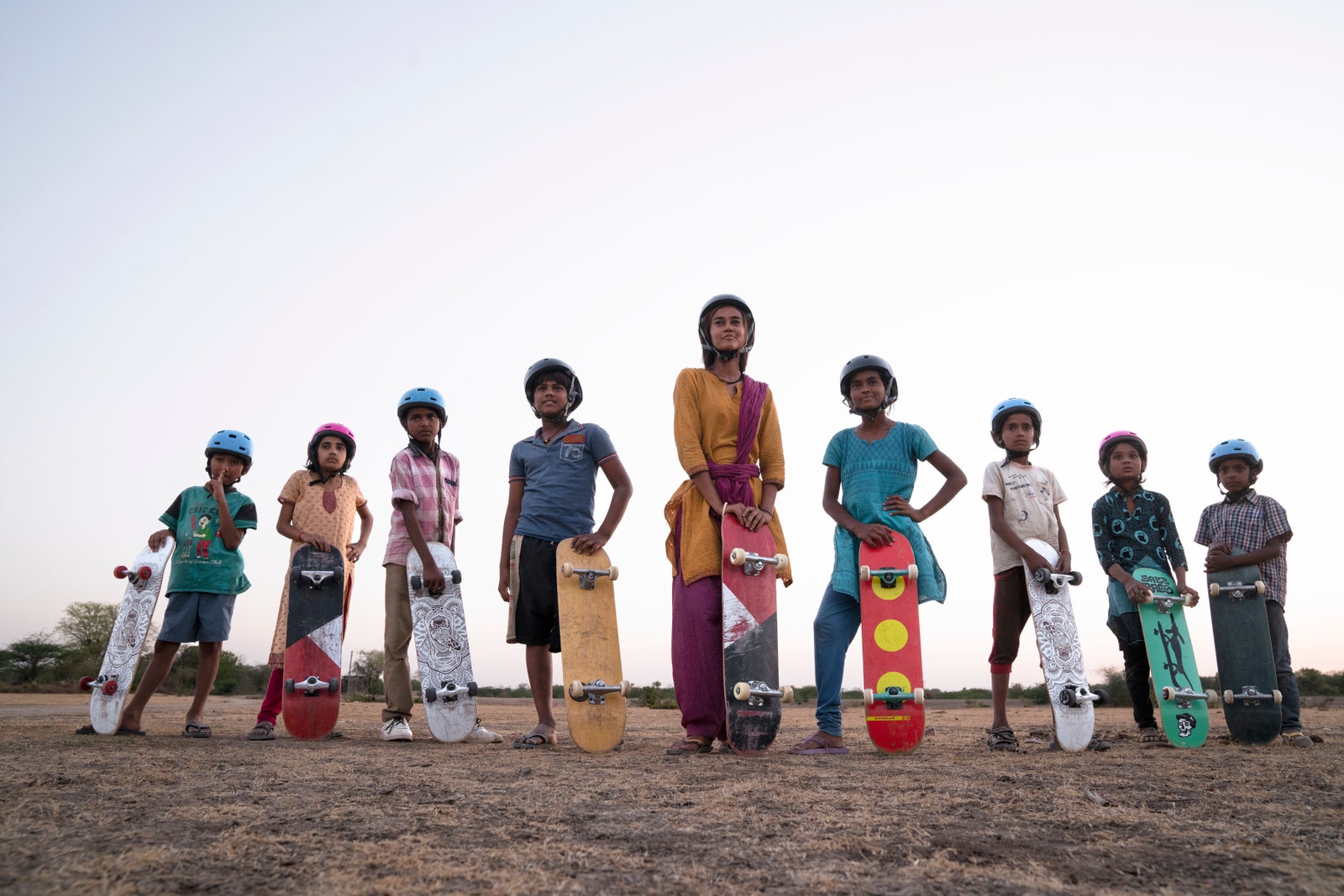 Most famously initiated in Afghanistan, Skateistan (and other collectives) inspired societal change by promoting skateboarding as an agent of social change in many developing countries. Manjari’s interest in the subject was piqued after learning of young skateboarders in a village in Madhya Pradesh, India, who were positively influenced by the movement. Having already been introduced to skateboarding culture during her time in LA but now being privy to a completely different, revolutionary aspect of the activity, she began researching for the script that would eventually become ‘Skater Girl’ in the mid to late 2010s.

As is the case with many developing countries, India too has a large youth population under the age of 25, and some may argue that they don’t have enough prospects. As it originally did in Afghanistan, skateboarding has created a community that transcends social and cultural barriers and gives the youth a feeling of freedom that they embrace. The sport has also provided many youngsters from rural parts of the country with a platform where they can grow and compete.

The filmmakers, keeping in mind the social impact of their subject matter, ensured that the film did more than just make audiences aware of the skateboarding movement. The skatepark built in the film is in Khempur village near Udaipur in Rajasthan and was subsequently donated. The film’s producers hoped that the 14,500 square foot facility, which was designed by the skateboard specialist groups 100 Ramps and HolyStoked Collective, would facilitate professional skateboard training. Skateboarding becoming an Olympic sport in 2021 makes the movie — and its push to promote youth involvement in the sport — all the more timely.

In the making of ‘Skater Girl,’ Vinati detailed how they attempted to include as many local skateboarders as possible. Some 3,000 young people were involved in the film, which was a result of scouting trips through the villages of Madhya Pradesh and Rajasthan, as well as the urban hubs of Mumbai and New Delhi. Atita Verghese, one of the most famous Indian skateboarders who became the first Indian to join the Vans athletic team of skateboarders, also has a cameo in the film.

The film also features two girls from a fishing community in Kerala who, after attending a skate club where Varghese taught, went on to win national gold medals in the sport. Though the film, with its young female protagonist who beats the odds to follow her passion for skateboarding, could very well be inspired by just Verghese’s story, it is not. It is inspired, instead, by all the youngsters whose lives are being positively influenced through skateboarding.