Is Teen Mom Real or Scripted? 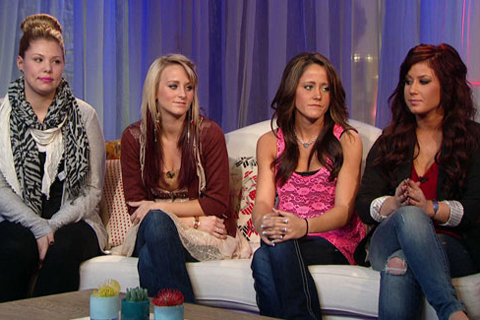 ‘Teen Mom,’ as the title suggests, follows women who became mothers early in their lives. We see them trying to adjust with the massive responsibility, finishing school, finding a job, trying to move out, enrolling for college – all the while managing their children. The individuals juggle many balls at the same time, and as a result, they are bound to fail or lose their tempers occasionally. While many viewers are drawn to the series due to its premise, some flock to it for the drama. One question that everybody seems to be asking is whether ‘Teen Mom’ is real or scripted. We get to the bottom of the matter, here.

Is Teen Mom Scripted or Real?

‘Teen Mom’ has faced a lot of flak from cast members about inaccurate portrayals, so one can safely say that the show’s in a soup when it comes to accuracy. Bristol Palin pointed out the inaccuracies and false narratives, saying that the MTV series does not portray her work ethic or the struggle of handling three kids on her own. There’s almost no focus on how she’s had to start over or build a career humbly. You can check out her lengthy Instagram post, which ends with a clear warning to fans that they shouldn’t believe everything on television.

It’s not the first time that fingers have been pointed at ‘Teen Mom.’ Mackenzie Standifer called out the series after she stopped filming. Her husband, Ryan Edwards, also quit. Standifer noted that the MTV series uses real-life issues as a way to make money. Though the network didn’t want to show Ryan as a recovering addict, they tried to portray the baby being brought up by Ryan’s parents.

Farrah Abraham also chipped in about moving on from the show, saying that she couldn’t stand being villainized in front of her children. She noted that she liked doing scripted work, and the show was getting a little scripted in its own right, which is why she decided to make a transition to films.

These allegations are just the tip of the iceberg. There’s more going on under the surface, as proven by a person formerly involved with the series. The ex-cameraman for the series noted that it is not scripted insofar as there isn’t a narrative. However, the storyline is exceedingly influenced by the director. In reality shows, we have come to expect a certain degree of interference from the directors and producers who wish to highlight dramatic moments for higher television ratings. ‘Teen Mom’ is also concerned with the drama, rather than showing the genuine struggles of the single moms.

Even what we do see on television is heavily edited and often taken out of context. Chelsea Houska, a cast-member, has spoken out in shock, noting that some conversations which occurred in entirely different contexts, were lifted and portrayed in an unrecognizable manner. She took to Twitter to express her dissatisfaction, as you can see from the posts below.

Just a little something that irked me about the show tonight.Theres a part where I say "I feel like it's taking away from Cole's experience"

And that was taken out of context from a different convo and added in that scene for some reason. 🤔

If you’re still a believer and are looking for some form of comfort or confirmation, you can turn to Jenelle Evans’ statements about ‘Teen Mom.’ When asked in an Instagram Q&A session, whether the show’s scripted, Evans noted that it is not, and later, a fan asked a more pointed question about whether producers instruct them on what to say. Jenelle replied that cast members usually talk about recent things that have happened, which viewers have missed. Javi Marroquin, Kailyn’s ex-husband, noted that though some parts may be cut out, the participants control what they say on the show.

Thus, there are varying accounts regarding the veracity of ‘Teen Mom.’ No matter which way we cut it, some embellishments cannot be ignored. However, fans tend to look past such inaccuracies and enjoy the drama showcased.

Read More: Where is Kailyn Lowry From Teen Mom 2?