‘The Old Way’ is a western film helmed by Brett Donowho about a brutal gunslinger turned family man named Colton Briggs (Nicolas Cage) who’s distanced himself from his gruesome past. However, old rivalries come afloat, and his wife Ruth (Kerry Knuppe) is murdered. He returns home with Brooke (Ryan Kiera Armstrong), his daughter, and finds Ruth’s body. Colton is deeply agitated by the loss and sets out to avenge his wife’s death as his daughter accompanies him.

A heartwarming father-daughter bond unfolds, where we learn about their odd dynamics as they plot revenge. The rawness of their emotions and the depth of their character make you wonder if they are based on real-life personas. If such questions arose in your mind after watching ‘The Old Way,’ then here’s everything you need to know.

Is The Old Way a True Story?

No, ‘The Old Way’ is not based on a true story. Driven by a script penned by Carl W. Lucas, the Nicolas Cage-led western film is an eclectic work of fiction. In an interview with Screenrant, Brett Donowho spoke about his upbringing and elaborated on how the Western is not just a movie genre for him but an experience. He said, “I grew up on a ranch for a lot of my life… I had the cowboy uncle going to rodeos, and me and the Boy Scouts would go out and ride horseback growing up.” He also grew up watching “Rawhide and Gunsmoke and, of course, the John Wayne and Charles Bronson movies.” 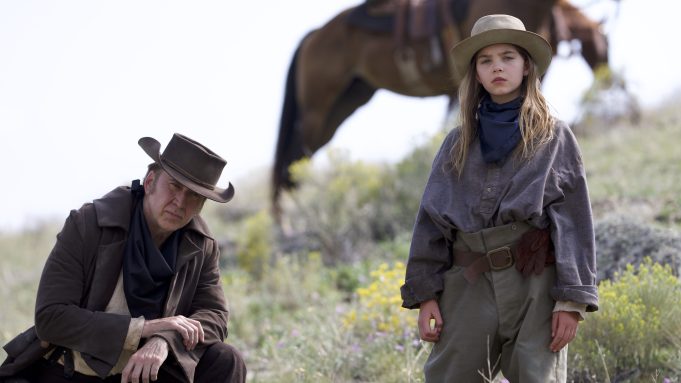 The director was moved by the script, not just because it had a western theme, but also due to the father and daughter element, which he found relatable as he is a father of three beautiful daughters. “I immediately gravitated to not just the Western ideology and the mythos of what this revenge tale is, but obviously, the characters of a father and a daughter, which I can relate to profoundly,” Brett said. He also highlighted the interval arc of the movie, where the two characters open up to each other and let their emotions flow through.

Interestingly, Brett explained how he “read these characters as being on the spectrum, and I’m a person that, I made Music Within, which is another great movie, in my opinion, that talks about the disabled, and the passing of the ADA, so when I read this, I was like, ‘Wow, we’ve never seen these characters, like a father and a daughter who are emotionless, that are outsiders, that are misunderstood, not only by other people, but by each other.'” He also discussed how it’s one of the few western movies where the audience uncovers layers of the cold-heartless-hero trope and gets an insight into his backstory.

Brett described the time he read the script for the first time and was mesmerized by the storyline. More than Colton Briggs, he felt that casting someone as Brooke would be a lot more difficult because her character was quite complex. Brett recalled the time he watched Ryan’s audition tape and teared up; it made him emotional, and he chose her out of thousands of auditionees. In an interview with Collider, Nicolas Cage described the scene wherein he teaches his daughter how to cry, which was a brilliant display of their emotional range, considering how cold the duo is at the beginning of the movie.

The actor added, “I don’t know what the condition is. It’s never explained in the movie, and they both have a propensity towards violence. But the idea that this family of Colton and Brooke go through a tragedy, go on the road together, and learn to love, that was compelling to me.” He then went on to describe how Ryan had to purposely act bad for this particular scene, and it was quite hilarious to him, and it made him laugh out loud.

Having said that, Nic did acknowledge the fine acting talent and conviction of the young actor. Moreover, out of all the movies that Nicholas Cage has done across several genres, this is his first time performing in a western film. Taking everything into account, we infer that ‘The Old Way’ is not a true story, but like many other movies, it is an amalgamation of experiences that were put together perfectly to create a sense of relatability.