Being the heaviest patient in the history of the show, a 46-year-old James King featured in season 5 of TLC’s hit reality series. Belonging to Kentucky, James came on ‘My 600-lb Life’ in 2017. He started his weight-loss journey with Dr. Now but their efforts were all in vain. Being one of the tragic stories of the show, James weighed 735 lbs at the start and stood at 788.6 lbs by the end of the show. He didn’t lose any weight at all; instead, he gained about 50 pounds more. His journey was supposed to be filmed for one whole year, but due to his non-compliance, he was dismissed from the show in the eleventh month.

James was raised by his father alone as his alcoholic mother left the family when he was young. She passed away soon after and James never got the chance to reconnect with her. James had gone through an emotionally difficult childhood. He had also lost his home to a fire and his family had to start their lives from scratch. Since then, James had been battling his depression by drowning himself in food. His food addiction only got worse with age as the challenges of life got tougher and more stressful.

When he became bedridden because of his obesity and was unable to take care of his large family, he realized the dire consequences of his overeating. In those days, his father suffered a stroke, which he eventually recovered from, but James felt guilty for not being able to be there for him. That pushed him to take action. His father, too, motivated him to visit Dr. Now.

The series showed that James’ wife, Lisa, had to take care of him all day, and she took on the responsibility of looking after the family all alone. His daughter, too, had to quit school to help her mother. Experiencing great financial struggles, James’ father took a second mortgage on his house and financed James transport to Houston’s hospital so that he could get appropriate treatment from Dr. Now.

When Dr. Now started his consultations with James, he put him on a strict 800 calorie/day diet. It was tough for James to follow through as his addiction caused him a lot of distress. He did try to bring his weight down to 600 lbs so that he’d get approved for gastric bypass surgery. But when Dr. Now conducted a follow-up checkup, he found that James had gained over 150 pounds. Dr. Now called Adult Protective Services on his wife as he suspected her of being an ‘enabler’. What he didn’t realize was that James was manipulating and emotionally blackmailing Lisa so that she would sneak him some extra food. He ordered his family around and they had no choice but to give in to his food demands.

Dr. Now felt that his family should leave him alone in the hospital as they were a hindrance to his weight-loss journey. But that didn’t go down well with James. Dr. Now dismissed him from the show and refused to perform surgery as it seemed to be risky at his current weight. He informed James that he needed to bring his weight down, and if he became successful in doing so, he may come back for the surgery.

James and his family left the program with a list of diet plans, exercise regimes, and a recommended physical therapist. He later appeared on the show’s spin-off ‘My 600-lb Life: Where Are They Now?’ that checked on a patient’s progress. But, his follow-up episode blew everyone’s mind. James was now tipping the scales at 840 lbs! Even though he was a fan-favorite on the show because of his touching life story, James was suspected of not taking the process seriously.

Where is James King Now?

After the show, James King didn’t make any progress. He suffered from various health issues like sepsis, liver cirrhosis, kidney failure, high blood pressure, leg infections, anemia, and cellulitis. Reports suggest that he had been in-and-out of hospitals for the last two years and he had a brush with death in late 2018. When he came back home from his long stay in the ICU, he started a GoFundMe page asking the public for donations to finance his groceries and rent. His goal was to earn about $8,000 but he only received $200.

Unfortunately, James King passed away on April 3, 2020, in Nashville, at the age of 49. Although the cause of death has not been revealed to the public, sources confirmed that he had not been keeping well for a long time. His obituary has been published on a funeral home’s official website. It read, ‘James was born in Elmhurst, Illinois on June 2, 1970. He was a loving husband, son, brother, daddy and ‘poppy’ to his grandchildren. James loved sports, especially wrestling, hockey and baseball. James’ favorite team to cheer for was the Chicago Cubs. His other hobbies included fishing and communicating to friends across the country on his CB Radio under the handle ‘Cracker Jack’.’ He is survived by his father, wife, five children, and nineteen grandchildren. He is the seventh patient to expire on the show’s eight-year-long run.

James King was inactive on social media. His Facebook account was outdated. His wife, Lisa, had posted a status on her Facebook account some time back that hinted on the fact the wasn’t doing well health-wise. It said, ‘Praying for you baby. I love you so much!’

Her step-daughter, too, took to Facebook and updated her profile picture with him. She also wrote, ‘Just feels so empty. I miss you so much.’ 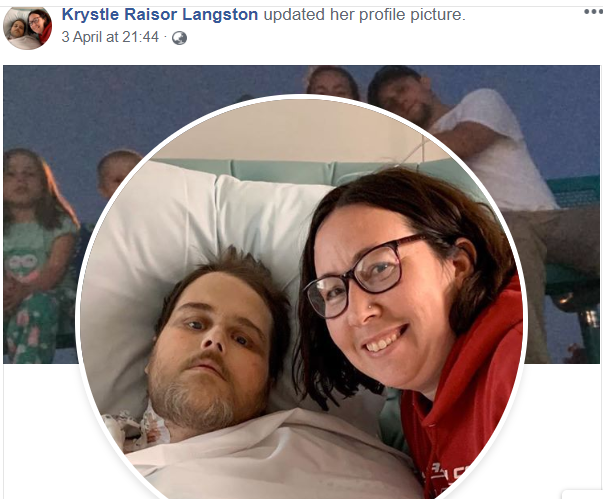 Fans are deeply saddened. They are praying for his family and posting their condolences online. The team at TLC also took to Twitter and expressed their remorse on his sad demise.

TLC was deeply saddened by the loss of James King, who shared his weight-loss journey on My 600lb Life. Our thoughts and prayers are with his family at this difficult time.

Read More: Where is Maja Radanovic from ‘My 600-lb Life’ Now?