Are YouTubers Jenna Marble and Julien Solomita Still Together? 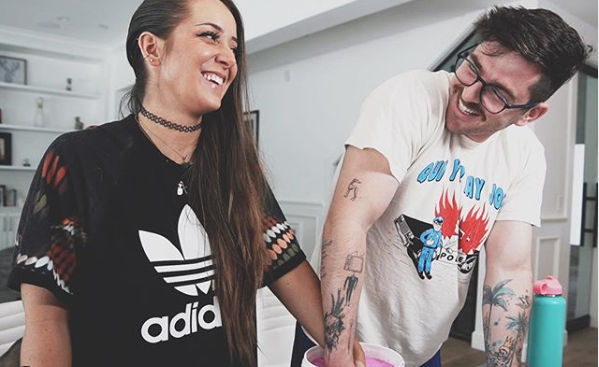 Jenna Mourey, better known as Jenna Marbles, is one of the most well-known and loved YouTubers out there. Back in 2010, after working a string of regular jobs, she decided to post a video titled ‘How to Trick People Into Thinking You’re Good Looking.’ It amassed 5.5 million views that week, as it the case with most of her content. This single video eventually led to her becoming one of the biggest names in the industry. For several years, she was also the most subscribed-to female YouTuber.

There is no denying that she is a YouTube legend. In fact once, when she and her boyfriend Julien were in the mall, a kid with a vlog channel (with 183 subscribers) came up to meet them. She herself was vlogging and captured this interaction. Within a couple of days, his small channel has gained more than 90,000 subscribers! This incident really shows us how loyal and lovely her fan base is, and how influential she can be as a content creator. If you’re itching to know more about her relationship status, then keep on reading.

Jenna and Julien: Their Journey So Far

Jenna, 33, and Julien, 28, initially met at a bar where he worked. She was still dating her previous boyfriend, Max Weisz, at that point in time. He was also hired to be her personal bodyguard for a trip to Ireland, and from that point on, a friendship blossomed between the two. He was also the man behind the camera for many of her vlogs. Though she did not reveal this to her subscribers for a few months, Jenna and Julien got together in 2013.

Both of them are successful YouTubers in their own right. Jenna has 20.3 million subscribers, and Julien has 2.48 million subscribers. Over the past couple of years, they have become a fan-favorite couple owing to their genuine chemistry and love and respect for each other. In 2014, the two set up joint YouTube channels as well, where they would upload things like podcasts and videos on various topics. They also uploaded the pranks that they often played on each other.

It is not easy to balance a professional relationship with your significant other, especially if you have the same roles, but they did it impeccably. Their followers could see their daily shenanigans on YouTube and Instagram, and many even felt that this couple was the definition of true love.

Are Jenna and Julien Still Together?

Yes! The couple is still going strong 7 years later. The pair, who are also vegans, have 4 dogs and live in California. In May 2018, the two also went forward and bought a beautiful home in Sherman Oaks together. In the reveal video titled ‘We Bought a House,’ they talk about how much effort, planning, and hard work went into the process. Jenna even said they’re not legally married but are bound together by the property’s deed. In fact, they are in no rush to get to the altar, especially considering the huge step they took together.

Earlier this year, Jenna made the decision to quit YouTube after some offensive content in her older videos came to light. She received a lot of backlash for videos she has posted way back in the day. People accused her of blackface, slut-shaming comments, and lyrics that were racist for the Asian community. In a tearful apology video, she said that she had made those videos private and that she did not wish to offend anyone with content that had not only aged poorly but also should have never existed in the first place.

jenna made a difficult decision this week. but it was the right one for her. for her mental health. and for (cont) https://t.co/6s5aDjVYvN

Her long-time boyfriend, Julien Solomita, has also addressed that while she has left the platform indefinitely, he too would take a small break so that he could take care of Jenna. They do not have any idea about the future of their joint ventures as of now.

Read More: Indian Matchmaking: Where Are They Now?