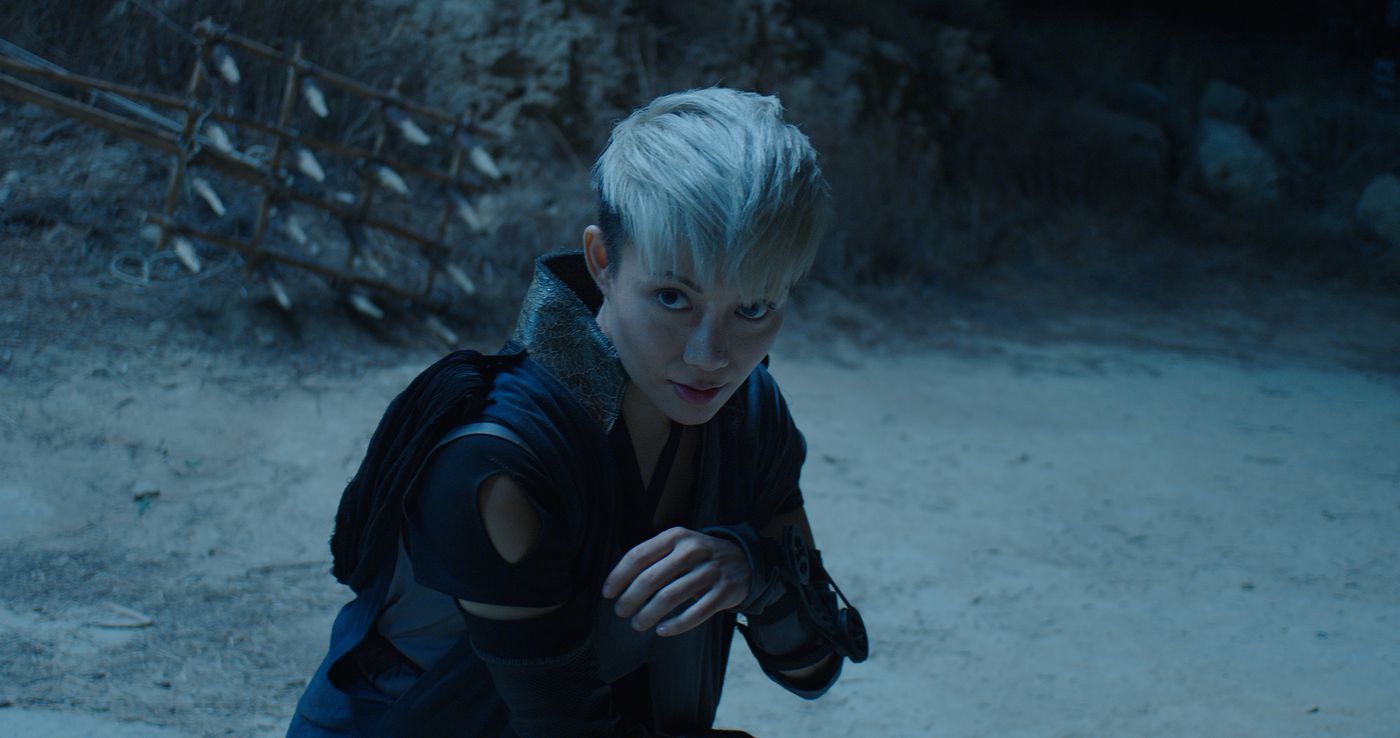 Directed by Dimitri Logothetis, ‘Jiu Jitsu’ is a mind-bending experience of a sci-fi thriller. Set in the mythical orient, the story includes an ethical alien straight from the set of ‘Power Rangers,’ a secret cult, a group from the U.S. army that is kicked around, and a hero’s quest for truth. Top it with Nicolas Cage as Wylie the Buddha, and it’s a recipe for, well, a spectacular mess.

After a number of fight sequences, the confused hero confronts the invisible threat, which reveals itself gradually. However, in a valorous battle with the ancient assailant, Wylie, the leader, dies, but we know that he is only one martyr in a line of people who were chosen to fight with the alien. But we’re getting ahead of ourselves. Let us break down the final moments of the film and see what happens in the end. SPOILERS AHEAD.

The story of ‘Jiu Jitsu’ opens with a person, Jake, running through the jungle, while stars (shurikens) are thrown at him from seemingly invisible enemies. We see him falling into the sea, and he wakes up in a rundown shack as he is rescued by Wylie and left to be tended to by two indigenous fisherfolks. His wound is stitched up, and he is taken to a military depot, where miscommunication between the fisherwoman and the interpreter ensues.

The woman tells the team about the “Valley of the Temple” and the portal that opens every six years with the passing of a prophesied comet. As Officer Myra interrogates Jake, the audience gets to know that since being rescued from the tropical Burmese jungle, he has forgotten everything about his past. Jake has a mysterious tattoo of Buddha on his arm, which raises suspicion amongst the army personnel. Jake gets involved in a fight with the army, and it seems as if he is programmed to fight. As he marvels in the ancient art of Jiu Jitsu, the army men take a beating.

Myra is a good cop who seeks to help Jake. She gives him a “truth serum,” and he reiterates his claim of not remembering anything, barring the memory of a looming threat of invisible assailants who move fast. He is rescued by the master Jiu Jitsu artist Keung and comes to know of his name. The covert organization gets attacked by the invisible enemy, and afterward, by the army. Torn between the parties who claim to be his ally, Jake gets tossed from team to team until he meets Wylie.

Jake comes to know that he himself is part of an ancient mythical order which is constructed to quench the desire for combatting the “Space Man.” This alien entity that comes from space is Brax – the one who gave the world the gift of Jiu Jitsu. Jake is the chosen one, the “rabbit,” who has devoted his entire life to be worthy of Brax in battle.

While Jake does not remember anything, the audience comes to know that Jake ran away from the alien earlier, allowing him to wreak havoc on the planet. Wylie was the previous chosen one, and he did the same, but now they have a plan to defeat Brax and send him back through the wormhole forever. After being guided by Wylie, and some power-packed action sequences, they manage to devise a plan to take down Brax.

The finality of the film sees the fraternity coming in close conflict with the supervillain Brax. According to mythical scriptures, Brax is the ancient alien who has taught humans the art of Jiu Jitsu, and as part of a pact, he returns every six years to challenge a group of nine chosen fighters to defeat him in battle. They are supposed to fight him from the frontier with valor and bravery, and if any of them denies dueling with Brax, he will not hesitate to destroy the planet. However, in combat, Brax has the powers of healing and speed, and mortals throughout the ages have found it a near-impossible endeavor to match Brax in combat.

After the death of Wylie, Jake and the team try to strategically tackle the alien. An epic battle follows, and the interpreter helps Jake put a bomb in Brax’s wound within the time window in which it heals by itself, and Brax explodes in the time portal. The fumes most certainly indicate Brax’s complete annihilation. However, in a film that glorifies madness and chaos to reject rationality at the outset, Brax can regenerate himself while in the time portal, which leaves the scope for a sequel.

Does The Portal Get Closed Forever?

As the fisherwoman’s myth goes, Jake is part of an ancient order of mercenaries destined to combat the invisible enemy who emerges when a portal gets opened in the mythical “Valley of the Temple” with the passing of a comet. After every six years, a group of nine warriors stands in line, ready to combat Brax, but no one has been able to defeat him so far. Brax is a master warrior and coupled with his alien physiology, he is seemingly invincible as an opponent. However, Jake is born to assail him, according to legends. After the victory, Jake is visited by the same fisherwoman who tended his wounds.

The fisherwoman tells Jake that he has ended a 2000 year epoch, marking a new beginning in the history of the world. In the process, Jake can redeem his past mistakes and reinstate peace upon the uncharted mythical territories of the tropics. While Wylie discloses nothing other than Brax seeking to “play fair,” it would be apparent that Brax leaves them in peace after conceding defeat. The suggestion is that the portal has been closed by Jake, who has managed to defeat the supreme alien being and bring back peace to the world.