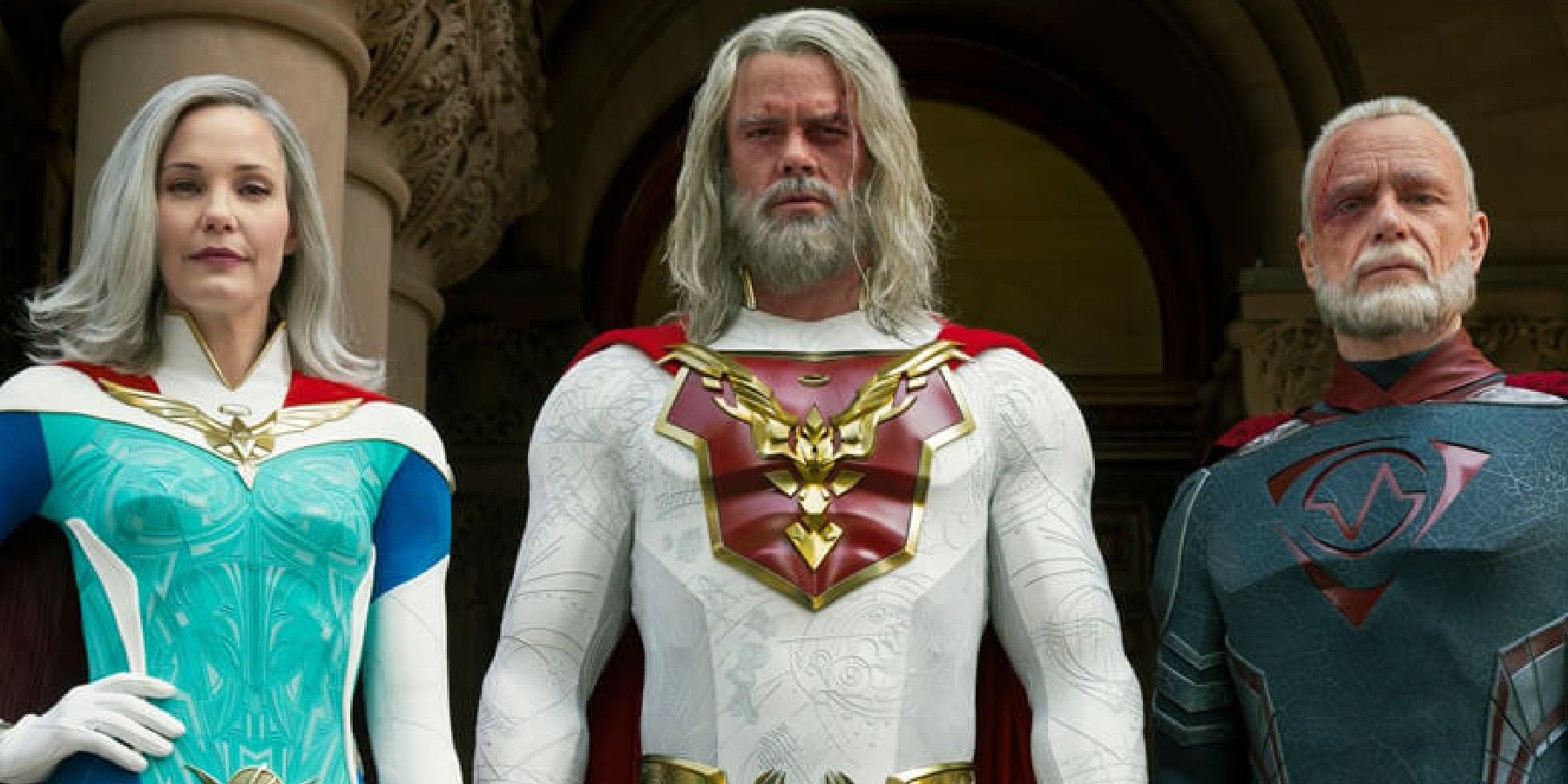 Life is a box. But do you intend to look in the boxes and reflect upon the past? Based on the eponymous comic series by Mark Millar and Frank Quitely, Steven S. DeKnight’s adult sci-fi superhero series ‘Jupiter’s Legacy’ is a dark and somber homage to the golden days of Superhero comics. The superhero comics were initially created to uphold the ethos of the American dream, and the Netflix original show attempts to explore the possibility of the next generation of American superheroes in a world marked by hatred, deception, and uncertainty.

Following three generations of the Sampson family of industrialists, the story unfolds on a grand scale resembling Homeric epics. As the hastily sketched saga comes to a close, there remain more questions than answers. If you have had difficulty in comprehending the web of narratives woven in the course of the series, we shall try to give you our own justification for the ending. SPOILERS AHEAD.

Sheldon Sampson, who is popularly known by his superhero alias “The Utopian,” is the leader of a superhero covenant called the Union of Justice. It’s an age of transition, and the first generation of the fraternity, including Sheldon’s wife Grace and his brother Walter, is in the process of passing the baton on to the next generation. A relentless preacher of the American ideal, Sheldon is a firm believer of liberal and corrective governance rather than taking the law into one’s own hands, but times are changing.

One of the valued friends of Sheldon, George, aka Skyfox, has fallen out of the Union, and Walter consoles a distraught Sheldon. When Sheldon’s son Brandon (“The Paragon”) butchers a clone of the super-villain Blackstar to save the other heroes, the conflict between a bygone ideal and a gloomy reality comes to the fore. Three of Brandon’s Union friends, Barry, Briggs, and Vera, bite the dust from the attack, and the tension among the union members reaches a boiling point.

Sheldon and Grace’s nonconformist daughter Chloe live off of her celebrity status as a supermodel with superhuman abilities, and she is increasingly dismissive about the ethics of the so-called superheroes. Both Chloe and Brandon seem to be affected by the overarching influence of Sheldon in their lives. Another story arc takes the viewer to the origin of the superheroes. In the Great Depression of 1929, when the iron industry of the Sampson family is dealt a blow, Sheldon and Walter’s father Chester Sampson jumps off the roof of the company’s building.

Capitalism is dead, but Sheldon finds a girlfriend in Jane who tends after him. Sheldon was the witnesses of his father’s shocking death, and he cannot get his head around the moment. He is visited by the grotesque specter of the father, who warns him of his fate. Sheldon has a childhood friend and confidante in eccentric elite George, who is a believer in his visions. While Walter and Jane are wary of relying on Sheldon, George helps him to put together the pieces of the puzzle.

Following the photo of a windmill, Sheldon goes on a journey through the American heartland while the voice of the father tries to thwart him off balance. Sheldon meets a person named Miller who tells him about the voices. His cryptic words suggest a place where the sea comes alive. Miller shows him a watch similar to the one owned by Sheldon’s father before committing suicide. Afterward, Sheldon sees his brother, George, and himself in a cultic communion among six people. We come to know that these six figures are the founding figures of the Union. 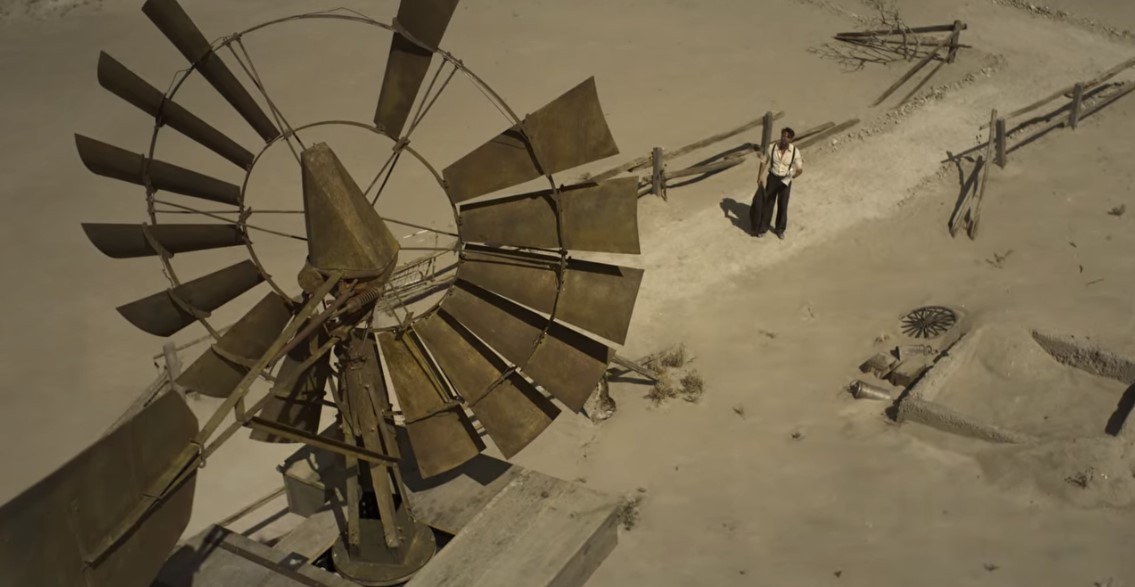 In a subplot, Hutch and his gang conduct shady business for a mysterious thug named the Big Man, making futuristic gadgets and running errands. Hutch, we come to know, is the son of George. As per the instruction provided by the Big Man, Hutch and his gang succeed in stealing a briefcase, but the group is dealt a blow when their car clashes with Chloe and a fight erupts. Chloe wounds most of them, but Hutch can escape with the help of his transportation stick.

Returning to the point of conflict from Chloe’s side, we see her going into a drug-addled party spree after the break-up. She seemingly abuses her superpowers to gain attention in media and friend circles while she abhors her superhuman origin. She and Hutch have a forbidden relationship as they are sons and daughters of adversaries as portrayed in the media. In the past, following the death of Miller, Sheldon returns home and steals the watch from the coffin of the father. Sheldon and George set out to convince their dad’s previous associate Fitz to accompany them.

Following the visions, Sheldon and the party embark upon an epic journey to the mythical end of the seas. Sheldon is a potentially unreliable narrator characterized by his trauma, and people don’t believe him like he has been warned. But in the finality of moments, they stick together as a team. After multiple hurdles, they survive the cacophony of the seas and end up on a mysterious island to fulfill their destiny. They become superheroes, but an old familial rivalry threatens the fate of the Union.

Jupiter’s Legacy Season 1 Ending: Does Walter Come Out of the Coma?

Walter is the domineering brother of Sheldon, who is known by his alias Brainwave. Walter’s power is to imprison people in their own mind spaces, as is shown in the troop’s battle with the Blackstar clone. He holds the clone off in a simulation, but the clone breaks off and wreaks havoc on the team. Walter is constructed to be a volatile character from the very beginning. In an unfolding drama marred by the grey zones, we come to recognize Walter as a coward and scheming person who blames others for his own shortcomings. 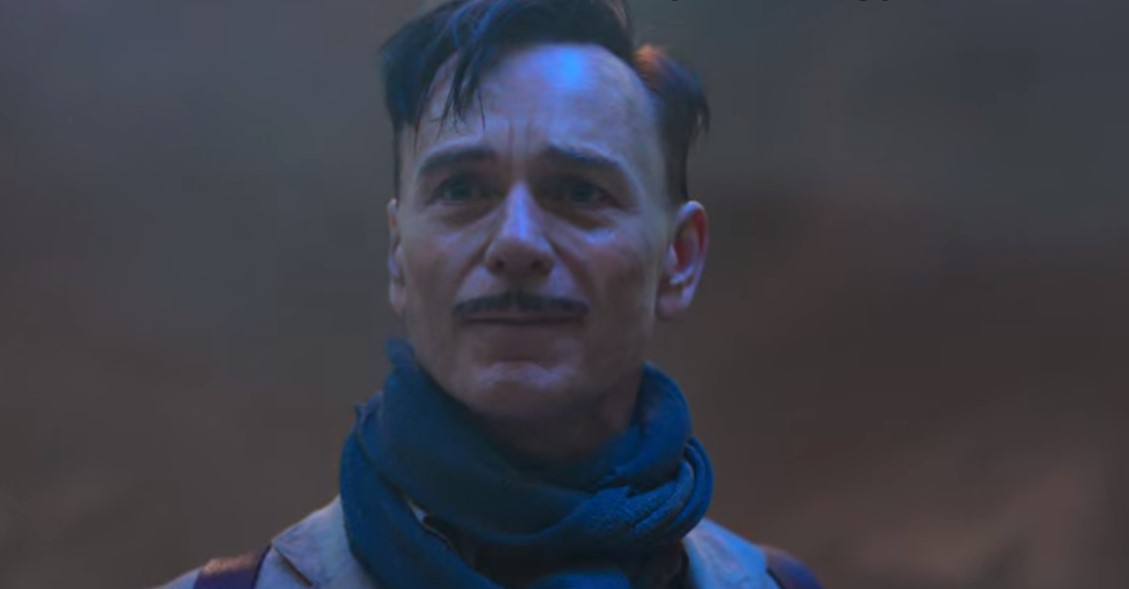 During the journey to the other side, Walter comes to mistrust Sheldon’s instincts on multiple occasions. In the present timeline, he visits Blackstar in Supermax to get into his mind and know the whereabouts of Skyfox. As Walter tortures Blackstar, we feel like he is not the ideal superhero. In the final episode, when he tries to tap into the disfigured brain of Blackstar’s clone, he is trapped in a shadow realm by Skyfox. He is seemingly defeated by Skyfox, but then Grace appears in the realm. Meanwhile, Raikou keeps Walter in the state. In essence, Walter comes out of the coma with the help of Fitz, Grace, and Raikou.

But the final twist is bound to leave the audiences scratching their foreheads. Walter’s distant daughter Raikou can get into the head of Walter, and she finds out a sinister truth about Walter. It was Walter who created the clone of Blackstar and released Blackstar from imprisonment. He wants to separate Sheldon from his family and preside over the Union. It is not Skyfox who is the enemy of Sheldon and the Union – it is one rather close to the home. Upon knowing Walter’s secret, Raikou blackmails him for money, but Walter finds it safer to eliminate her instead. Walter is a person who can even kill his own daughter to fulfill his own means, and in the finality of events, he is exposed as the central threat to the integrity of the Union.

Blackstar is released from Supermax, following which the prison facility goes into lockdown. Blackstar is the most powerful opponent of the Union and is a great deal more cunning than his clone. While all the other first-generation heroes are busy fighting Skyfox, Brandon and Sheldon are left to confront the formidable force. Brandon is eager to fight but takes a hard beating from Blackstar instead. Blackstar teases the Utopian to choose between his son and his code, and he is seemingly immobilized, but in the nick of time, Petra Small appears on the scene.

They manage to fight Blackstar, and Brandon beats him to unconsciousness. But as Brandon comes to understand the meaning of the code, he does not kill Blackstar. While Sheldon assures Brandon that he would choose family over ideals, what he would actually do is up for debate. Blackstar is portrayed as a super-villain not caring for anyone, but his evil is more transparent than the deceptive cunning of Walter. While he is defeated in the finality of the moment, he is still alive.

Where is Skyfox? What is the Reason for His Antagonism with the Union?

Skyfox remains absent for most of the present storyline, but as we get a glimpse into the past, we come to know of the unbreakable friendship of Sheldon and George. Therefore, the news of Skyfox’s antagonism with the Union creates intrigue in the mind of the viewer. George also has his own flaws, but none of them are as glaring as Walter’s. In the final episode, however, when George imprisons Walter in a simulated space, we come to realize that he is not far from the gruesome villain that he is painted to be from the beginning. 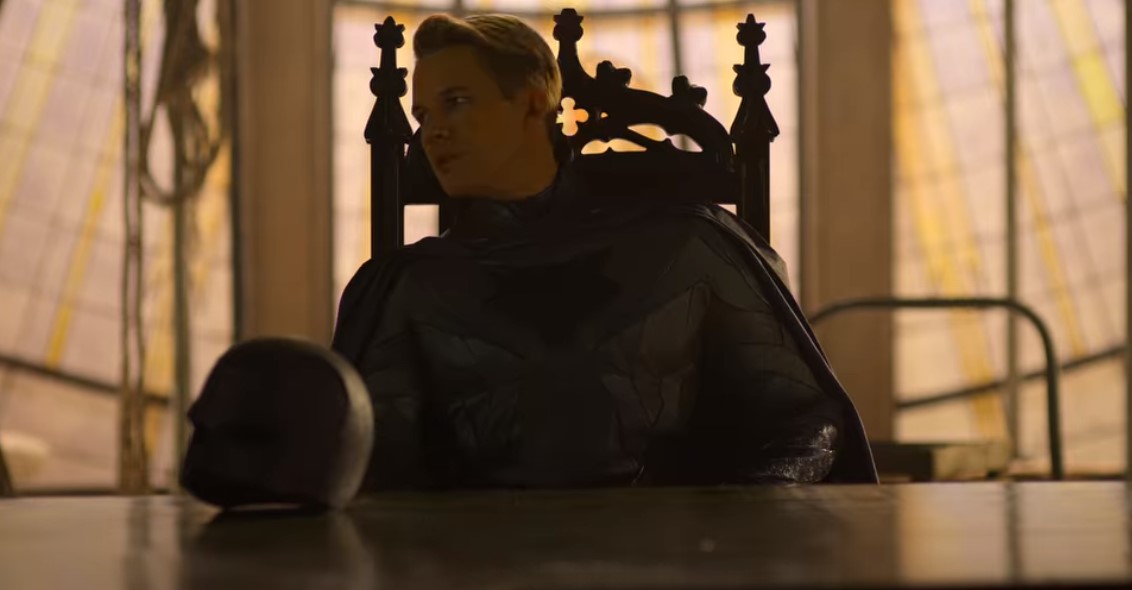 When disrupted by Grace, he freezes her in mid-air and goes on to show the future to Walter. As Walter shows Grace, Skyfox is implicated to be the killer of Brandon and Sheldon. However, as we know that Walter can conjure realities, we cannot be fully certain of the exposé. We also do not know the reason for his exit from the legion of heroes. But the transformation of Chloe and the exit of Skyfox stems from the same moment of rupture.

It also seems that the best friends fell out due to their ideological differences. While Sheldon does not want to get involved in positions of power, George wants the heroes to govern America and the world. Sheldon and George’s rivalry unfolds like the antagonism between Professor X and Magneto in ‘X-Men.’ In all possibility, Walter also has a major part to play in mobilizing the heroes against Skyfox.

What is the Significance of the Watch? Is Chester Alive?

The watch seems to be an important instrument in finding the location of the mysterious island. The watch is seen in Miller’s house and the pocket of Chester. It breaks at the moment when the voyagers are disturbed by the voices from the seas. The watch also works as a compass which gives the crew directions. But its significance reaches beyond these apparent aspects. It seems that Miller and Chester were connected to a bigger organization that attempted to go to the secret island before. 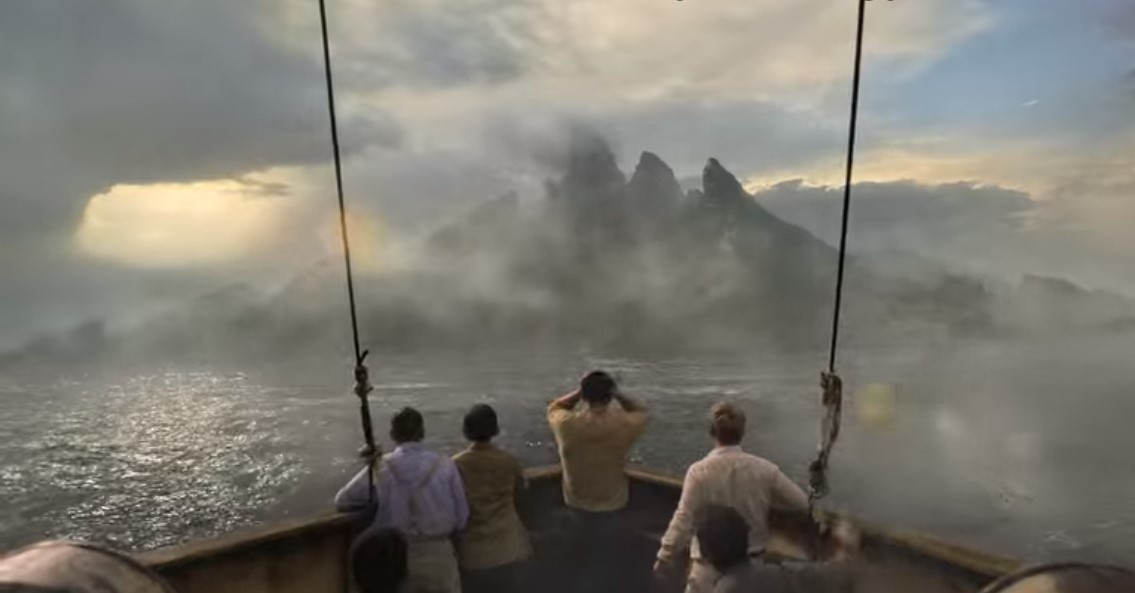 When we revisit the heroes in their moment of glory, Chester appears from what looks like a magical flower to congratulate the group for their bravery and diligence. While previously only Sheldon could see Chester, now everyone can, and we believe that maybe Chester is alive. However, in a world of graphic splendor, he can be a simulation brought back by the creator to give meaning to the moment. Chester embodies the neoliberal spirit of America as he rewards the worthy with superpowers. The watch, on the other hand, symbolizes the precedence of time in the plot.