What Happened to Kalief Browder’s Mother? 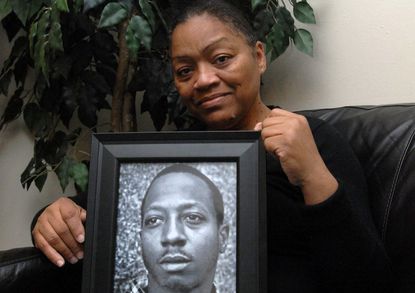 ‘Time: The Kalief Browder Story’ is a Netflix docuseries that shows how the criminal justice system tragically failed a 16-year-old boy from Bronx, New York, and ultimately pushed him to commit suicide. It brings out everything that is wrong with the system and how it all miraculously happened to Kalief Browder in the span of just three years. The comprehensive review of every aspect of his case successfully points out that the system has been broken for decades, it’s just, we notice it more now.

There are exclusive interviews from his friends, family, a few politicians, and activists featured in this story, but one person who caught our attention the most was, of course, Venida Browder, Kalief’s mother. Her resilience, her strength, and her hope for a better future made her a good mother as much as it made her an inspiring woman.

Who Was Venida Browder?

Venida was Kalief’s mother for all intents and purposes. His own biological mother was a crack addict, so when he was born into the system, he was given to Vanida Browder, a foster parent, who was also raising Deion and Kamal, Kalief’s biological brothers. Being a foster mother, she had over 30 kids in her house during her lifetime, but she ended up adopting just 5, and she raised them all as if they were her own.

Apart from the two already mentioned she adopted Akeem and Nicole, and with her husband, Everett Browder, she already had two sons, Shihahn and Raheem. Raising so many kids in the poverty-stricken borough of Bronx, New York, was in no way easy, but she always made do with what she had and ensured that her children went to school and never had to scrounge for food. Even when her husband left her and the family, she never backed out from caring for her kids.

When Kalief was imprisoned in 2010, she showed incredible grace and compassion. She astounded people with how much she was willing to do for her family. Even with her diabetes and her heart condition, which left it functioning at just 25%, she still traveled all day just to get a glimpse of her son while he was in Rikers. Not once did she give up on him. Every court date, every family visitation day, she was always there to support him.

Even after Kalief’s tragically passed away, she was doing her best to get him justice. She and his lawyer, Paul Prestia, added a $20 million wrongful death lawsuit to the already ongoing civil rights lawsuit against the city, and worked hard to raise awareness about what wrongful convictions can do to innocent people. She basically turned into an activist.

Venida also sponsored The Kalief Browder Memorial Scholarship fund to make sure that her son’s memories remained alive. The fund provides financial aid to previously incarcerated people and allows them to attend Bronx Community College full-time, just like her Kalief. She transformed lives and took a stand just because she wanted justice for her son, but unfortunately, she passed away before she could see any real change.

How Did Venida Broder Die?

After suffering from a heart attack, on October 14, 2016, Venida passed away at St. Barnabas Hospital in New York City. Her health had been deteriorating ever since she had lost her son. In her grief, she used to forget to take her medications and began to overwork so as to not feel the pain. Therefore, in just a little while, her heart’s function went down to 19%.

She was on the transplant list, but because of the two previous attacks and the three stunts already putting too much strain on the heart, it was too late. Her legacy is her kids. She left behind a whole lot of love and memories for her family, which included her creativeness and her voice. After all, she wasn’t the vocalist of the soul music trio “Lady T and the Sapphires” for nothing. With Kalief now, Venida is finally at peace. (Featured Image Credit: Sam Costanza / New York Daily News)