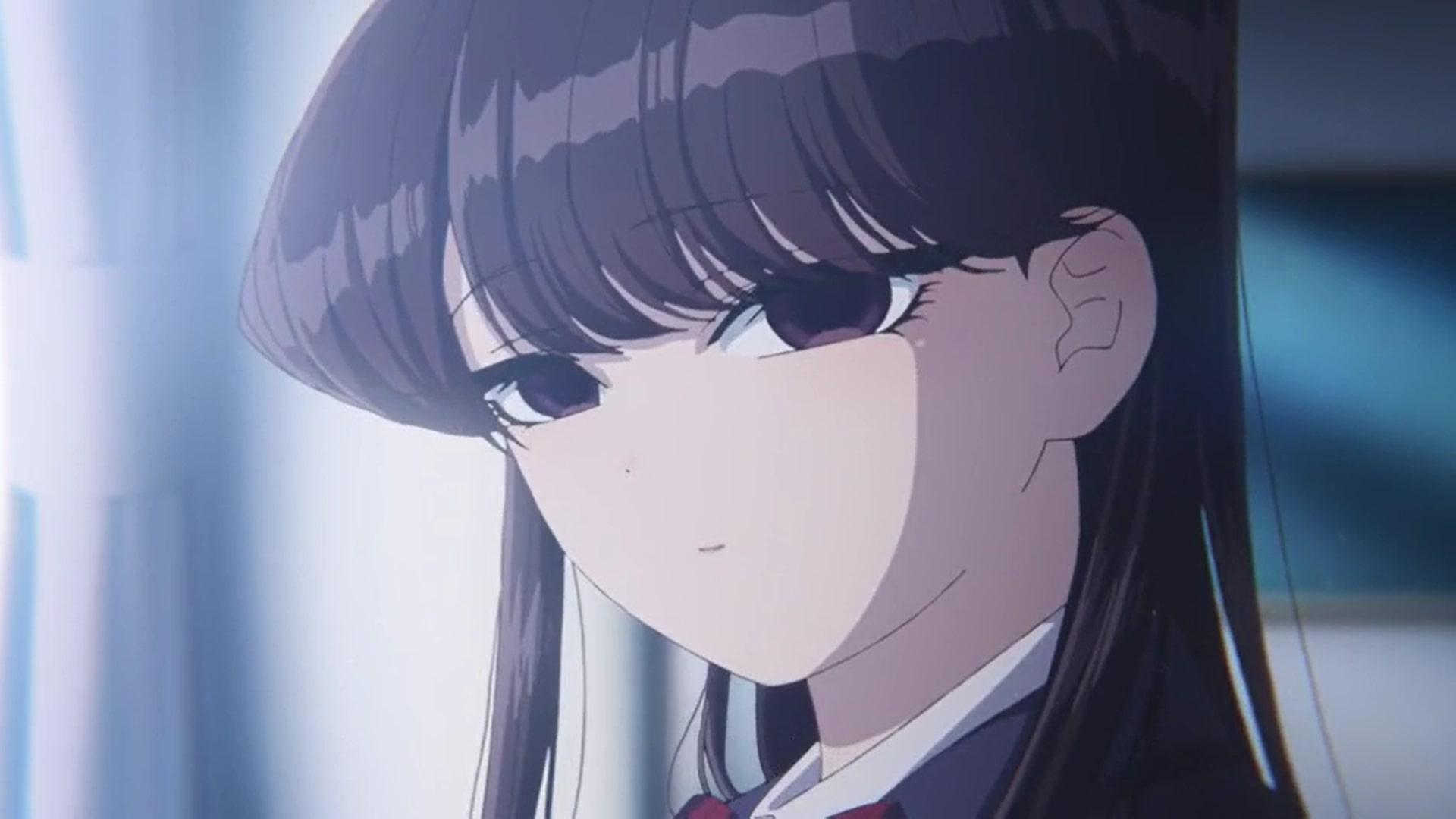 In the twelfth episode of ‘Komi Can’t Communicate‘ season 2, titled ‘It’s just White Day, and It has just been one year’ Tadano is still fondly remembering Valentine’s day when he received chocolates from Komi. However, he is unable to interpret how she truly feels about him. Meanwhile, it’s already been one month since Valentine’s day, and he is running out of time to gift the titular protagonist something in return. Here’s everything you need to know about the ending of ‘Komi Can’t Communicate’ season 2 finale. SPOILERS AHEAD!

Studying at his home, Tadano suddenly recalls Valentine’s Day when Komi came to his house to give him hand-made chocolates. He is still unsure whether he should interpret the incident romantically or not. All of a sudden, he remembers that it has already been a month, and he is yet to give Komi a return gift. With the White Day approaching, the pressure is now on him to find something special for the titular protagonist as a token of gratitude. 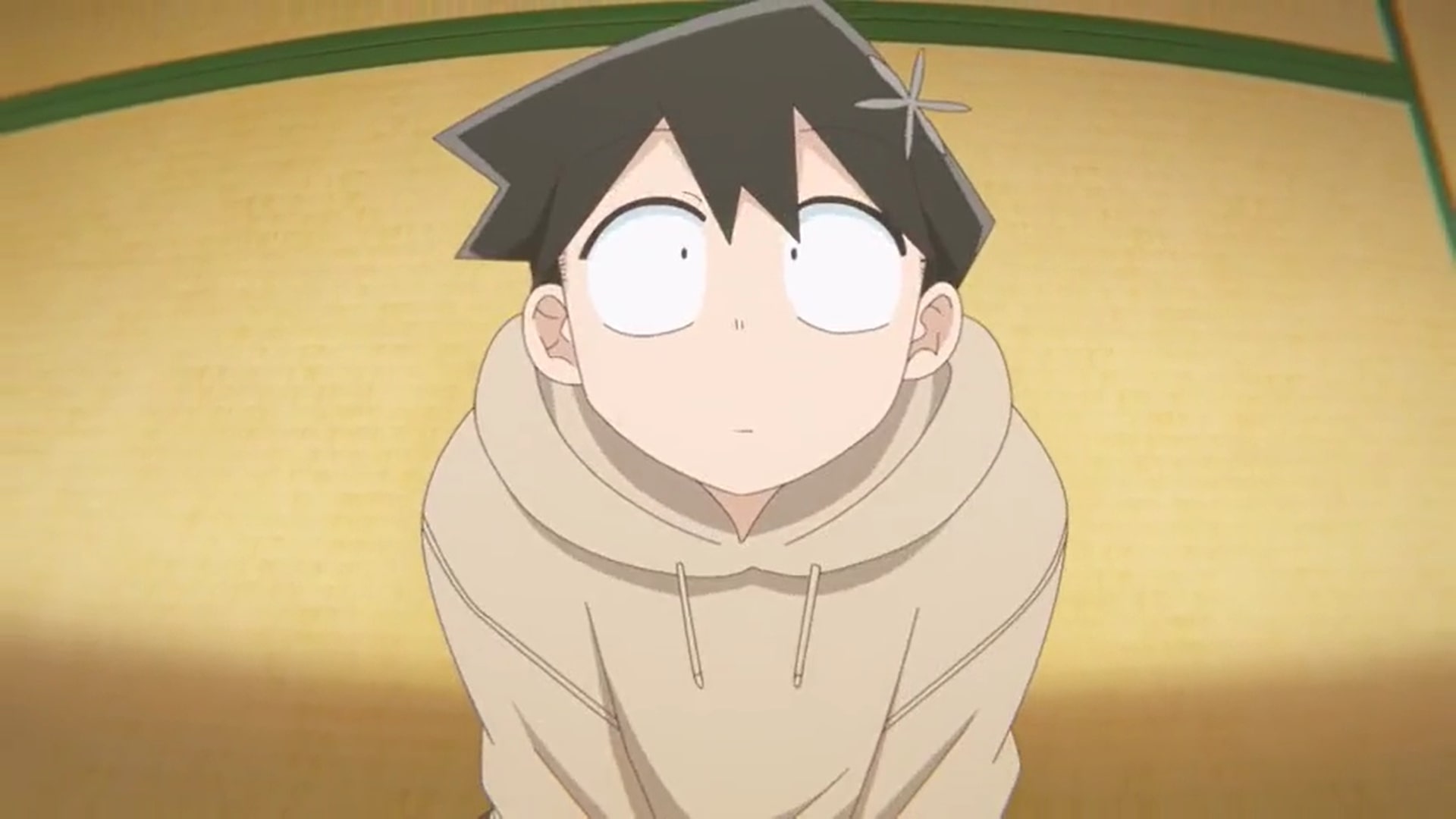 While he remembers Komi fondly, Tadano’s sister barges into the room, suspicious of what his brother is up to. After overthinking for some time, he finally asks her what he should be gift others on the White Day. Hitomi realizes that on the evening of Valentine’s Day, she saw his brother meeting someone with long hair. Although she only saw a shadow, Hitomi is convinced that his brother received more chocolates that day than she knows of.

While she does not confirm with Tadano whether he met a girl or a boy, she asks him to think about whether he likes the person or not. As Hitomi’s brother remembers the time he has spent with Komi, it becomes increasingly clear that he likes her. As soon as he confirms the same, Hitomi claims she knows just the right sweets that he should buy, which will also look good on social media. However, she also argues that as long as the person likes him back, any present will do the trick. 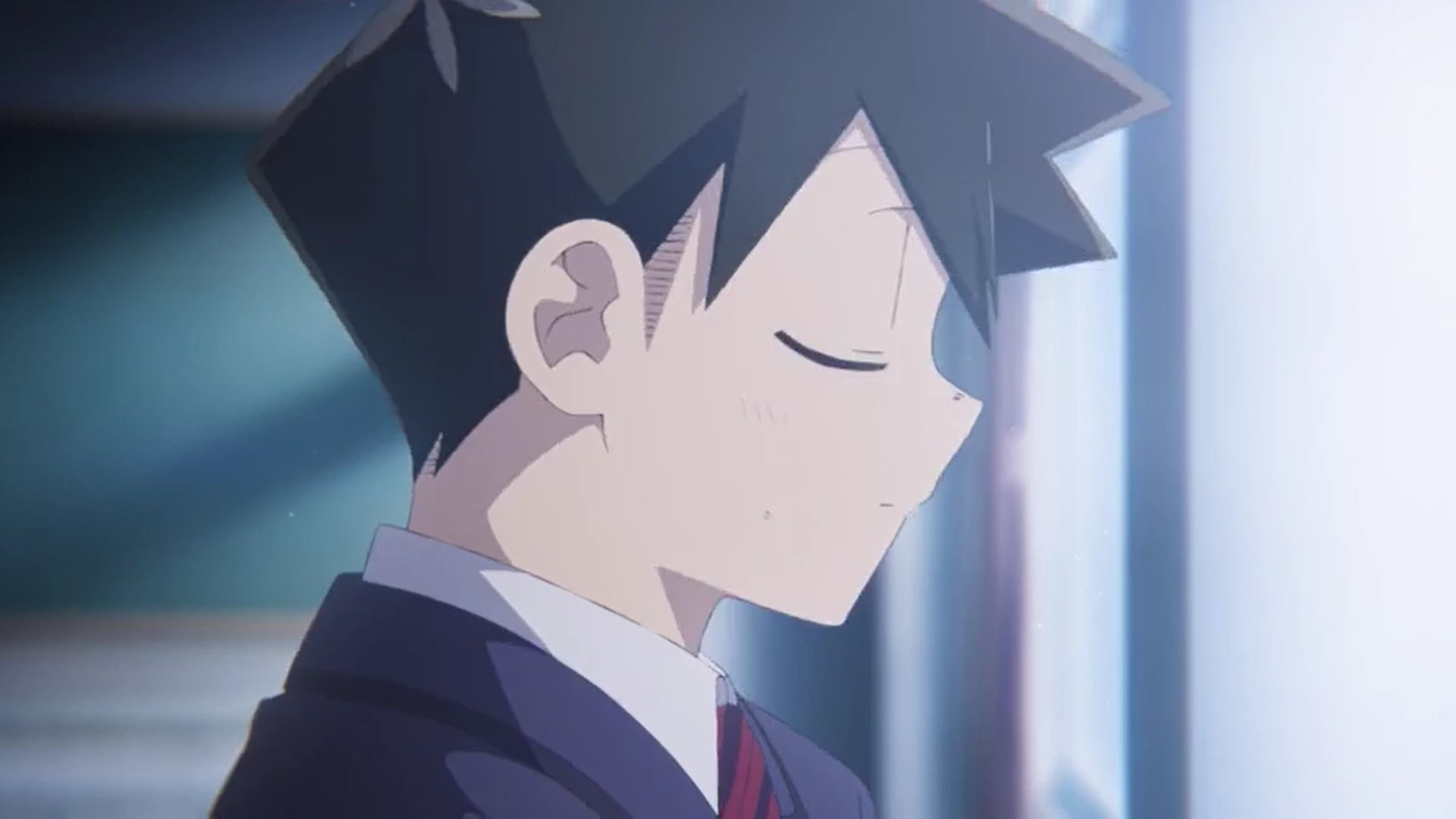 The following day at school, Tadano has to muster all his courage to approach Komi finally. However, Katai is already there, right next to her. So, he does manage to ask the titular protagonist for dinner later that day but ends up making it seem like he was talking to Katai. Because of the last moment of hesitation, he ended up going out with his guy friends and failed to give Komi her return gift.

Komi Can’t Communicate Season 2 Episode 12 Ending: What is White Day? Does Komi Finally Get a Return Gift From Tadano?

White Day is an annual ritual that happens exactly one month after Valentine’s Day on March 14. First celebrated in Japan in 1936, it did not gain much traction in the initial years. However, the yearly affair became popular in the 70s and is now celebrated in several Asian countries. On this day, people usually get reciprocal gifts for people who have gifted them something on Valentine’s Day. White chocolate was a popular gift on the occasion in the early days; over time, people started buying jewelry, white clothing, and other sentimental gifts for their loved ones as well. 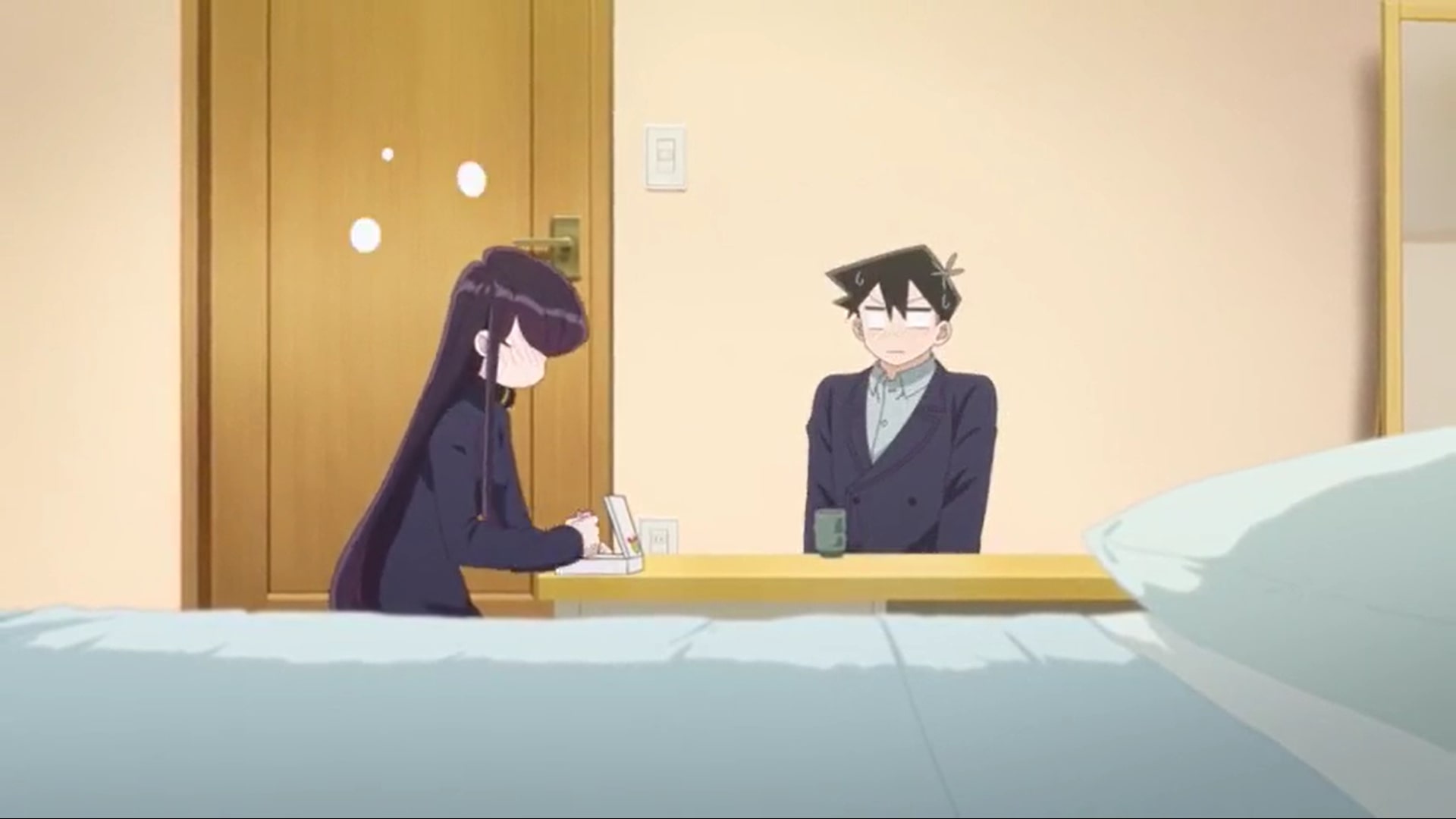 Although Tadano failed miserably to ask Komi out for dinner on White Day and did not even give her the return gift, he decided not to give up so easily. He gathered all his courage and visited her house. Unfortunately, he was greeted by her mother, who informed Tadano that Komi was not at home and had just gone out for some work.

While Tadano wanted to live right away, Komi’s mother insisted that he waits for her. While he sits alone in her room, Komi’s father, who appears to be suspicious of him, suddenly arrives in the room. However, he just continuously stares at Tadano without saying a word, which naturally makes him quite uncomfortable. Luckily, Komi soon arrived and pushed her father out of her room.

She suddenly realized that her room was messy and cleaned it up in a hurry. As soon as she sat, Tadano gave her the gift that he had bought. But both of them were too shy to talk about anything, so Tadano decided to leave. Komi opened the present as soon as she was alone and found hand cream. She applied it right away and momentarily thought about Tadano.

What is Eraser War? Who Wins the Game?

Eraser war is a childish game where three or more participants compete against one another. All one need to play with it is an eraser and a desk. The participant whose eraser stays on the desk till the end wins; however, one can be eliminated if the other person knocks their eraser out or if one accidentally pushes their own eraser out of the desk. 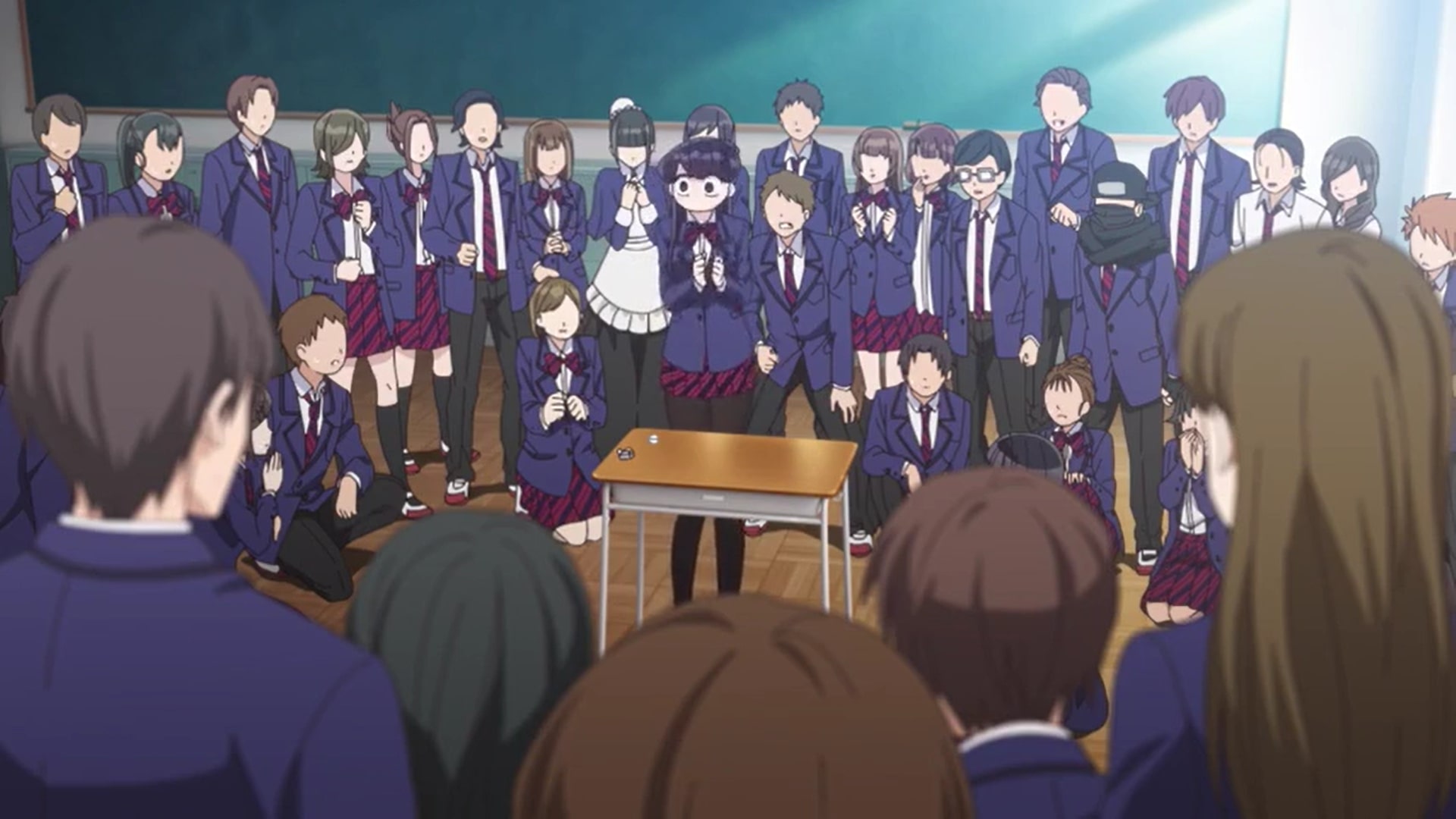 In the first round, Najimi, Komi, Tadano, and Yadano compete against one another. The titular protagonist takes the first shot, but she pushes her eraser too slowly, and it barely moves a few centimeters from its place. However, her challengers are not planning to go gently. First, Najimi tries to eliminate her competitors by pushing the eraser too hard, but she fails miserably as her own eraser gets knocked out of the desk.

Unfortunately, Tadano and Yadano do not learn their lesson from this and end up getting disqualified in a similar fashion. Soon the whole class joins in, and after several rounds, Komi becomes the first person to knock someone’s eraser out of the desk.

Do Komi and Tadano End Up Together?

After the Eraser War is over, all the students head home except for a few. After Najimi and others also leave, Tadano and Komi talk to each other when it suddenly starts raining. As they stare out of the class from the window, the two friends remember the year that they have spent together. Komi expresses her sadness that they may end up in different classes soon. However, she also feels grateful that she managed to make so many friends. 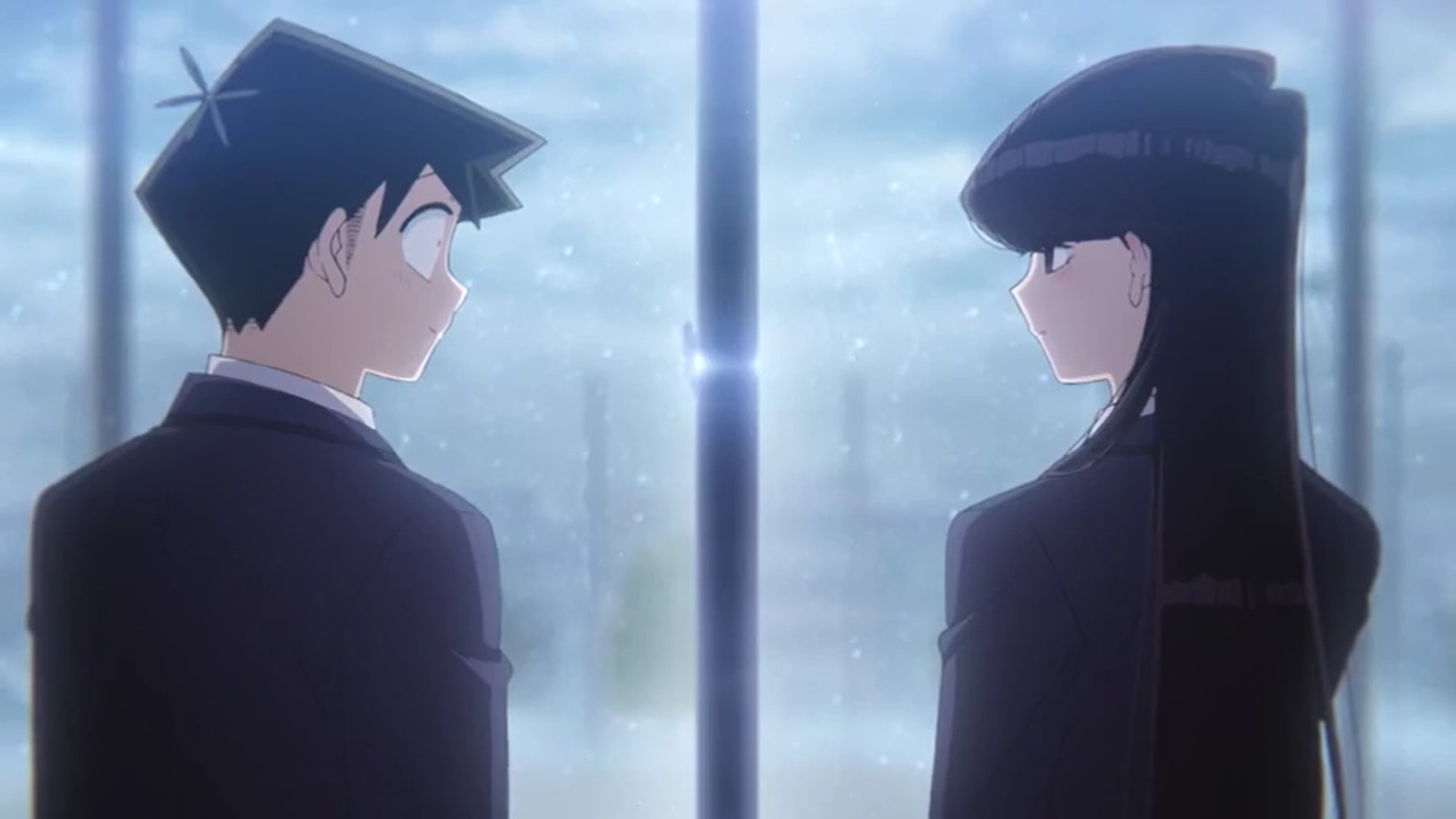 Tadano praises Komi for what he has achieved and is about to say something romantic, but he can’t find the right words to express what he feels. As the duo stares at each other, they are interrupted by Najimi, who suddenly barges into the classroom. So, Tadano and Komi do not propose to each other, but it appears that they are beginning to become more conscious of their feelings than ever before.