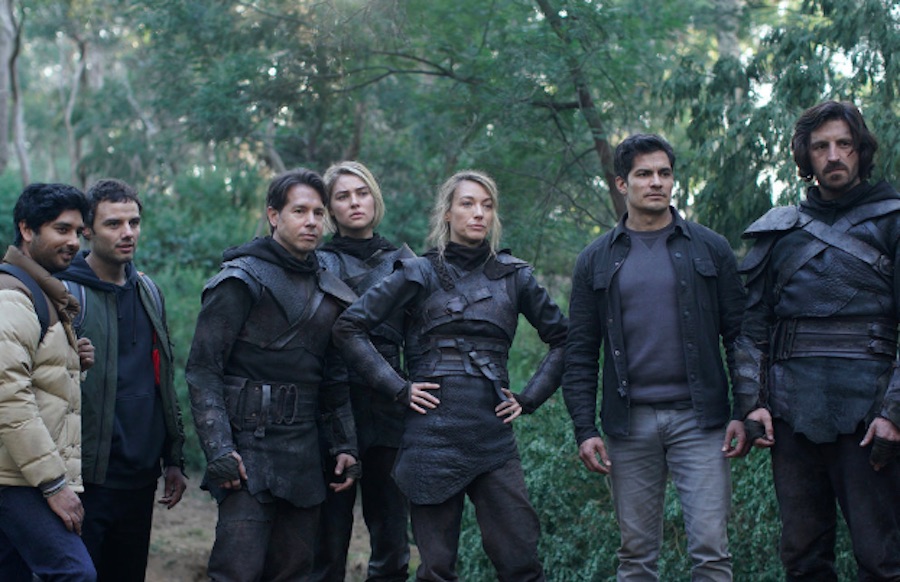 NBC’s ‘La Brea’ follows the story of the people who fall into a giant sinkhole in modern-day LA and find themselves in 10,000 BC. While the first season had built the foundations of the show, setting up mysteries as well as the complicated relationships between the characters, the second season reveals a lot of new things, which only pose further questions. The sixth episode solves the biggest mystery of Gavin’s life, while also giving him a way to reunite with his family. However, he, his family and his friends are still in danger. Here’s what the events of this episode mean for the characters in ‘La Brea’. SPOILERS AHEAD

At the gates of Lazarus, Gavin and his friends have an altercation with the guards, who spot Silas in the distance. While the rest run away, Gavin is captured and taken inside the building. Here, he meets James who reveals that they are both from the future where the world doesn’t look so good anymore. James is also Gavin’s father, but that doesn’t mean that Gavin can trust him just yet. Silas describes James as a very dangerous man. Silas, Eve, Lizzie, Sam, and Levi come up with a plan to rescue Gavin. They enter Lazarus through a secret door but are caught by the guards.

In 1988, Josh and Riley help Caroline get the time travel research she’d been looking for. However, some men attack Caroline and take her. She leaves behind a mysterious thing for Josh and Riley, who have no idea what it is. For help, Riley tracks down her father, who is still a teenager in ’88, and gives him a message that alters Sam’s memory in 10,000 BC, giving him a rendezvous point for when they arrive in ’88.

La Brea Season 2 Episode 6 Ending: Why did James Lie to Gavin About the Portal?

Despite all the time travel mystery happening around, the only thing that Gavin is first and foremost focused on is getting his family back together. He asks James’ help in going back to ’88, revealing that Aldridge had told him about such a portal. James, however, says that the portal actually leads a person to the future. This is disappointing news for Gavin, but when he reunites with his group, Sam reveals that Riley in ’88 told him about the portal in Lazarus that will lead them to ’88. This means that James had lied to Gavin. But why?

The Lazarus project was started by four people, out of which only one is in charge of it now. The other three were sent on the run, which means that this one person was the problem. The fact that James is not a trustworthy person is also revealed in the reactions of the other three founders of Lazarus. Both Aldridge and Silas had warned Gavin about the dangers in the building. In ’88, Caroline too seemed scared, or at least, wary of James. This means that something happened where James parted ways with his group, but not on the friendliest of terms.

James had been looking for Gavin all this time, but it is curious as to how he couldn’t find him when the boy was, as Gavin said, only a few miles away. Moreover, if James really loves Gavin, why wouldn’t he want him to reunite with his family in ’88? Perhaps, there is more to James’ motivations and his seemingly sentimental attachments. He knows Caroline is in ’88, and if Gavin goes there, he’ll meet his mother again. James doesn’t want that to happen. But why?

It is clear that James and Caroline’s differences go much deeper than simple marital troubles. Caroline wants to shut down Lazarus and stop the sinkholes and the tidal waves once and for all. James, however, is not ready for that yet, and it looks like he doesn’t care how much harm his research does to the world. This sets him up as the villain of the story who will do everything it takes to stop the good guys from shutting his plans down. Gavin is one of the good guys and James knows that, which is why he lies to him about the portal and tries to keep him in 10,000 BC.

While Gavin and Sam succeed in going to ’88 and reuniting with their families, Lucas and Scott are left behind in 10,000 BC. In the fight at the gates of Lazarus, Lucas is hit by the electrocution device, the same thing that had killed Eddie in Season 1. This is troubling news because this affliction doesn’t have a cure, not yet at least. No one knows how exactly the weapon works and why the injury advances into something cancerous that spreads throughout the body. By the end of Episode 6, Lucas’s situation has worsened so much that it looks like he might not survive it.

As every episode delivers a new revelation and the problems that had seemed insurmountable previously can be magically solved in just a scene, we wouldn’t give up on Lucas just yet. His character has developed a lot since he first appeared on the show, and to kill him just when he had become a good guy would be rather tragic. Moreover, he, Scott, and Rebecca are the only main characters left in the clearing, which makes them much more important to continue the story in 10,000 BC now. This means that Lucas still has a part to play in the events that are to happen next on ‘La Brea’.