Ed Sinclair’s ‘Landscapers’ focuses on the harrowing 1998 murder of William and Patricia Wycherley, an elderly couple living in Mansfield. The HBO true-crime limited series — with its stylistic editing, dark humor, and breaking of the fourth wall — primarily focuses around the Wycherleys’ daughter and son-in-law, Susan (Olivia Colman) and Christopher Edwards (David Thewlis).

In the show’s premiere episode, we are exposed to the fiercely loyal Edwardses and their horrifying secrets. After the police find two bodies buried in Mansfield, details of the couple’s crime begin to unravel; Susan and Christopher decide to return to the UK to face the authorities. In the second episode, we see how the Edwardses communicate with the police and what version of the truth they believe in. Here’s ‘Landscapers’ episode 2 recap and ending, explained. SPOILERS AHEAD.

The episode opens with a flashback of a teenaged Susan running around. Then, we shift to William and Patricia, with the former playing the piano and the latter drinking alcohol. Christopher’s parting advice to Susan — right before they are detained separately for questioning — keeps playing throughout the episode. “Just tell our story simply and calmly. No need to make anything up. Just tell them the truth,” he says.

We then see Douglas Hylton, Susan’s solicitor, advising her to say “no comment” when the police interrogate her. Moreover, he points out that the Crown Prosecution Service (CPS) only has till the night to present enough evidence to either win a trial or get an extension. Susan tells him her version of the story and he writes it down for the police.

Emma and Paul come to question Susan. Susan comically says “no comment” to a bunch of questions and Douglas reads out her statement regarding the night of the Wycherleys’ murder. Meanwhile, DCI Collier discovers that the Edwardses have dodgy finances and were friends with Gérard Depardieu, a French actor.

Throughout the episodes, we see flashbacks of the first time Susan and Christopher went out on a date; she meets his kind mother and he walks her back home later. Meanwhile, Christopher refuses to use a solicitor, choosing to speak to the police on his own. His story about that fateful day in 1998 is the same as Susan’s. He explains that he wanted to go to the police to talk about the Wycherleys’ murders but didn’t because his wife is “very fragile.”

Later, Sandra Winters from the forensic financial department discovers that Susan opened a joint account with her mother on the next working day after the Wycherleys’ deaths and transferred all the funds from her parents’ account to it.

The police get frustrated as they do not have hard evidence against the Edwardses that can bump up their manslaughter charge to a double murder charge. Emma decides to handle both Susan and Christopher’s interviews. As Emma manipulates Susan and Christopher, cracks appear in the carefully worded story both have been parroting all day.

Christopher lets some bits of information slip, and when Susan panics about what her husband has revealed she gives a detailed account of what happened the night of her parents’ deaths. Meanwhile, as Susan reveals shocking information about her relationship with her father, we see flashbacks of when she confessed the same to Christopher at the start of their relationship. Glimpses of her terrible childhood and youth are also shown; we realize that Christopher witnessed how horrible Susan’s parents were when they locked her out of her own house the day of her first date.

Later, Paul reveals that the police will be applying for extra custody time in light of the new information that has been obtained from the Edwardses. When the end credits start rolling, we again see bits of old news reports talking about the story Susan and Christopher presented to the cops and how the authorities refused to believe it. The words “manslaughter” and “provoked” are made to stand out in the newscasters’ voice-overs.

Landscapers Episode 2 Ending: What Story do Susan and Christopher Tell the Police?

Throughout the episode, we hear Christopher’s litany of “just tell our story” playing around in Susan’s head. She gives an extremely detailed version — mentioning even trivial information such as the fact that she took the route number 450 train from Victoria Coach Station to Mansfield — of what happened in May 1998. Her statement reads: “I am not responsible for the death of my father. I believe my mother shot him.” Explaining Patricia’s death, it continues, “I did in fact shoot and fatally injure my mother but only after severe provocation from her. I was in a very fragile state of mind at the time.”

Susan explains that she informed her husband about the murders only a week later. Meanwhile, Christopher sticks to the same story, emphasizing how they buried the Wycherleys’ respectfully a week after their deaths. He maintains that his wife was provoked into shooting her mother. The police do not believe the couple’s story as they are understandably suspicious about why the Wycherleys died after Susan visited them after more than a year of no contact.

How Do Susan and Christopher’s Stories End Up Differing From Each Other?

Emma’s careful verbal and psychological manipulation of Susan and Christopher leads to both of them accidentally revealing information they had initially decided not to divulge. Knowing that the couple is bound to falter as they are unable to communicate with each other and corroborate their stories, Emma looks for weak links in their claims. Susan, very obviously the feeble-natured one in the relationship, almost immediately falls prey to Emma’s tactics.

We first see Susan panic when Emma tells her that Christopher is cooperating with the police. Susan gets angry at Douglas, exclaiming: “You said he wouldn’t talk!” Later, Christopher explains how Susan’s father had been abusive and her mother an occasional alcoholic. He insists that Susan couldn’t have shot her father as he had too much power over her. The police tell him that it seems as though the same person shot both William and Patricia. It becomes obvious that the Edwardses are hiding facts.

Christopher explains how he met Susan on Tuesday (after the bank holiday weekend) and then, later on Friday, accompanied her to her parents’ house. They bought fish and chips on the way and upon reaching the house sat down to watch television. When Emma asks whether he could smell the decaying bodies of the Wycherleys, which had been stashed in the upstairs bedroom, Christopher gets worked up. Later, Emma asks Christopher about Susan’s decision to open a joint bank account and he says, “Susan is sometimes economical with the truth.” Then, he says, “Susan has always had much bigger things to worry about than money.”

However, Emma gets on tape their conversation regarding Susan being a “mercenary” and uses the same to goad Susan into revealing information. The police also mention that Christopher disclosed that Patricia confessed to something to Susan the night of her death. A crying Susan then explains what happened.

Whenever the Edwardses repeat their version of the story, we see a staged scenario around them wherein the characters on the screen (Susan, the police, Christopher) seem to experience the story being performed out in real-time. When their stories falter, the background goes black. Such visual cues and backdrops serve to highlight the twisted nature of the truth the Edwardses believe in.

What Did Patricia Wycherley Reveal to Susan the Night of Her Death?

After Christopher reveals that Susan’s parents were abusive and that Patricia revealed something to Susan on the night of her death, the police urge Susan to talk about her parents. Susan explains how her parents were always fighting; during that fateful weekend in May 1998, she awoke from her sleep at the sound of gunshots. 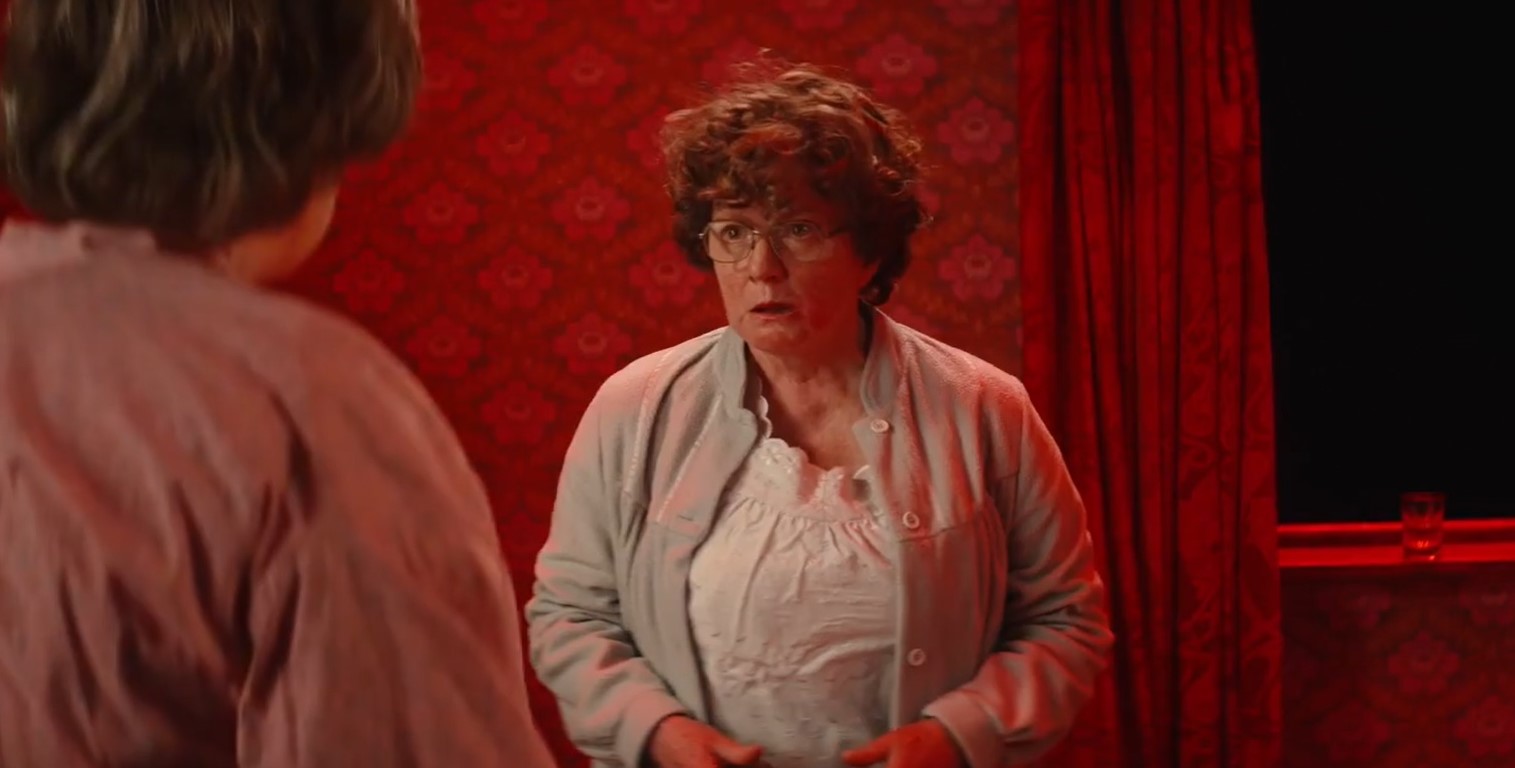 Susan elucidates how she saw an intoxicated Patricia standing with a gun next to her father’s dead body. She then claims that Patricia waved the gun at her and called her husband a “grabby little man.” When she threw the gun on the bed, Susan picked it up to be on the safer side. “God knows why you’d care [about William’s death]…after everything you’ve been through,” Patricia blurted out, and Susan realized that her mother knew about the abuse.

Thus, we find out that Patricia was aware that William was sexually abusing Susan during her growing years. “I hated him for years. I hated you too,” Patricia told Susan. “I know what he did to you. I knew and I just let it happen,” she added, sending Susan into a crying frenzy. “He didn’t even want me…after that, he couldn’t even get it up!” her mother stated angrily.

Susan tried to call Christopher but her mother told her that he’s just using her for sex and will not come to her aid. The final straw for Susan was when Patricia said, “He [Christopher] doesn’t love you. Nobody loves you. God knows I tried but it’s impossible to love you. It would have been better for all of us if you had never been born.” A weeping Susan then shoots her twice in the chest. This is the provocation that the Edwardses keep mentioning.

The stylistic staged scenes (with props and sets) pertaining to the Wycherleys’ murder and Patricia’s confession are interspersed with flashbacks from Susan’s first date with Christopher. This makes it apparent that only Christopher could make her feel safe after years of abuse. Susan also confesses that it was Christopher’s idea to bury the bodies as he wanted to protect her from the police.

Read More: Where Are Susan and Christopher Edwards Now?