Last Light Ending, Explained: Who Is Behind the Oil Crisis?

Based on the 2007 namesake novel by Alex Scarrow, ‘Last Light’ Is a Peacock action thriller series. The story follows the Yeats family. Andy Yeats (Matthew Fox) is a renowned Petro-chemist who works for a major energy and oil company. In the days leading up to the experimental surgery for his son’s degenerative eye condition in Paris, he is pulled away to the Middle East because of a developing emergency, though he promises he will be there on the day of the surgery. Andy’s wife, Elena (Joanne Froggatt), subsequently leaves for Paris with their son, Sam (Taylor Fay), while their daughter Laura (Alyth Ross) stays back in London. As the world starts to break down around them, Andy and his family desperately try to reunite with each other. If you are wondering what happens at the end of ‘Last Light,’ we got you covered. SPOILERS AHEAD.

The five-episode miniseries begins with a flashforward in which Andy is stuck in the middle of a desert during a storm. The narrative then shifts two days back, and we see the Yeats family celebrating Sam’s birthday at a restaurant. As they reach home, Andy is approached by people from his work, Luzrah Oil & Energy, telling him about a developing catastrophe. With Sam’s surgery only days away, his decision to leave predictably causes friction between him and Elena. It is also heavily implied that Andy and Elena are having marital trouble for a while. Elena was previously employed, but she has devoted herself to caring for her son for the last few years. Meanwhile, ironically, Laura is an environmental activist, so her relationship with her Petro-Chemist father isn’t ideal either.

Once Andy is in the Middle East, he is introduced to Mika Bakhash (Amber Rose Revah), a British government representative. Andy wonders aloud why she is there as they head toward the oil fields as a storm starts to brew. After collecting samples, Andy, Mika, and their security detail drive toward the laboratory. This is when they are attacked while a storm rages around them, and Andy finds out that Mika is British Intelligence.

After depositing samples, Andy goes to the hotel and continues to try calling his family, but none of those calls goes through. When he returns to the laboratory, he discovers that most employees there have been gunned down. He goes on the run and is found by Mika. It is revealed that she now suspects him. He convinces her to give him her satellite phone, so he can speak to his family. He once more fails to contact Elena but does get through to Laura and tells her to find a file in his office, take photos of its content, and then e-mail them. What Laura doesn’t tell him is that she is in considerable danger herself. 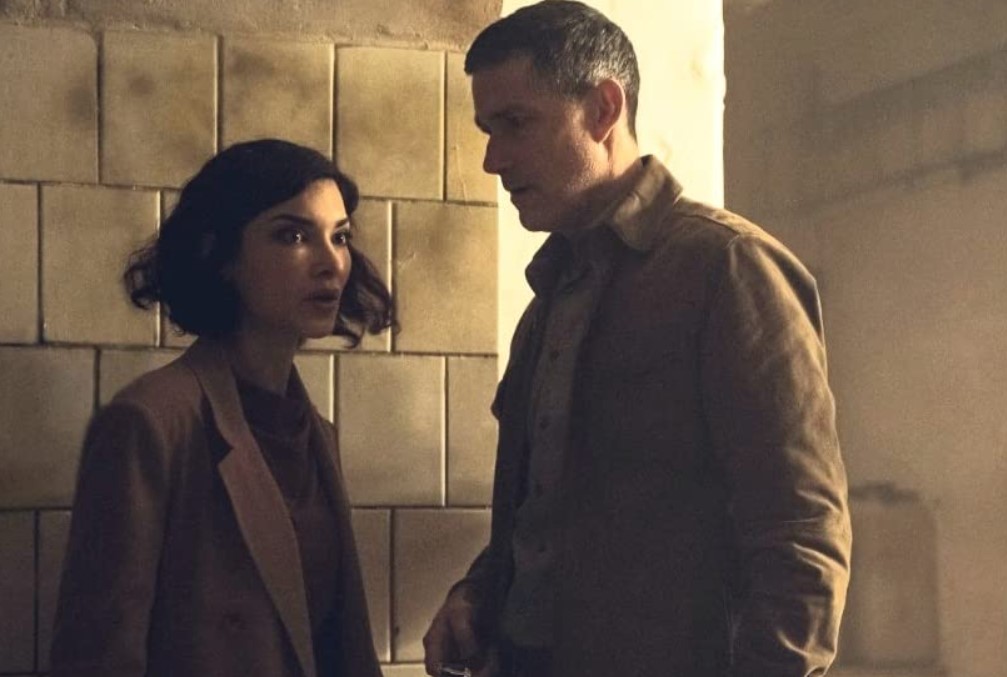 In London, Laura grows close to Owen Jones (Victor Alli), a self-proclaimed computer nerd with questionable social skills. She discovers that a man with dreadlocks is after her. While they try to escape, the man shoots Owen, prompting Laura to take him to the hospital. It is there that she receives the call from her father.

Meanwhile, as electricity starts to shut down across Europe, cars stop working, and planes drop off the sky, people begin to realize that something is definitely wrong with the fuel. Sam’s surgery is postponed indefinitely, so Elena decides to return to London with her son. However, she soon discovers that all flights have been canceled. With the help of her son’s doctor, she reaches the border, but the doctor is killed after a car hits him. An immigrant woman subsequently helps Laura and Sam to reach England, where they are detained despite being British citizens.

Meanwhile, after Andy lands in England, Mika and her superiors have him arrested, suspecting his involvement in the global catastrophe. In the season finale, following the revelation of the real mastermind, his reunion with Elena and Sam, and the presumption that his daughter has been kidnapped, Andy races against time to save Laura and human civilization as we know it.

After returning to the UK, Andy is taken into custody by British Intelligence. It is revealed that the file he earlier told Laura to take photos of and e-mail is directly connected to what is happening in the world. Twenty-five years ago, Andy and his friend, Tobias Heller, wrote a thesis on how to deal with the environmental crisis and climate change. They developed a bacteria that can eat oil. But then, Andy met Elena, got married, and started to raise a family. This made him brutally pragmatic about the world around him, and he subsequently became part of the machinery that he had desperately loathed. In the ensuing years, he worked as a Petro-chemist for some of the biggest oil and energy companies in the world, with Luzrah being the latest.

Tobias, who is now part of the British government under the alias Karl Bergmann (Tom Wlaschiha), is the mastermind behind Apocalypse Watch, the eco-terrorist group that spreads the virus across nations, causing the oil disaster and deaths of thousands. ‘Last Light’ tries to deconstruct the radical approach to environmentalism. While it accepts that something must be done to course-correct humanity’s current march towards doom, it also earnestly depicts the possible tragic ramifications of such actions.

Why Does Tobias/Karl Kidnap Laura?

Although it seems by the end of episode four that Tobias has kidnapped Laura to lure Andy into his trap, it is soon revealed that she is a willing participant. Laura’s environmentalism directly contradicts her father’s work, and they both are aware of it. She is surprised — and to a degree, horrified — that her father used to be a radical environmentalist in his youth. During their confrontation, Tobias forces Andy to remember who he used to be. When Andy tries to admit that he indeed betrayed Tobias, the latter corrects him by saying he betrayed himself.

However, despite their ideological differences, Laura realizes her father is right about the deaths of thousands and helps him with Tobias. She and Andy try to escape just as Tobias tells his people to find them. Fortunately for Andy and Laura, the government forces arrive right then.

Why Does Tobias/Karl Die by Suicide?

In the climactic scene of ‘Last Light,’ Tobias and Andy fight. When the British special forces arrive, Tobias kills himself, but not before reminding Andy to do his part. Although Andy has developed a virus that can kill the bacteria, it is not delivered in time to save oil because Tobias knowingly kept him engaged. The clock runs out, and the apocalypse begins. 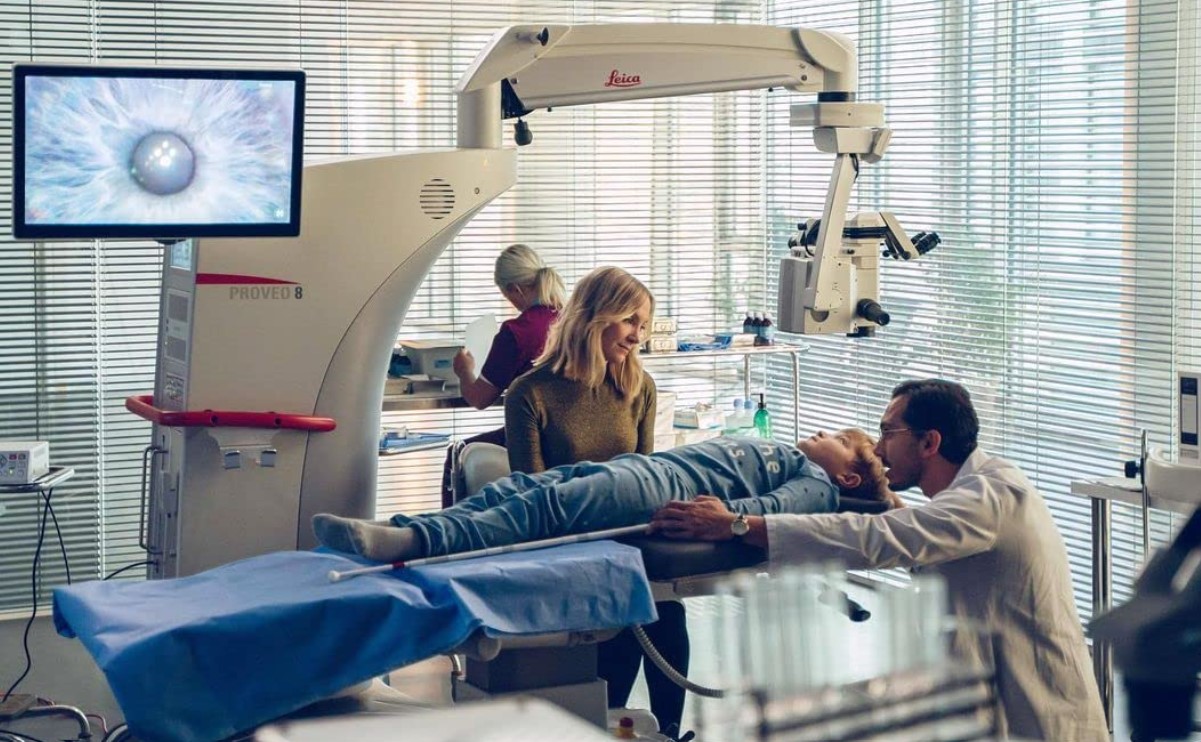 However, humanity perseveres. With his death, Tobias paints himself as the villain and Andy as the hero. And the world looks to the latter for the answers. And just as Tobias hoped, Andy and the rest of humanity rise up together. Humanity becomes more social, with people helping each other through trying times. Innovations that haven’t even been thought of before take place because there is suddenly a need for them. In the absence of oil, the world has no other choice but to look for alternative sources of energy, and nature starts to heal.

In the personal life of the Yeats family, healing happens as well. The relationship between Andy and Elena improves in the post-apocalyptic utopian world, as does the one between Laura and Andy. Sam’s surgery finally takes place, and he can see now. The world is greener, healthier, and happier.

Read More: Is Last Light Based on a True Story?