Last One Standing Ending, Explained: Who is the Winner? Who is Bahamut? 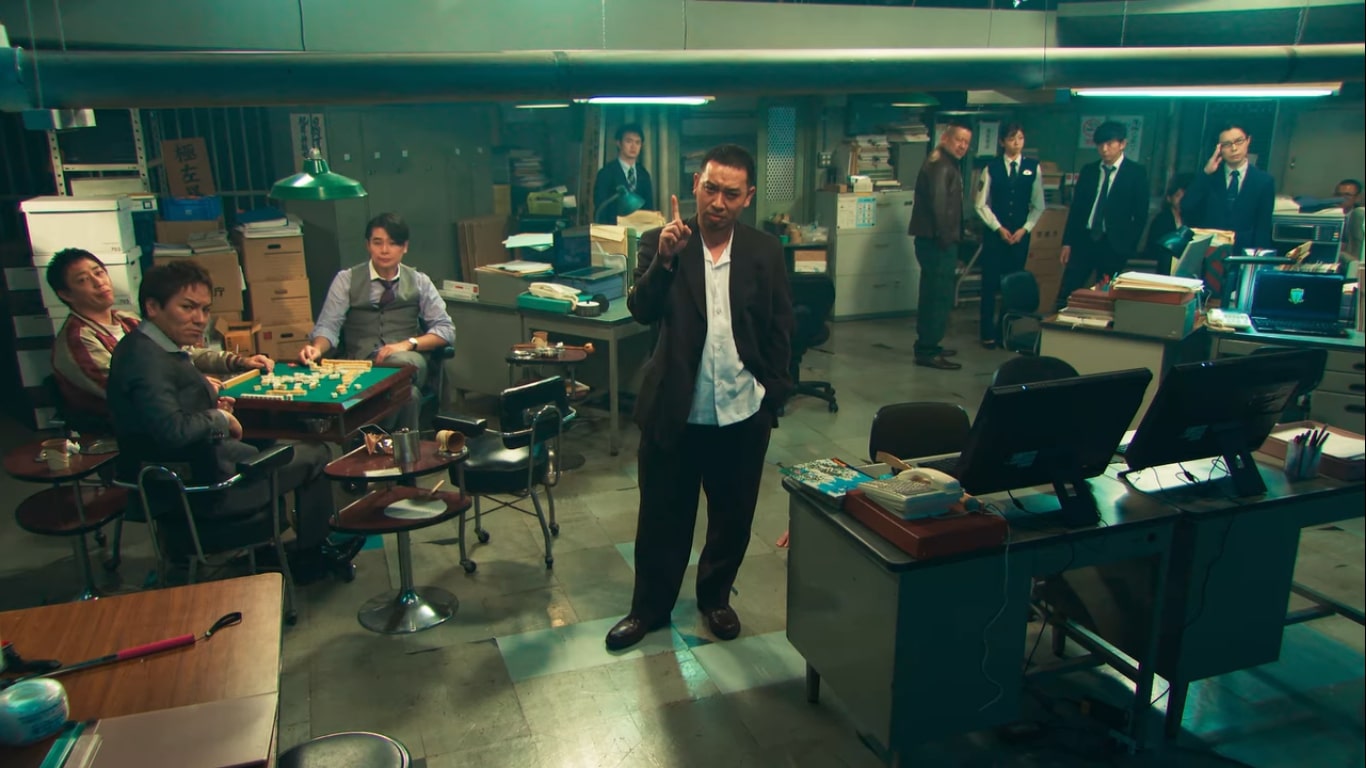 Created and produced by Nobu Chidori, ‘Last One Standing’ is a mind-boggling genre mash-up with reality TV, detective shows, and science fiction traces. A time loop of twenty years, an undercover agent at school, a person who wants to create the country from scratch, an elaborate cover-up involving memory-erasing coffee, and a time-bending alien trying to make a species of Neo Sapiens – what? The show is a literal overload with a stellar cast ensemble comprising known faces from the Japanese stand-up comedy industry.

At first glance, the show is just a bunch of comedians presenting their sketches in the guise of a ragtag story. On second thought, the show is about laughing through your woes and doing the best you can for the day. Comedies are scary, as the veteran Watanabe san says in the seventh episode. And with everyone chiming in with embarrassing stories, the show becomes a charming concoction. If you wonder what happens in the finality of events and who becomes the titular ‘Last One Standing,’ let us sort you out. SPOILERS AHEAD.

The first episode demonstrates the tenor. Named ‘So We Meet Again,’ the show begins with a literal bang. The show is for Netflix, and it meets all the criteria — suspense, a mind-boggling story, innovation in storytelling, scandals, time loops, dual identities, and people in a school. Daigo rescues Mamiya from a bunch of thugs, almost like One Punch Man. Gekidan Hitori passes a snarky comment about Daigo. They enter the classroom, and the students (veteran comedians and an idol from the Japanese industry) comprise Tanaka, Minegishi, Daigo, Itakura, Hitori, Mamiya, Tsukaji, and Iio. Their rogue teacher, Mr. Iwata, enters with a baseball bat.

For reasons revealed later in the series, Daigo thinks they are 17-years-old. In the first round, they have to tell a story about the time they were hurt. Mr. Iwata tells the group that someone has stolen a valuable painting from the principal’s office, and someone from the group did it. Mamiya has appeared on the surveillance footage, and he acts like a real tragic hero. Mamiya thinks only he is hurt, which calls for a second round. Meanwhile, Ms. Yamazaki arrives with pertinent news – it was Itakura and not Mamiya who stole the painting. Itakura leaves the show, ending up dead with Mr. Iwata. But it was Mamiya who stole the picture, later burning it.

Apparently, Mamiya and Yamazaki are in league to actualize a damning plot, which somehow involves Mamiya creating the country afresh. Meanwhile, Gekidan and Daigo both hit on Hikaru Takahashi. When Gekidan kisses Hikaru, she wants to know all their secrets, leading us to the second episode’s first round. Body image issues come out in the open, and Tanaka has a story about his weak anus muscles.

In the second round, they have to make a rule for the Private School of Hell, where all unruly students go. Hikaru wants to know a legendary teacher quote that made all the students cry in the following topic. Minegishi leaves after getting a call from the hospital about her parents’ accident. Minegishi dies in a similar car accident and leaves the show in an ironic turn of events.

In the third episode, tension arises with Hikaru attempting suicide and the school going on a riot mode. Mamiya’s plan reaches fulfillment when Hikaru releases a scandalous video about students doing drugs at school. In the first round, they have to make Hikaru laugh, and in the second, they have to deter the thugs from wreaking the school (or what’s left of it). Tanaka’s story about being Shinichi Mori’s manager and Iio’s story about the fish paste is also not inspiring. However, he pulls off a great impersonation of a beetle.

Daigo gets on a police car, and he seems to be an undercover cop dealing with the school case. The fourth episode, ‘Restart,’ literally revamps the story since veteran comedians as school children do not amount to epicness. There is a murder, following which Kubota and Higashide have a covert conversation. After a three-month time leap, Higashide has left the police, which coincides with the arrival of a rookie in the Special Investigation Team, unit II (SIT II for short). Daigo enters back in the story while a random person flies through the air and into a cardboard box. Then we meet the unit’s members: Morita, Kubota, Yoshimura, Eiko Kano, Yuki Iwai, Koba, and Mukai “Panther.” They are gambling with Mah Jong, and the rookie cannot stand corruption.

A criminal is about to blow up the precinct, and they have to talk about the time they were hurt to console the man. Yoshimura is the first to go in the police department arc. In the following episode, we see a lot of up-and-coming comedians, while Watanabe and Mika Ahn tags along with the rookies. However, the seniors are not impressed. Thus only Watanabe and Hiccorohee move on to the next round. The story further escalates while the plot deepens. In a flashback, we see that the students have been subjected to taste the coffee brand Tumaha8, causing their memory loss. The up-and-coming comedians die from a simultaneous computer blast, and there is a killer virus on the rise.

The virus has something to do with the quasi-mythical omnipresence of Bahamut. Toshiaki Kasuga, apparently CIA, comes on board. Mamiya has planted a bomb in an observatory, and Higashide is trapped inside (remember the policeman who left the job?). They must confuse the AI that controls the bomb by teaching it something incomprehensible. Then, they have to say something foolish, and at the end of the episode, Koba and Yoshimura face elimination. The seventh episode reveals that the memory loss coffee has penetrated the police precinct too, thanks to Kubota, who is in league with a mafia gang. The eighth episode finally lifts the curtain from the confusion, and we get a winner.

Last One Standing Season 1 Ending: What Is The Story? Who Is Bahamut?

While the story is not the show’s main focus, it always remains interesting. From school to police precinct to mafia headquarters to an observatory, the tale moves freely, picking up random pop culture tropes in the way. Bahamut is the source of the problem. He is, it seems, a mythical figure who plays with time at will. He has forced the actors into a loop through his injections, seeking to make a new race of humans altogether — “Neo Sapiens.” Mamiya turns out to be a savior rather than a villain who attempted to end the loop. According to Daigo, the chosen actors are the storytellers of the Akashic Records of the human race.

The stories prove themselves that the stars have not forgotten their entire past. After some theatrics, Gekidan Hitori reveals the face of Bahamut, and it has uncanny resemblances to Nobu Chidori. The commentator and producer is the evil quasi-mythical figure, the actors deduce. It makes sense since the producer watches them performing from above. He has also kept them stuck in a time loop by typecasting them and making them play the roles repeatedly. And from season to season, the producers bend the time at their will. Thus, we can be sure that Nobu is Bahamut, although he does not understand how he becomes Bahamut.

Does The Riot Subside? Who Is The Winner?

In finality, a riot erupts on the streets, with the corruption within the police coming to the foreground. The heroes have to present an inspirational message before the country’s people. Whether Tsukaji’s story about his father naming him Muga is inspirational is debatable. However, Hitori’s story about his girl has an element of endearment. Daigo’s one-liners are also on point, but they cannot beat the trash series by Mukai.

Then, he hits the ball out of the park with the speech he recorded for Yoshimoto, which is brief and precise — “Let’s do our best today.” The punchline sounds even better the next time he says it, and with the consent of the country’s populace, Mukai wins the game. The riot subsides, while the ambiguous mention of “Daffunda” (who knows what that is) leaves us rooting for a second season.