Lisa Ebberson My 600-lb Life Update: Where is She Now?

TLC’s ‘My 600-lb Life’ chronicles the journey and challenges of morbidly obese persons striving to shed their extra pounds — around 600 lbs — to live a healthy life. Every unique patient and their experiences as a result of their interactions has made the series amass a considerable fan base. In their journey, they receive guidance from Dr. Younan Nowzaradan, AKA Dr. Now, who provides a personalized diet and exercise regimen to help patients lose weight. Once approved, the patients can undergo weight-loss surgery.

Since its debut in 2012, the reality series has seen many individuals seek Dr. Now’s advice on how to lose weight to lead a healthy life. Viewers learn about the unexpected and intriguing experiences of people who participate in the weight reduction show from all walks of life. Lisa Ebberson, from season 10 episode 14, was one such cast member with a complicated journey, thus, making viewers wonder where she is now. If you’re eager to know about the same, here’s what we found out!

Fairbury, Nebraska native Lisa Ebberson appeared in season 10 as a woman dependent on her boyfriend of 10 years, Randy. Weighing around 637 pounds, Lisa was not only stuck in bed for over three years but also became weak to the point where doctors feared Lisa could break a bone if she tried walking. Randy was the one to bathe, cook meals, and even clean her up if she wet her bed. Although he was her primary caregiver, he also acted as her enabler since he bought and cooked unhealthy meals for her. Randy also had his own set of health issues, as he needed an oxygen tank for support. 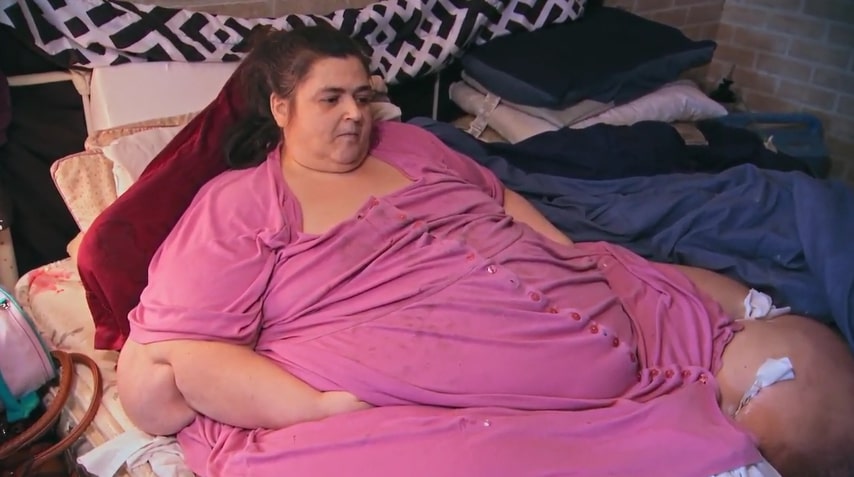 Lisa recounted the root cause of her food addiction, talking about her childhood traumas from being raised in an unhealthy environment. Her entire family was relatively big, including her, which was not given much attention or thought as a concern. This is because they had bigger concerns regarding the father. As per Lisa, although her father was a good man, he fell into alcoholism and began abusing their mother. He ultimately left the family, leaving the mother to work full-time to provide for them. Lisa and her sisters, thus, had to look after themselves from a young age, mostly resorting to quick junk foods.

However, the incident that pushed Lisa towards binge eating throughout her life was when she was raped by two guys at the age of 13. Being disturbed for life, Lisa decided to eat so much that she becomes unappealing to men and escape any unconsented advances. But this binge eating escalated out of control over time as she faced more challenges with her failed relationships and teen pregnancy. After meeting Randy, Lisa became dependent on him and kept eating more and more, with her health deteriorating till she couldn’t get out of bed.

Thus, feeling guilty about not being able to help Randy, 62, and losing any future with her grandchildren, Lisa, 51, approached Dr. Now for professional help. In the beginning, she seemed very determined to actively make the dietary changes in her everyday life and even took responsibility for her excessive weight gain. However, when it came to leaving her old eating habits and sticking to the recommended meal list, Lisa quickly faltered and enabled Randy to arrange unhealthy foods for her. She again went against her words when she remained out of contact with Dr. Now for months and argued with both the therapist and nutritionist the doctor sent her way.

Where is Lisa Ebberson Today?

Lisa was reportedly one of the most uncooperative and unwilling cast members of the show, who constantly argued and seemingly manipulated the specialists who tried to help her. Trying to be defensive of her eating habits when asked about it, she did not make any changes to her food addiction. Lisa was even unresponsive towards Randy’s health concerns when he complained about his chest and arm pain and wanted to go to the hospital. She remained in the weight loss program without consulting Dr. Now for over four months until a medical emergency came her way.

During the COVID-19 pandemic, both Lisa and Randy contracted the virus and had to be admitted to the hospital because of health complications. Eventually, Randy sadly succumbed to the harsh infection; thus, Lisa’s journey took a tragic turn. This crushing loss took a significant toll on her, and she had to be under medical care after losing her primary caretaker. This came as a wake-up call for Lisa as she got back in touch with Dr. Now. In due course, she lost 83 pounds under the supervision of medical staff.

However, unable to cope with the strict guidelines of the hospital, Lisa ultimately quit the program after a few weeks. She even spoke with a psychotherapist about Randy and the huge loss in her life, but it all went in vain as she also cut off Dr. Now completely and went out of contact. Now, although she shares pictures of her grandchildren on her social media profiles, she has remained tight-lipped about the status of her weight loss journey.

Reportedly, Lisa went back to her home in Fairbury, Nebraska, and now lives with her family in Lincoln, Nebraska. She often shares that she misses Randy a lot and fights a “silent battle” of living without him every day. Lissa Barnett Ebberson remains quite active on Facebook sharing food recipes, DIY tips, and home organization videos but does not share anything about her personal life. Thus, we only wish her the best for everything she desires in life.

Read More: Angela Johns My 600-lb Life Update: Where is She Now?