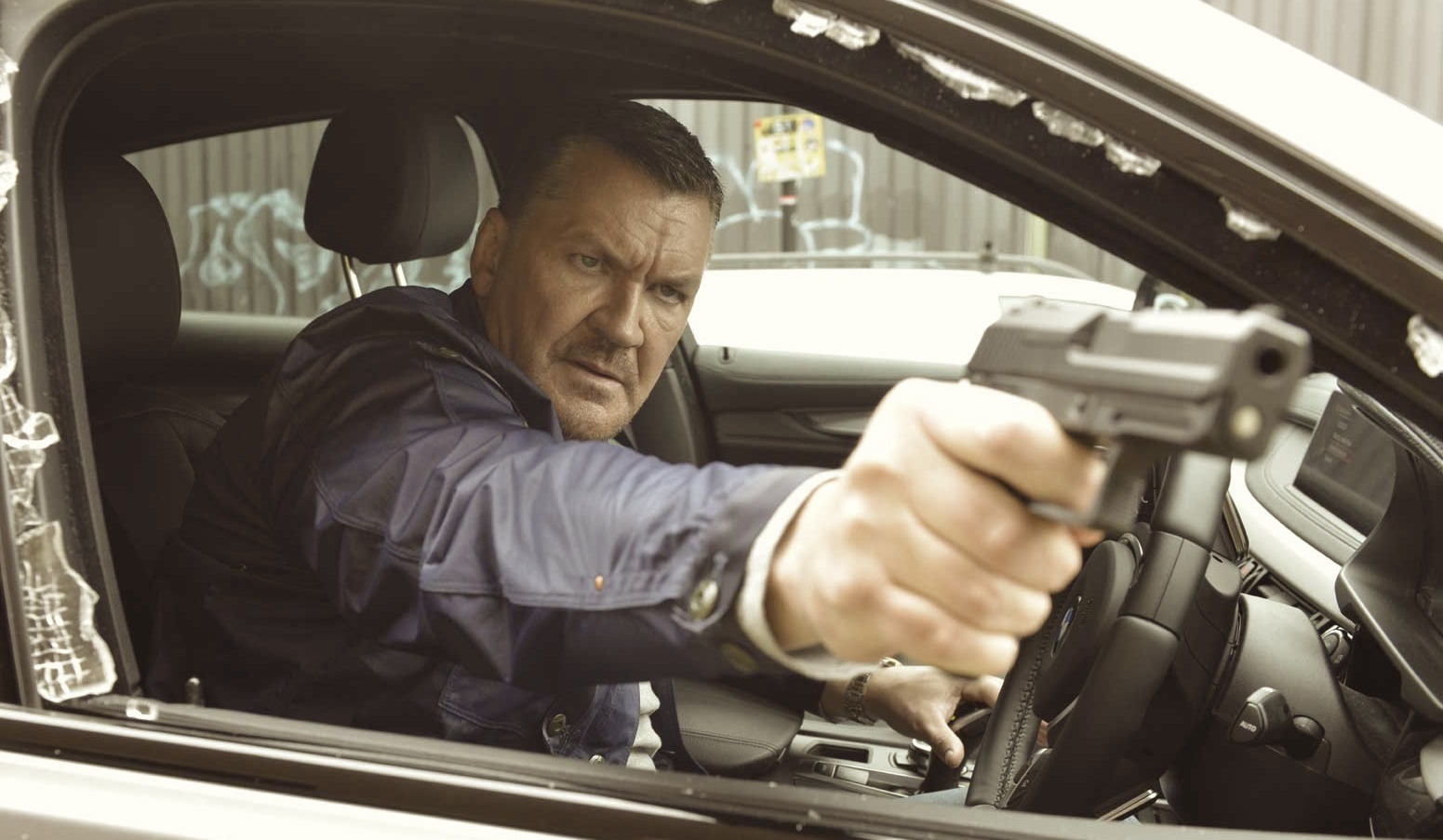 British action films tend to have a no-nonsense, rugged quality to them as the filmmakers over there consciously focus on storytelling and pace over extravagant showpieces. Craig Fairbrass (‘Villain’) co-writes, co-executive produces, and stars in the sensational crime drama ‘London Heist’ (2017) (original title: ‘Gunned Down’), a film about career criminals, revenge, and sordid family affairs. After his father is brutally murdered, bank robber Jack Cregan (Fairbrass) sets out to hunt down those responsible but soon discovers that his family has been hiding a terrible secret. Now, Jack must choose whether he wants to continue on his path of vengeance or give up and get away from his criminal life with his wife Nicole (Nathalie Cox). SPOILERS AHEAD.

Jack is a sleek, experienced career criminal who leads an extremely efficient team that has committed four successful robberies in the last five years. Their modus operandi is so immaculate that they don’t leave any clues or witnesses behind. This has been a long source of frustration for the authorities, especially DCI Wickstead (Nick Moran), who has tried to arrest Jack’s father Alfie (Steven Berkoff) for several years but has failed. 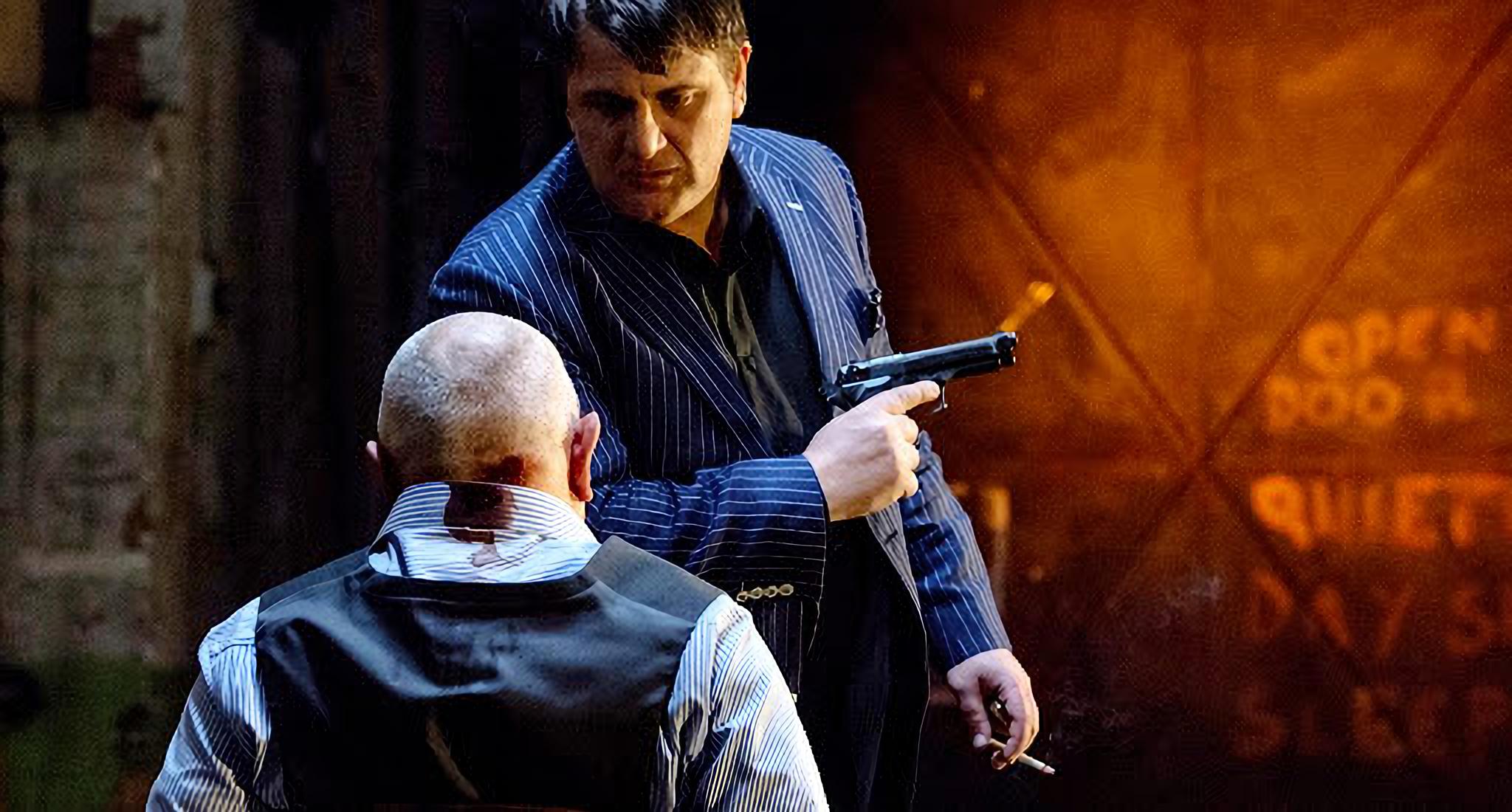 He is now desperate to apprehend the son at any cost. When Alfie is murdered, and the money from the team’s latest job is stolen, Jack’s three accomplices, Eddie (Eddie Webber), Frank (Tony Denham), and Sammy (Roland Manookian), caution him against hasty actions, knowing that they have done business with all kinds of people. The killer could be any one of them.

Unfortunately, Jack stirs up a hornet’s nest when he visits a local club, run by the notorious mobster Lenny (Mem Ferda), for information on his father’s death. It was Lenny who killed Alfie and subsequently orders a hit on Jack. After neutralizing the first two assassins that come for him, a desperate Jack reaches out to Raymond “Ray” Dixon (James Cosmo), the kingpin running the entire operation from his home in Marbella, Spain. Jack leaves Nicole with Ray and heads back to London to do one last job for the exiled crime lord. Unbeknownst to Jack, Ray has contacted Wickstead and agreed to serve Jack and his team on a platter.

Directed by Mark McQueen (‘Devil’s Playground’), ‘London Heist’ doesn’t have a single excessive scene. Alfie’s vicious death is juxtaposed with Ray and his team celebrating their latest job at Lenny’s club with booze and exotic dancers. The film shifts back and forth between the two sequences, enunciating the connection between sex and violence. Later, Jack finds his father’s phone and discovers that the last two people that Alfie had called were Lenny and Holly (Katie Clarkson-Hill). 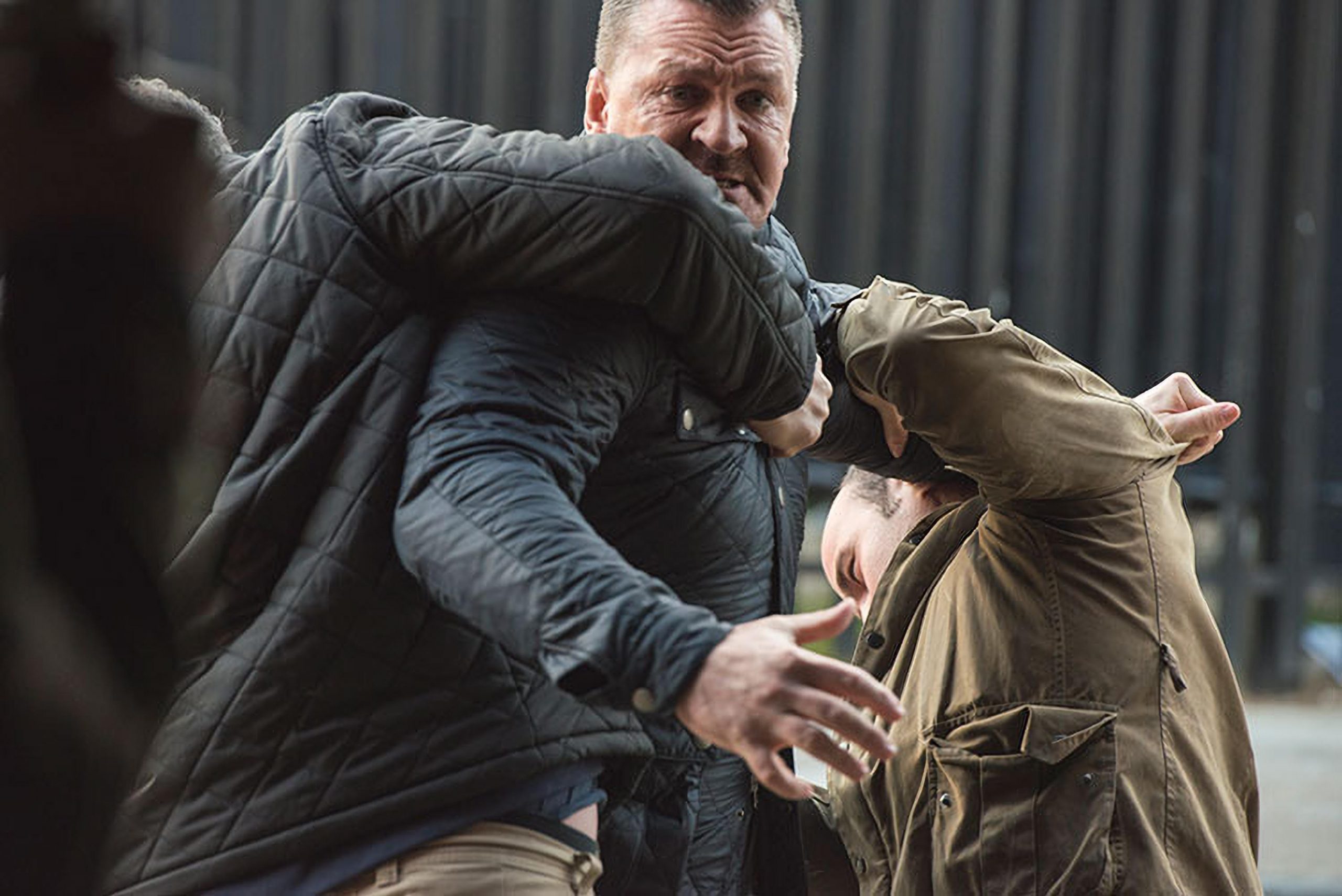 The latter is the granddaughter of a past friend of both Alfie and Ray. As Jack begins to search for Holly, he learns from an acquaintance that Lenny ordered him to be kept at the club, no matter what, on the night of his father’s death. Realizing the implication, he goes to confront Lenny. It is then that the two assassins nearly kill him. When he comes back to the UK to perform one final robbery for Ray at the main foreign currency depot in Canary Wharf, he and his team discover that Wickstead and other police officers are waiting for them. In the ensuing gunfight, Frank and Sammy are killed, and Eddie is arrested.

As the authorities start to close in on him, Jack still can’t figure out what had happened. He calls the only person who might have some answers: Holly. The last time they spoke over the phone, she told him that she knew why Alfie was murdered, and it wasn’t for money. When they finally meet, Jack learns that he was conceived after Ray raped his mother. Alfie initially didn’t know about it, but Holly’s grandmother, who lost her husband and son to Ray, ensured that he found out. She knew because she was Ray’s mother’s best friend and the only person to whom the other woman told her devastating secret.

It was Holly’s grandmother’s dying wish to have Ray pay for his sins, so Holly told Alfie, who subsequently ordered a paternity test for Jack. After discovering he wasn’t Jack’s father, Alfie realized what Holly was saying was true. His temperament was very similar to that of Jack’s. He immediately went to Spain to kill Ray. However, he failed, and following his return to London, Ray sent Lenny and his men to kill him.

After Jack is told that he is the product of a rape, he doesn’t believe Holly. It is only when she gives him the paternity test results that everything becomes horrifyingly and tragically true. Alfie and Ray have grown up together. In his mind, he has always thought that they were closer than most biological siblings. It takes Jack a while to shed the last vestiges of denial and confront the truth.

Jack then embarks on a warpath, killing Lenny and his henchmen and retrieving the money they took when they murdered Alfie. He gets a former business associate to rent him his plane to fly him back to Spain. Now deeply worried about Nicole and the fact that he has left her with the mastermind behind all his miseries, he warns his wife about Ray. She tries to leave the villa unnoticed but is captured and sent back to her room. 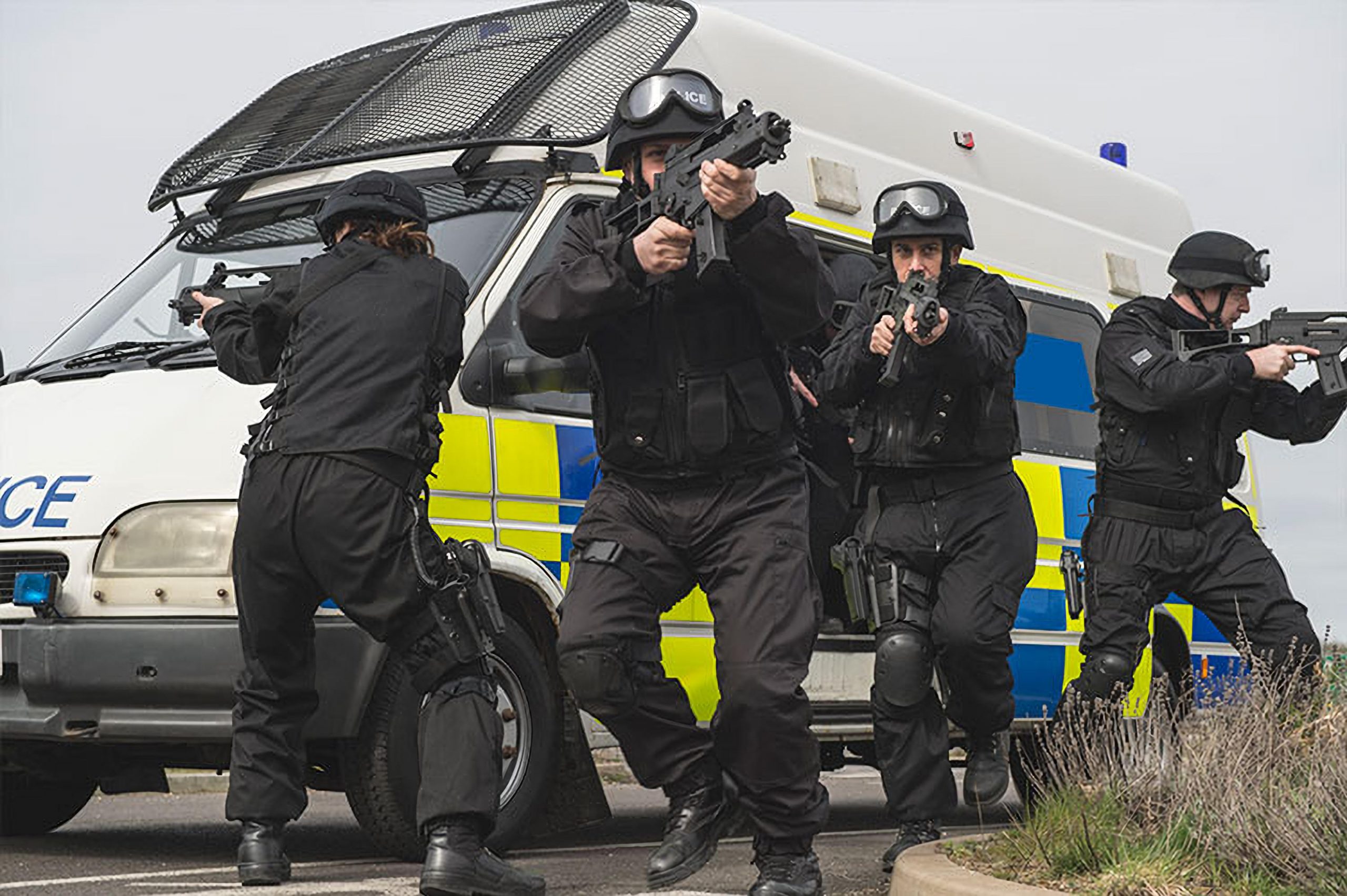 When Jack arrives, Ray is confident that the younger man will not shoot his biological father and lowers his gun. This turns out to be a fatal mistake. For all his life, Jack has considered Alfie as his father. A few lines on a paper can never change that. Ray raped his mother and killed his father, and the only absolution Jack can offer a man like that is death. So, he kills Ray and leaves the villa with Nicole.

Before they can drive into the sunrise, Jack realizes a harsh reality about his criminal life: he doesn’t have almost anything to show for it. Disregarding Nicole’s pleas to just leave, he goes to the bank where Ray kept his money in a secured locker. Wickstead shows up there. It turns out that Ray was very much willing to give Jack up in return for not being extradited, and Wickstead, who had been hounding the Cregan family for years, accepted Ray’s proposal.

However, Ray didn’t want to get Jack killed, as he knew that he was the younger man’s biological father. But during the shootout in which Frank and Sammy were killed, several officers were shot as well. This prompts Wickstead to ignore his deal with Ray, and he seeks to punish Jack. After Wickstead shoots Jack in the leg, they begin wrestling for the gun. Although Wickstead manages to shoot Jack in the abdomen, the latter stabs him to death. As the police arrive, Jack manages to leave, steals a car, and gets to the beach. As the morning sun lights up the sky, Jack sits facing the ocean, clutching the bag of money.

The film ends there, leaving Jack’s fate unclear and ambiguous. He is bleeding profusely from the bullet wound, and the authorities are nowhere in sight. He will likely die on that beach there. It’s a violent end to a violent life. It is also profoundly lonely and serene. Earlier in the film, Jack and Ray talk about life after crime while watching the sunrise together from the latter’s villa. Jack doesn’t get a happy ending with Nicole, but he does get that sunrise on the last day of his life.

As for Nicole, she is forced to leave the bank’s vicinity when the police arrive. She was a reluctant enabler to Jack’s crimes. Now, she doesn’t have Jack, nor does she have any money. Jack used the cash he took from Lenny’s club to charter the plane to Spain. But, finally, after a long time, she has some peace. Jack’s death might serve as a blessing in disguise for her. Unlike her husband, she now has a clear path to a normal life.