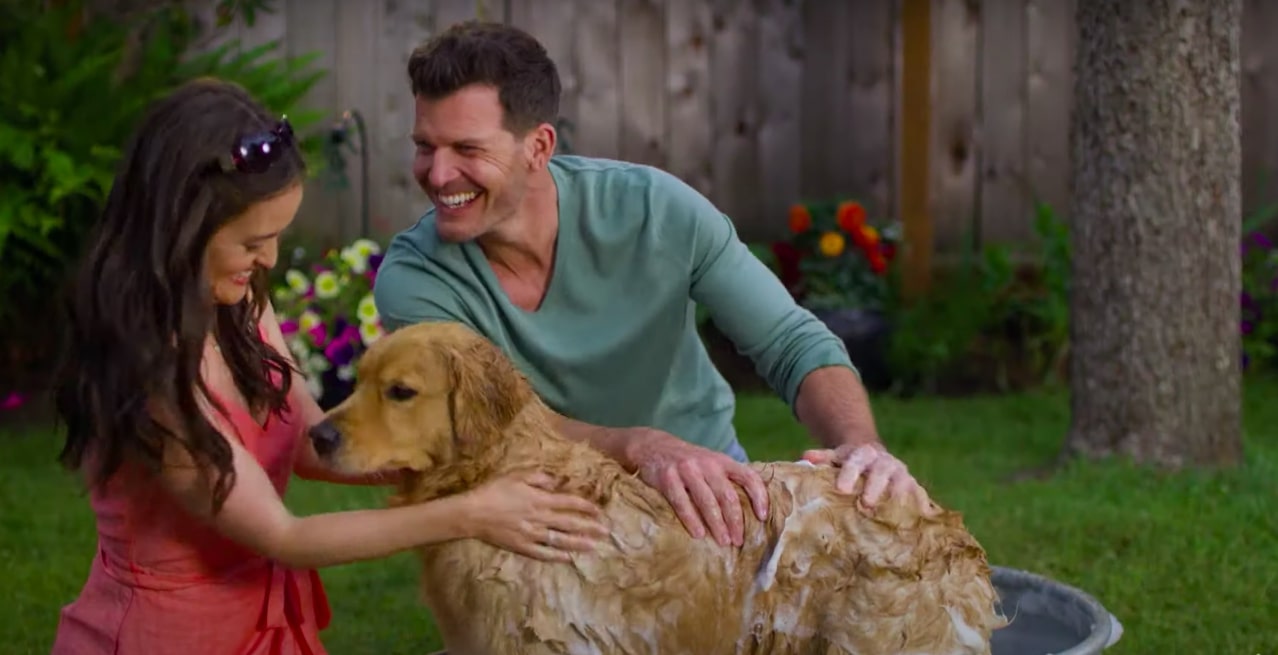 ‘Love and Sunshine’ starts with Ally, who is a florist. After a recent break up with her fiancé, she is able to recover from the emotional rollercoaster with the help of Sunshine, a former military dog. However, she is the foster caregiver of the dog and soon, the real owner of the dog soon meets her to take Sunshine back. Jake, who has just returned from a military assignment, has some hard and fast rules when it comes to staying happy.

Even though Ally and Jake’s relationship starts off as friendship along with Sunshine, it ever so slowly transforms into a love story. The Hallmark film has its characteristic elements through the abundant screen time given to the dog, who too, has a major role to play.

The film is quite focused on simple emotions that slowly transform into profound ones. Like many other Hallmark films, it extensively uses quite a few locations across Canada.

The filming of the movie, which started in May 2019, uses the scenic vistas of Vancouver Island. Ellie Kanner, director of the film, said, “I love the proximity. It doesn’t take an hour to get to set, it takes 10 minutes and the locations we’ve found were amazing.” The film was also shot in several spots in Victoria, British Columbia. Some of these places include Beaver Lake and Victoria International Airport.

Danica McKeller plays the role of Ally. McKeller is a successful actress and has featured in ‘The West Wing,’ ‘Dancing with the Stars,’ ‘Crown for Christmas,’ ‘Wedding Bells,’ ‘Campfire Kiss,’ and ‘My Christmas Dream,’ along with other works. Talking about ‘Love and Sunshine’ in an interview, she said “I love movies where the leads don’t get along at first and there are sparks and friction…All of that works great and I’m sure I’ll do it again, but the interesting thing about this one is that was never a factor…When I first read this, I was crying!  I knew it was Hallmark and would turn out great, but I still went on that ride and cried like five times reading it – -you will have to keep the tissues at hand.” Thus, it seems like playing the role of Ally in the film was quite the experience for McKeller.

The character of Jake is played by Mark Deklin. He has previously starred in ‘Riverworld,’ ‘Desperate Housewives,’ ‘Big Love,’ ‘Nip/Tuck,’ ‘The Ex List,’ ‘Sex & the City,’ and ‘The Wish List,’ among several other works. One look at his Instagram account and it is evident that he had a great time with the filming of ‘Love and Sunshine.’

The obvious yet important character in the film is that of Sunshine, the dog who brings both Ally and Jake together. The role is played by both Sawyer and Briar, who look alike.

The two dogs seemed to have been a source of joy for the cast and crew members in the film as they were constantly mentioned in their social media pages during the time of the shooting. Other cast members include Emma Craig, Ben Morgan, Sam Terry, Margo Terry, and several others.