Love is Blind Season 1: Where Are They Now? Who Are Still Together?

‘Love is Blind’ manages to steer away from the crowd of other dating reality shows through its innovative idea of letting singles get acquainted with each other without knowing about their physical appearances. The couples who end up developing feelings and decide to get engaged are allowed to meet face to face, after which they spend time at a couple’s resort and settle down into everyday life.

Only at the end does each contestant choose whether they wish to stay with each other or break up; thus, answering the question of whether love is really blind. As with most reality show stars, fans have been extra curious to know which of the season 1 couples are still together. Well, let’s take a closer look, shall we?

Lauren and Cameron seemed to ignite a spark during their very first conversation, and viewers were quite surprised at the incredible connection they seemed to have even without meeting each other. Within the first three days, the two discussed everything they needed to know and even exchanged their “I Love Yous,” which seemed to seal the deal. Since then, it was just a matter of time before Cameron popped the question, and Lauren was only too happy to oblige.

The couple was thrilled to meet each other face-to-face for the first time, and we could clearly see their dedication through their actions. Although they faced flak for being an interracial couple, Lauren and Cameron stayed true to each other and tied the knot in November 2018. Their commitment and chemistry have undoubtedly played a part in Lauren and Cameron’s relationship as they are going strong to this day. The two also have an excellent mutual understanding and never shy away from making compromises.

Although Lauren and Cameron don’t have kids yet, the latter has left that decision entirely upon the former. In a heartwarming move, the two published their love story in the book titled ‘Leap of Faith: Finding Love The Modern Way’ and even have a YouTube channel named ‘Hanging with the Hamiltons.’ It is lovely to witness them build up a relationship based on love and trust, and we want to wish them the best for the road ahead.

Fans were quite excited to watch Giannina and Damian’s relationship develop as they appeared wholly dedicated to making it work. From showing an outstanding connection during the initial stages to falling completely in love at first sight, the couple seemed destined to last. However, things soon took an ugly turn as petty fights threatened to sour their relationship. The pair also seemed incapable of comprehending each other’s needs.

Damian grew repeatedly disillusioned about their connection and thus decided to split up on their wedding day, exclaiming, “I do not!” Surprisingly, even after splitting up on the show, the couple got back together post-filming in order to give their connection one last chance. However, with Damian seemingly getting close to ‘Too Hot To Handle’ star Francesca Farago in 2021, fans questioned his relationship with Giannina. Ultimately, in mid-2021, Giannina revealed that although the couple dated for quite some time, things did not work out, and they separated in early 2021.

Jessica was unsure of her relationship with Mark from the very beginning as she was not comfortable with their 10-year age difference. On the other hand, Mark wanted his partner to fall completely in love with him and was quite disappointed when things did not turn out that way. They squabbled their way through their time on the show and never seemed to be able to reach an understanding. Thus, it was no surprise when they broke up on their wedding day and decided to go their separate ways.

Interestingly, during the filming of the three-part ‘After the Altar’ special, Jessica accused Mark of cheating which he vehemently denied. Yet, their relationship is now a permanently closed chapter as Mark is now engaged to Aubrey Rainey, and the two are proud parents to two wonderful children. Meanwhile, Jessica is currently dating ankle and foot surgeon Dr. Benjamin McGrath, whom she refers to as her best friend.

Kelly and Kenny’s breakup came as a shock to fans as there was no discernible reason behind the separation. Right from the very beginning, the couple showed immense devotion and were really supportive of each other. They did not lose their spark even after meeting face-to-face, and their relationship seemed to grow stronger with each passing day. Considered one of the most wholesome couples in season 1, their decision to separate on their marriage day stunned many fans.

However, even after separating, the two have maintained an amicable relationship and are happy to witness each other succeed in life. Kenny, however, has found his one true love, Alexandra, and is busy planning his marriage to her. Meanwhile, Kelly seems to be currently single, living life on her own terms, and is pouring her attention into furthering her career as an entrepreneur and podcast host.

Diamond and Carlton built up quite a healthy connection initially and were looking forward to making their relationship work. However, soon the show revealed that Carlton wasn’t entirely true with his partner as he did not state that he is bisexual. This issue blew up during the trip to Playa del Carmen, Mexico, and Carlton seemed quite defensive when Diamond questioned him about it. Although there was an opportunity to talk it out, Carlton’s insulting comments about his partner did not help his case. Thus, the couple separated even before their marriage date.

Since then, Diamond and Carlton have lived very different lives, and it doesn’t look like they are in touch. While Carlton is seemingly single and working towards taking her business, The Lady Box, to greater heights, Carlton has chosen privacy regarding his personal life and is busy working as an entrepreneur. Although reports in mid-2021 claimed he was dating a man, their pictures have since been taken off social media, making Carlton’s current relationship status unclear.

Initially, Matthew was quite confused between three ladies — Amber, Jessica, and Lauren. However, he couldn’t help but notice how Amber was the one who reciprocated his attention the most. Although Matthew was a little afraid of her strong personality, the reality star knew he and Amber shared a special connection. Hence, in the end, he ended up proposing to Amber. She happily agreed, and the couple began building an ideal relationship on the foundation of trust and understanding. They did not fail to show their commitment throughout the show, and their chemistry was quite undeniable. 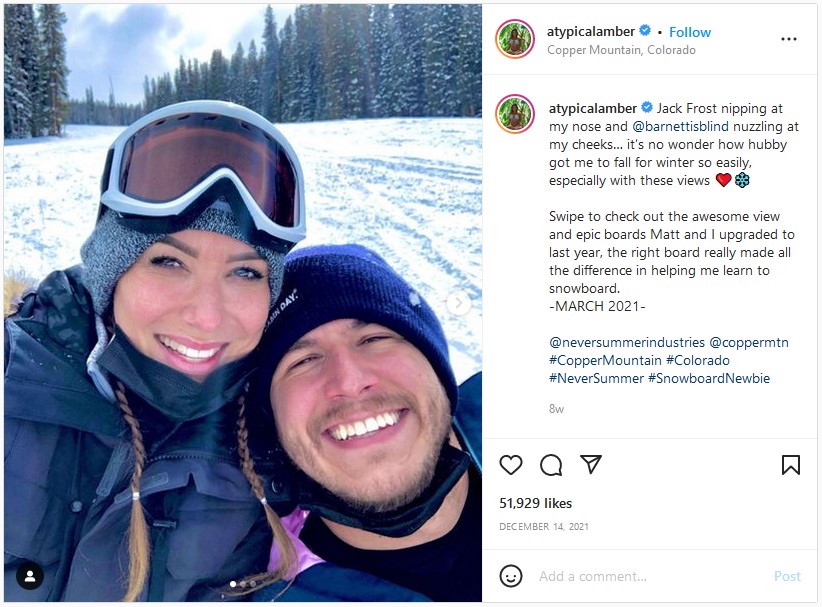 Amber and Matthew also wasted no time ironing out the issues that plagued their relationship and ultimately married in November 2018. Around that time, Amber was in a bit of financial trouble; hence, Matthew sold his house in order to pay off her debts. They even moved into a shared apartment together and found jobs — Amber as a cocktail waitress and Matthew as an Assistant Project Manager at a construction business. Their efforts to weed out the issues proved fruitful.

At present, the couple is seemingly living the best days of their lives. In mid-2021, Amber got diagnosed with epilepsy after passing out on her bathroom floor. Just like any couple who is madly in love with each other, the two took it in their stride and refused to bow down to the condition. With their love now transcending boundaries and growing stronger each day, we hope Amber and Matthew remain happy for the years to come.