Made in Abyss Map, Explained 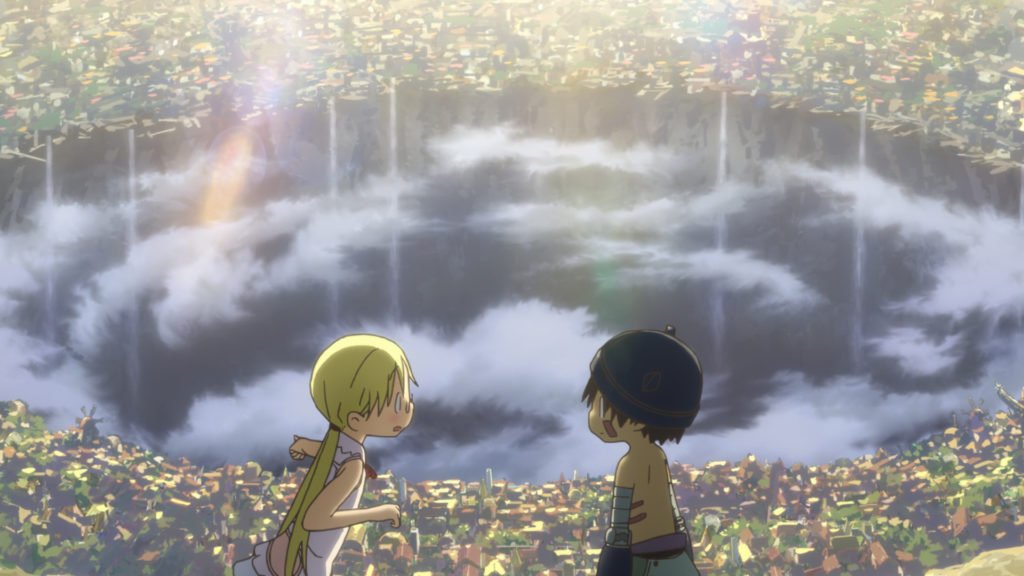 ‘Made in Abyss‘ is a unique anime that does not confine itself to anyone’s taste. With its chibi-style animation that reminds you of some of the best works of Studio Ghibli, it panels off into a wonderful fantastical tale of a very small town built around “the Abyss”. And what makes its world-building so authentic is the intricate details that lie in each of the elements. The anime’s main appeal lies in its dark themes of existentialism, which are straight off palatable for anyone who has a mild fascination for philosophy.

However, apart from that, another aspect of Akihito Tsukushi’s story that makes it so intriguing is that it actually comes with a map. Unlike the maps of other well-known fantasy tales of the West, the map of ‘Made in Abyss’ does not span across war-torn continents or fascinating empires. It, instead, meticulously explores the lore surrounding the depths of a massive crater. So we’ll be further exploring each section of its map and we’ll also discuss the respective significance of these on its overarching storyline. SPOILER AHEAD!

“Over the span of many years, with a spirit of adventure for the unknown and countless legends luring them in, the world’s only remaining unexplored chasm has swallowed up a great many people. It is known as the Abyss”

The entire world-building of ‘Made in Abyss’ revolves around a giant gaping pit that ascends tens of thousands of meters underground. The ones who live on the surface of this pit fear it, worship it, and treat it like a God. Only a few have been able to explore the depths of this pit and have returned unscathed, and it’s these people who are looked up to by the ordinary citizens of the city that is built on its surface. In the first season of the show, the main characters are able to reach the fourth layer of the pit which is about 7000-12000 meters underground. What lies below this is still a big mystery.

The pit was first discovered about 1900 years ago near the islands of the southern ocean of Beolusk. While its exact depth is unknown, its diameter is close to 1000 meters and it is supposedly the home for a very ancient eco-system. In one of the episodes of the first season, it is also mentioned that there is some sort of time distortion in the depths of the pit. Relative to the time on the surface, time apparently slows down as one dwells further into the pit. But pretty much like all the other presumptions surrounding it, this is just a mere theory.

The Town of Orth 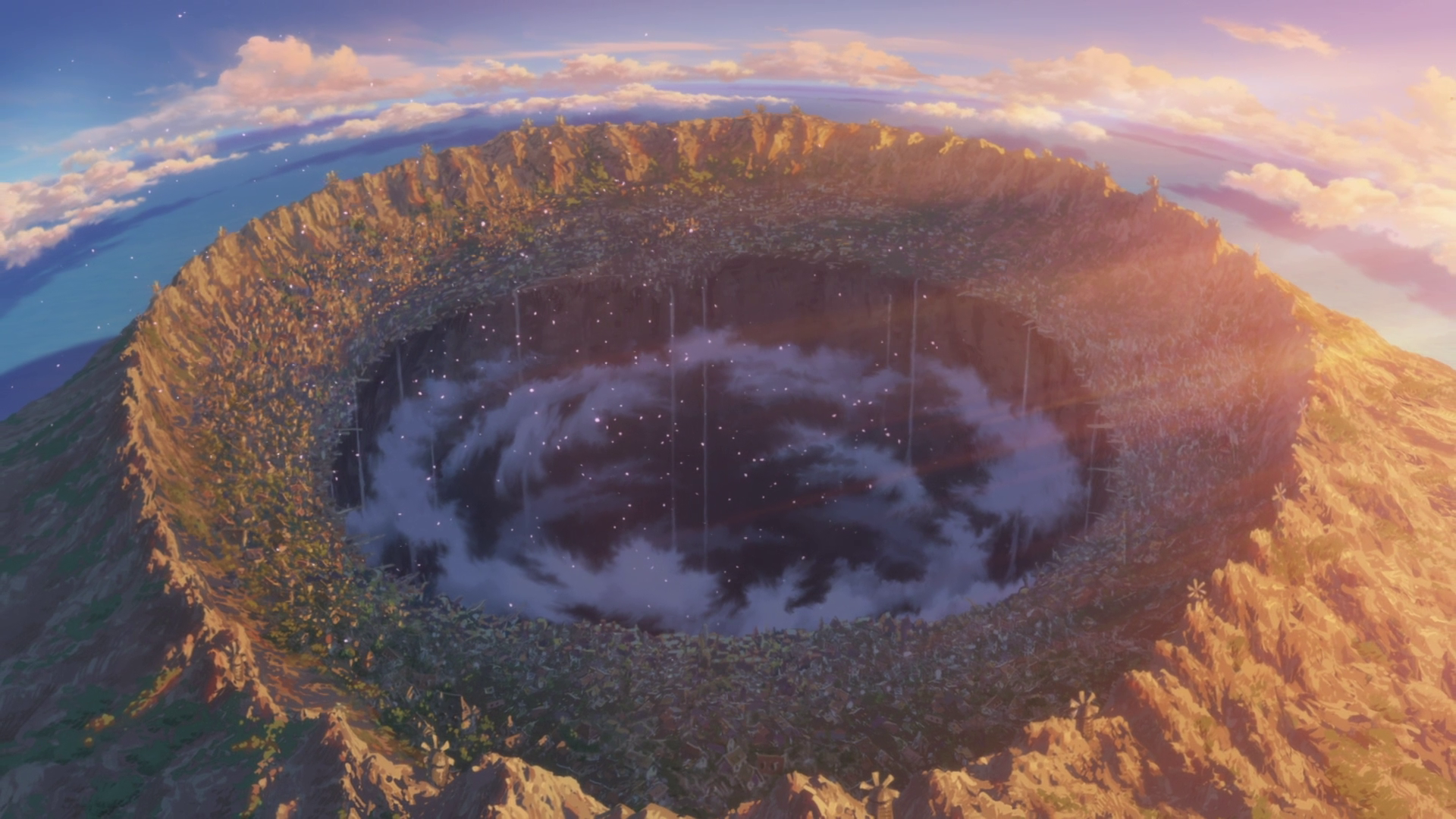 Over the years, a large town knows as Orth has developed all around the Abyss. Almost all the main characters of the anime belong to this town. The citizens of the town use a set of runes that are reminiscent of  Japanese syllabic kana alphabets. The Town is divided into 5 key districts: Central, North, West, South, and East.

Further down in the south district, The Wharf is a region that was once used by illegal delvers to explore the depths of the Abyss. Since many aspiring delvers have settled all around it, it has slightly sunken down into the Abyss and is apparently the lowest point of Orth. The other Gondola station which is legally used by some of the most renowned delvers is located in the West district. Known as the Grand Pier, it is the only other know station that often draws a lot of attention when proud teams of Delvers return from the adventures from the depths of the Abyss.

The Gate to Netherworld is another well-known landmark of the Orth which leads to a pathway that can be used as a primary route to the first level of the Abyss. It is heavily guarded at all times and no one can pass through it without proper authorization. The exact location of the Gate is unknown, but it is located either in the South or the East district and is at an anti-clockwise direction from the Belchero Orphanage.

The Delvers have a well-defined organization of their own and their head office, referred to as the Delver Guild HQ is located in the East district. The Delver Guild HQ consists of several tower-like structures and a small bridge from the main part of the district leads right to it.

First Layer: The Edge of the Abyss

Compared to all the deeper parts of the Abyss, the first layer is the only section that is considered to be relatively safe. It pans down to a depth of 1350 meters, beyond which, the second layer begins. Even the atmosphere of the first layer remains pretty much the same and is nothing more than a training ground for the inexperienced Red Whistle Delvers. The most common alien animal species found in these parts are Hammerbeak, Silkfang, Crimson Splitjaw, and Demonfish. Since this small stretch of gassy rockfaces is pretty shallow, the ones who reach this point only suffer from mild strains of descending like nausea and a little dizziness.

Second Layer: The Forest of Temptation 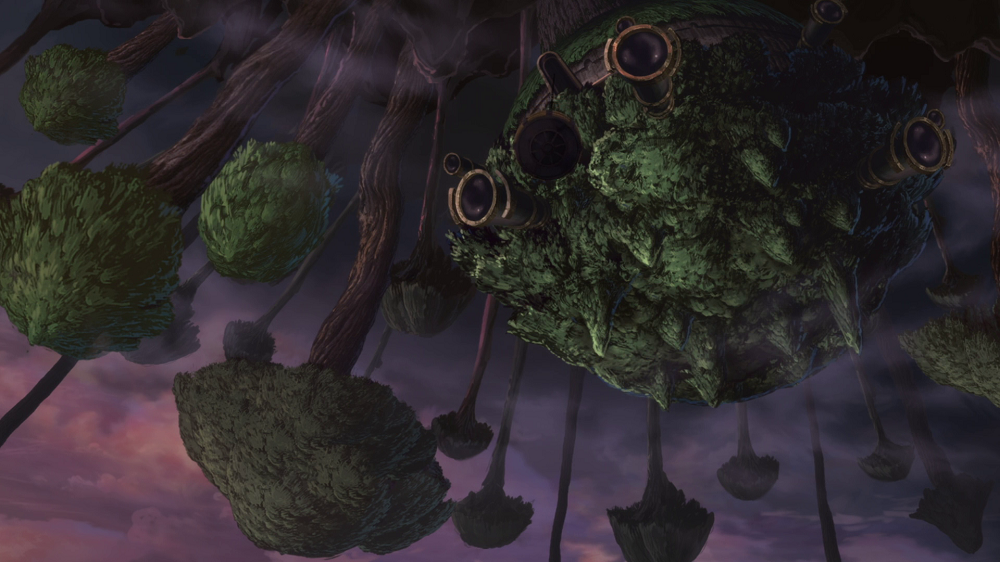 Beyond the depth of 1350 meters, the atmosphere of the Abyss abruptly changes. Marking the beginning of the second layer of the Abyss, this landmass of lush green forests is extremely diverse and accommodates some fairly dangerous alien species of animals such as Corpse-Weepers, Inbyos, and Amagiri.

According to the laws of the surface, no inexperienced Delver is allowed to go this deep and the Red Whistle Delvers who reach this point are considered to be dead as their chances of returning are very low. Since this area brims with tropical forests, it can often be easy for a Delver to get lost. However, its top half layer consists of a forest that has huge plants. The leaves of these plants point at the center of Abyss and this itself can be used as a cue by lost Delvers to find their way back to the pit.

The deeper part of the second layer is known as the Inverted Forests. As the name suggests, because of all the wind currents and updrafts that head from the bottom from the Abyss, the forest in this region is literally upside down. While the strain of ascension in most parts of the second layer is much higher than that of the first, the Inverted Forests experience relatively low Force Fields. Because of that, somewhere near the great tree of Porta, Delvers have created a resting point known as the Seekers Camp. Located exactly at a depth of 2450 meters, this camp allows Delvers to prepare for their voyages into the third layer. 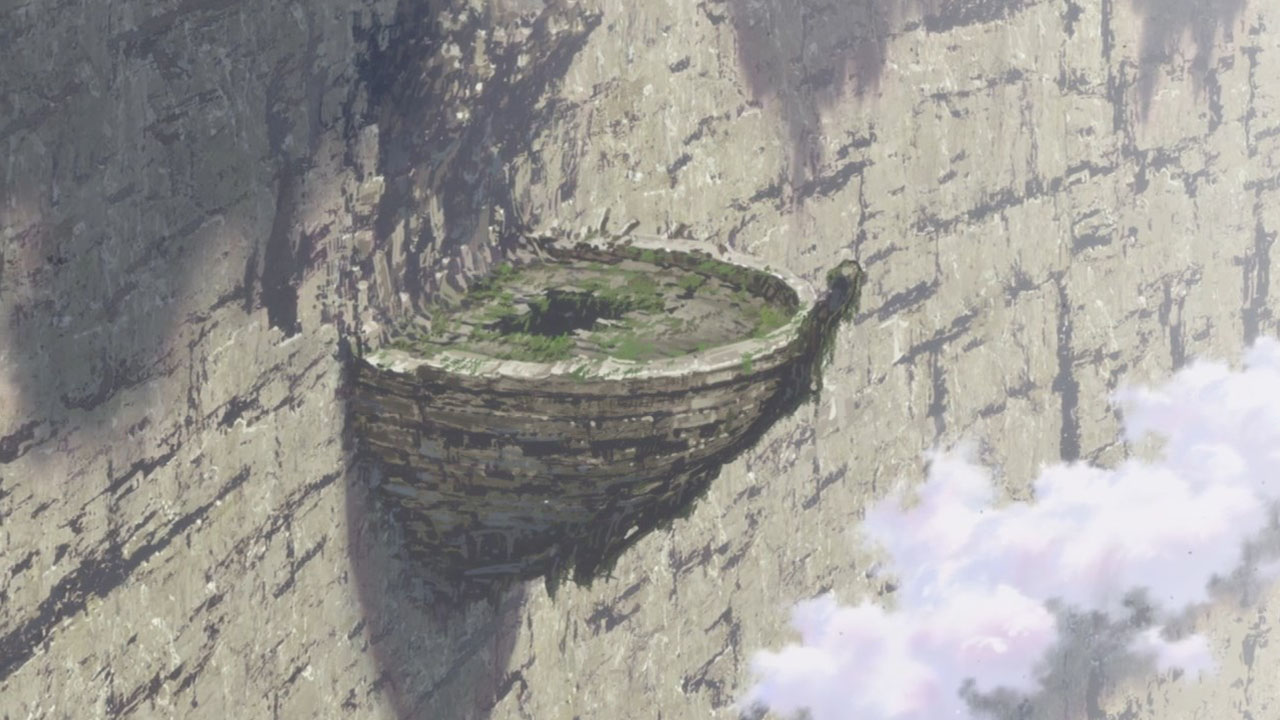 As the map suggests, compared to other regions of the Abyss, the third layer is fairly narrower and just gorges down like a circular shaft, with barely any vegetation in it. Most of the creatures in this region are aerial and can often be more dangerous than the ones in the second layer. The only way one can pass through this stretch of the Abyss is by using a network of caverns and holes which have been created by Delvers, ancient humans of the Abyss, tiny creatures known as Naritantans.

The third layer begins from a depth of 2601 meters and goes down to 7000 meters. Somewhere near is 6750-meter mark, the atmosphere of the Abyss begins to shift and slowly transitions to the next layer. Beyond this mark, the walls of the Abyss have Kazura squid eggs stuck to them which hatch and then flat in the Goblet of the fourth layer. 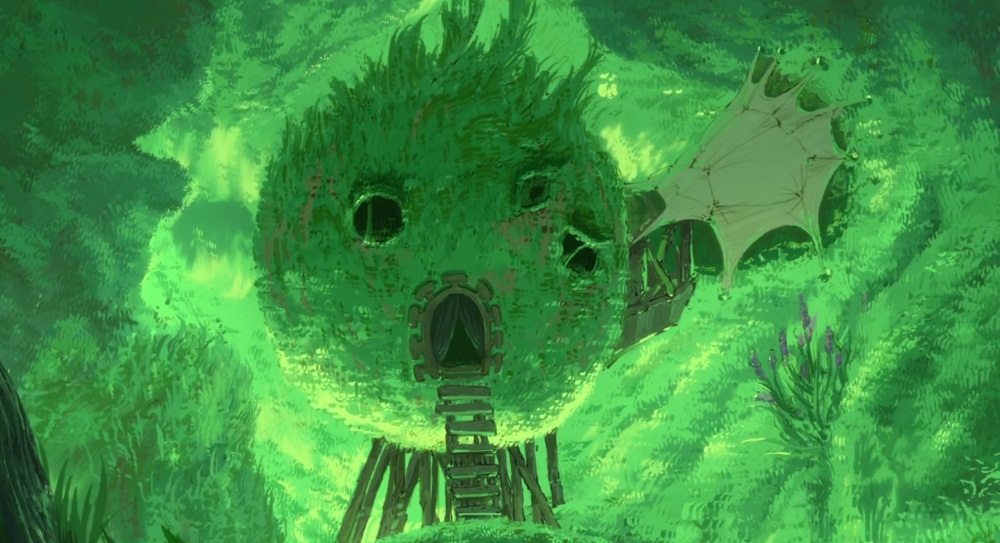 Starting at a depth of 7001 meters and going all the way down to 12,000 meters, any normal human who makes it this far experiences some serious strains of ascension which, if ignored, can later cause bleeding from every orifice. This region again has sprawling thick forests that are straight out of one’s nightmare.

Despite its vivid beauty, it is the home for some of the most deadly creatures and also has a series of platforms that are filled with hot water. This is the layer where Ozen claims that he found Lyza’s whistle and nothing beyond this is explored in the first season of the anime.

Somewhere in the upper layers of the fourth layer, Nanachi’s Hideout hut is located where Nanachi and Mitty live after escaping Bondrewed’s brutal experiments in the fifth layer. The force field in this region is extremely low and the curse of the Abyss cannot be experienced in this area.

Fifth Layer: The Sea of Corpses

The fifth layer, which covers starts at 12001 meters and reaches 13,000 meters into the Abyss, is a huge frozen wasteland that extends down to a massive water body. At this depth, most Delvers can experience extreme sensory deprivation, inducing self-harming behaviors in them. Only a few White Whistle and Black Whistle Delvers have lived long enough to tell the tales of this layer.

At its deepest point, right above the sea that rests at its surface, a Forward Operating Base known as the Ido Front has been established by a White Whislte named Bondrewd. Apart from being a research station, it also consists of a tower that has an elevator, which allows only White Whistles to pass the Seas of Corpses. As the map suggests, in diameter, this layer is by far the widest region of the entire Abyss and is close to ten times the diameter of the Orth.

A Whistle diver’s journey beyond the depth of 13,000 meters is known as “The Last Dive” as no Delver has returned from the Sixth Layer. As the folklore around it suggests, one loses his/her humanity beyond this point or simply dies. A sophisticated village known as Ilblu was formed in this layer and was entirely inhabited by Narehate. But since no Delver has ever been able to make it back to the top from here, no one really knows that the 6th layer accommodates the ruins of a lost ancient city.

Beyond 15,500 meters comes the seventh layer. The nature of its atmosphere remains to be a mystery and even its actual depth is unknown. According to the notes that Riko receives from Lyza, she had spotted Regus for the first time in the Seventh Layer. According to some White Whistlers, a ring can be seen heading down from this layer, which probably marks the beginning of the narrow channel that leads up to the end of the Abyss.

There are just theories surrounding the possibilities of what could lie beyond the seventh layer of the Abyss. One theory suggests that since the Abyss has striking similarities with Dante’s inferno, the last layer could be the ninth circle of hell. There are other theories, that claim that it could be a black hole, which explains the time dilations throughout its depth.