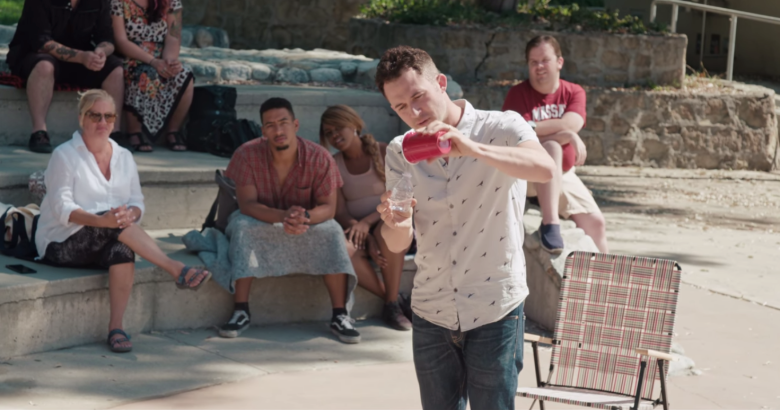 Magic can be fascinating and gleefully surprising. That is the reason magicians have been able to thrive as entertainers for years. The art form has also migrated to television with various magicians having shows of their own with similar themes. ‘Magic For Humans‘ is yet another magic show with a format that would be recognizable by several people.

The show stars the magician Justin Willman. Willman is not just a magician, but also a comedian and that adds to the show’s charm. In ‘Magic For Humans,’ Willman can be seen performing magic in public on the streets for common people. Hence, ‘Magic For Humans’ is a reality show. Nothing on the show is staged. Willman actually performs his illusions in front of the camera and complete strangers without having trained or been in prior contact with his audience at all.

In fact, he has repeatedly mentioned how his magic tricks are solely a product of his sleight-of-hand abilities. None of the magic seen on the show is a result of postproduction editing, camera tricks, or “fake reality.” By the latter, we mean that none of the people that Willman approaches have any form of prior rehearsal. They aren’t told to act amazed. It is people’s genuine reactions that are captured.  Have a look at him explaining that:

Where is Magic For Humans Filmed?

Moreover, California is also the hub of Hollywood. So, it makes sense for ‘Magic For Humans’ to be set and filmed in Los Angeles. Apart from just the regular street-fare, Willman also goes to some special locations for a few episodes. For instance, he goes to test his reflexes against the L.A. Chargers in the third episode of the second season. Have a look:

As you can see from the video, Willman goes to the Los Angeles Chargers Hoag Performance Center on 3333 Susan St in Costa Mesa, California. Apart from that, in the sixth episode of the second season, Willman goes to a Renaissance fair. Have a look: