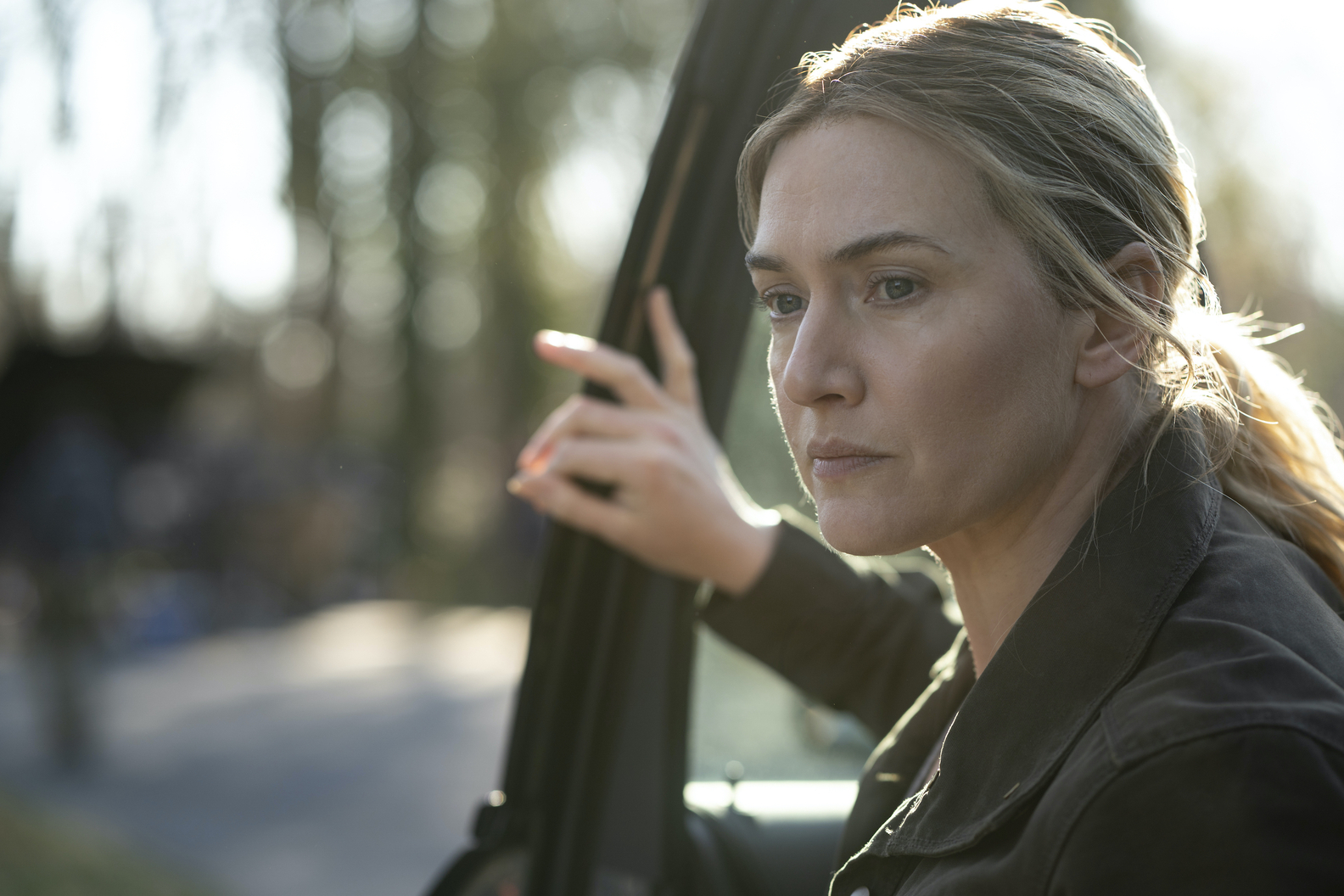 The moment we’ve all been waiting for is here – Erin’s killer has been declared. While the ‘Mare of Easttown’ finale has a plot twist most of us never saw coming, there is something to be said for how it deals with the emotional aftermath of the murder, especially since most similar shows would focus more on that big, grand reveal. Nonetheless, while it is exhilarating to finally have all the pieces of the puzzle in place, there are some notions that still merit a discussion. So, let’s get right into it, shall we? SPOILERS AHEAD.

The Chief tries to get in touch with Mare but to no avail. It turns out that John Ross is DJ’s real father, and he takes his brother “fishing” with the intention of shooting Billy. Mare comes upon this scene and intervenes, and John turns the gun on himself; Billy stops his brother from committing suicide. Mare then arrests John, who reveals that his affair with Erin started at the family reunion. When she became pregnant, he wanted her to get an abortion, but she chose to keep the child instead.

However, she did want John to pay for DJ’s ear surgery, and due to a combination of personal issues, she threatened suicide. He then divulges that he went to meet her at the park, and the gun went off accidentally. He panicked and covered up his tracks before returning to Frank’s engagement party. Mare also finds out that Lori knew about this but that her friend chose to lie to her. John then asks Lori to take DJ in and raise him.

Siobhan gets into Berkeley, and Mare encourages her to go. Carrie gives up custody of Drew since she is using drugs again. At lunch with Frank, Faye, Helen, and the kids, Mare sees Sandra, who later reveals that she did not restart her affair with John in recent times. After Frank and Faye’s wedding, Richard leaves town for work. Later, Mr. Carroll calls Mare, eventually informing her that his gun (a Colt detective special) went missing but was put back in place. This is when Mare realizes that John is not the real killer. The person who killed Erin is Ryan Ross, John’s son.

Mare of Easttown Ending: Why Does Ryan Ross Kill Erin?

At the police station, Ryan details that fateful night and the events that led to the murder. Lori knew that her son had killed Erin, but naturally, she chose to remain silent so as to protect her son. Ryan is sent to a juvenile detention facility, and Lori lashes out at Mare since she deems the cop responsible, in part, for breaking her family up. Mare talks about this in therapy too. As Siobhan leaves for college, Lori and her kids visit Ryan for his birthday, and Mare finally walks into the attic to confront her own grief after all this time.

Given that Ryan is barely a teenager, it makes for quite a shocking plot twist that I did not see coming, if I’m being completely honest. But what hits you even harder is Ryan’s motivation – he did it to protect his family the best way that he knew how. Now, this is not to say that Ryan felt like killing Erin was his only option; the gun going off really was an accident in his case. He simply wanted to scare Erin into staying away from John.

Now, while Ryan may not have comprehended the gravity of John’s incestuous and pedophilic actions, he does know one thing – his mother was incredibly upset the first time John had an affair (with Sandra). Back then, Lori and John separated for some time, and she did not want to get back with her husband either. However, she still gave him another chance. Ryan remembers how that time period affected all of them, but more importantly, he recalls how it affected his mother, whom he loves very much.

So, when he discovers that John is having affair with another woman – Erin – it transports him back in time to when his parents, who are arguably the biggest part of his world, split up briefly. Ryan senses that if John’s infidelity sees the light of day, then his parents, and by extension, his family, may not recover from it. Ryan is simply grasping at straws at this point, and he decides that he needs to get Erin to stay away from his father if the Rosses are to be together. Ryan is quite young and he is scared of what a future without his family would look like.

As a child who has a limited understanding of how things work, he decides that scaring Erin is the best route forward. Ryan already knew where Erin was due to the text on John’s phone, and so the teenager decides to approach Erin at the park. Ryan believes that by scaring Erin, all communication between her and John would cease, and this, in turn, will mean that Lori will not find out about the affair. But when Ryan actually comes face to face with Erin, she tries to grapple the gun away from him, only for it to end up as a fatal encounter.

After all, Ryan is merely a child and does not even understand how a gun functions. He simply knows that it is a weapon that he can use to his “advantage.” Ryan is not some sociopath or psychopath who has no regard for someone’s life. He never meant to kill Erin – this was made clear ample times during his interrogation.

Ryan even comes clean with the cops only to end this nightmare once and for all; he does have a conscience, and given that the adults in his life are fairly dysfunctional, it may not be fair to blame Ryan for the aftermath of his actions. All Ryan, driven by his emotions, wanted to do was protect his family from any discomfort a second time around. In essence, he was acting as the protective, elder kid who took charge when the adults in his life failed to do so.

How Does Mare Finally Come to Terms With the Loss of Her Son?

In the restaurant, there is a brief yet poignant scene where Helen confesses that while she was angry about Mare’s father killing himself and not being “the man she thought he was,” Helen has forgiven herself for the entire ordeal. She then asks her daughter to forgive herself for Kevin as well. Moreover, at numerous points in the finale, the motifs of grief, loss, loneliness, and guilt are discussed. Hence, it is quite natural to wonder if Mare has finally started confronting her own demons.

You see, throughout ‘Mare of Easttown,’ we see Mare as this stoic, rigid, and emotionally defensive/protective personality that uses her work as a source of distraction for her own pain – this is exactly what the therapist means when she says that Mare uses the grief of others to disassociate from her own emotions. By burying herself in work, Mare does not give herself the opportunity to catch a breath and process what she is feeling, mostly because that proves to be quite an uncomfortable task. So, she continues shoving it to the side; she will deal with her baggage another day.

But when Mare starts going to therapy, and when she meets other people like Richard and Colin who give her some perspective, she finally starts unboxing her own trauma and realizes that there is this ardent need to deal with her own emotions. Siobhan’s outburst probably only drives this point home further for the mother. Kevin is gone, and that is the unfortunate reality Mare needs to come to terms with. From what we can tell, she has lived in the same house for her whole adult life, and she hasn’t even gone in the attic after Kevin committed suicide, thereby alienating herself from reality as best as she can.

Not only does Mare lose her son, but she also feels some iota of guilt about not being able to save her own son from his drug-addled lifestyle. Given the violent flashbacks we have seen in previous episodes that detail what Kevin and Mare’s relationship was like towards the end, it is understandable that this dynamic with her son was taking a toll on her anyway. But by staying away from the attic, she is, in fact, staying away from a very important part of herself.

So when Mare finally steps into the attic, she takes the first step towards her own journey of healing, which by no means will be an easy one. But it is necessary. More importantly, this scene shows that Mare is finally ready to let herself feel more negative emotions like emptiness and sadness. She no longer needs to distract herself. Not only is this final shot allegorical in that it highlights the various stages of grief — denial, anger, bargaining, depression, and acceptance — but it also outlines that Mare is no longer restricted by her own emotional trauma. Once she confronts it and makes peace with it, she can move onto other, and maybe better, things.

Do Lori and Mare Make Up?

Yes, Lori and Mare share a rather touching moment at the end, where the two friends just hug each other while Lori breaks down. Lori has had quite an emotional ride – her husband and son are in jail, her best friend is the one responsible for putting them there, and she now has to raise a child who is the product of her husband’s incest and pedophilia. So naturally, Lori feels an insane amount of anger about the predicament she is in. Right after the arrests, when Mare tries to talk to her, Lori lashes out since it is misplaced anger.

In her heart, Lori knows that Mare did the right thing. But as a mother, Lori also wants what is best for her own son. That’s the funny thing about time – it heals all wounds. As Lori gets acclimatized to her new situation, she is able to channelize her feelings more appropriately, for the lack of a better word. Consequently, Lori knows that Mare is not at fault – she was just doing her job. In the end, Lori has to make peace with the fact that the man she married has made very questionable decisions that have led to the unraveling of the whole family, and it seems that by sharing her grief with Mare, Lori has started to accept her own reality and, like Mare, is slowly but surely on the right path to recovering emotionally.

Read More: Where Was Mare of Easttown Filmed?