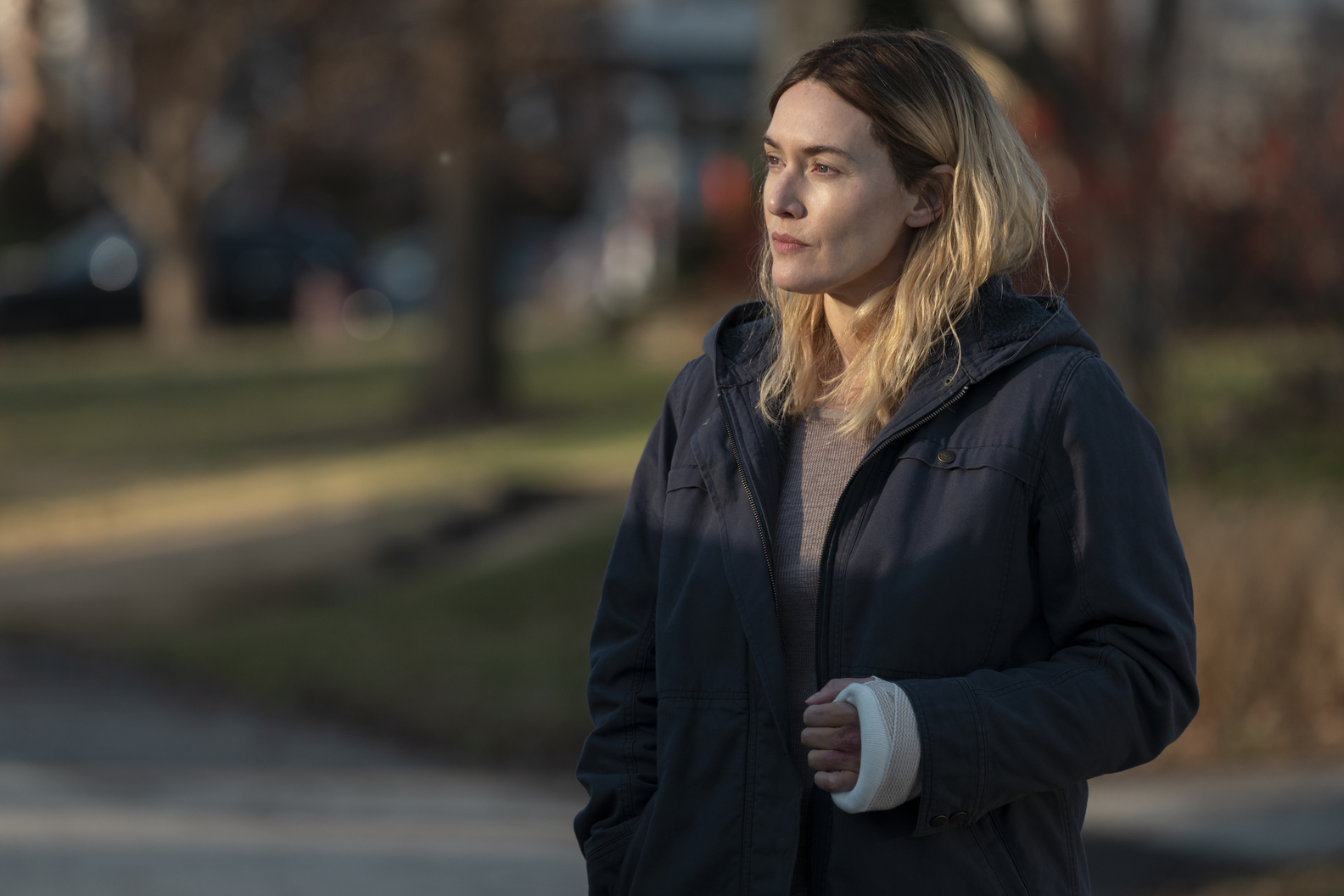 Episode 6 of ‘Mare of Easttown’ is fairly explosive with the revelations, but at this point, we had been expecting quite a few of these “breakthroughs.” In saying that, there are still many questions in the minds of the viewers. Did Billy actually kill Erin? How is Dylan connected to the whole ordeal, and why does he hunt down Jess, well, like an animal? Is John as innocent as the episode claims? Well, if you’re wondering the same, then we are here to alleviate your doubts. SPOILERS AHEAD.

As Mare recovers in the hospital, Katie is rescued and reunited with her family. Colin is dead – yes, I’m still not over it — and the Chief welcomes the help of the FBI. Erin’s bike is also discovered. Dan tells the cop about his conversation with Mark, who then clarifies that while he did get rid of her bike, he did not kill her. Nonetheless, he is arrested for tampering with evidence. Back home, Lori tells Mare that John is cheating on her again with Sandra and that despite all this, she loves the father of her children.

John, who is now living with his father, accepts that he had an affair. Billy also screams at John for the same (could this be displaced anger?) The Chief brings Mare back on the force and tells her that Potts had an alibi for Erin’s murder. Also, Richard and Mare effectively break up. It turns out that the gun used to kill Erin was an old one that was issued to the cops back in the 80s. Brianna reaches out to Mare and tells her that Dylan was not with her the whole night when Erin was murdered.

The Chief and Mare interrogate Dylan about the journals, but he simply lawyers up. Mare goes to therapy and reveals that Kevin hung himself in their attic; Siobhan was the one who discovered him, lifeless. The therapist feels as though Mare has always hidden behind the grief of others and not tackled her own issues. Beth calls Mare about Freddie, who turns out to be dead. However, Mare finds Erin’s clothes in Freddie’s belongings.

Siobhan takes an edible and incessantly calls Anne. In the meantime, we find out that the Ross family reunion was planned by John and that Lori, her husband, their kids, Billy, John’s father, Kenny, and Erin were there. Later, Dawn thanks Mare for Katie’s safe return. Siobhan, in an intoxicated state, lashes out at Mare about Kevin’s death. John’s father tells John that on the night of Erin’s murder, Billy came home later and went to the laundry; there was blood everywhere. Meanwhile, Kenny tells the cops that he had let Freddie take Erin’s belongings after her death.

Dylan confronts Jess about the journals and eventually finds her and threatens her at gunpoint about keeping her mouth shut. Carrie, who has Drew for the night, falls asleep while bathing him, but fortunately, Drew is just holding his breath and is not dead. Eventually, we learn that Erin was staying in Bill’s cabin during the reunion. John gets Billy to say, “I killed her.” Billy says he is ready to confess, and John offers to take him fishing “one last time.” At the jewelry store, Mare finds out that a Ross family member bought the locket.

Mare of Easttown Episode 6 Ending: Did Billy Kill Erin or Was it John?

Mare then goes to Lori, who reveals to her that John told her Billy shot Erin and is DJ’s father. Apparently, Erin threatened Billy with this secret, and he freaked out. Mare calls the Chief and tells him about this. Jess goes to the cops with information and hands over a photo to the Chief, who then tries to get in touch with Mare since she is in danger. As Lady Hawk goes to confront the Ross brothers, the credits start rolling.

With this, one is left to wonder – is Billy the real killer? Or is there more to the story? Well, episode 6 completely puts the blame on Billy, but to be honest, it is not really that convincing, especially when you consider that it works equally hard to laud John as a rather manipulative figure. This first comes to light when Lori and Mare talk about his affair. The cop tells her friend that John will try to woo her again with what clearly appear to be false promises – this is not the first time John has cheated on Lori. Mare tells Lori he will try to come back into her life, and Lori really doesn’t want to talk about these happenings just yet.

This interaction makes clear just how manipulative John is. Not only does he cheat on his wife repeatedly, but Lori still believes that her relationship is important to save, mostly because of the kids. Due to this, he gets away with doing what he wants and still coming home to his family. He knows how to procure the best of both worlds. Also, what if he is doing something similar with Billy?

Multiple times in the episode, it has been reiterated that the Ross family reunion contained a plethora of alcohol and that Billy and his family were drinking a fair amount. It could just be possible that Billy was so drunk that whole trip that he may not even remember much from that time. John even alludes to Billy’s drinking habits in episode 6, when the latter accosts the former. It is quite likely that John has convinced Billy that he is the killer.

But what if John is the one who actually killed Erin? We know that someone from the Ross family bought the locket, and what disqualifies John from the list of suspects? Maybe John was the one actually sleeping with Erin and not Billy, as the former believes. Plus, John knows that Lori basically keeps no secrets from Mare, and so he knows that this theory (if we may call it that) will eventually reach the detective. So not only is John playing his own brother but even his wife is not spared from his games. (Or, maybe both brothers are equally culpable?)

From what we can gather, John is the more likely suspect and not Billy. It is very likely that John is DJ’s father, and he is the one who gifted Erin the locket (remember the receipt only has “Ross” written on it). Also, it seems like John’s plan is to take Billy on a fishing trip, leave a pistol in the gearbox so that somehow Billy can kill himself – it would solve all of John’s problems. Everyone will think that Billy fathered DJ and took Erin’s life, and the guilt was too much for Billy to bear. So, he chose to shoot himself as well. John’s potential involvement then gets neatly tied up in a bow and is not tugged at again, because as of now, it seems like Billy is the only one who holds the power to implicate John (maybe by remembering some crucial piece of evidence in the next episode).

Why Does Dylan Attack Jess?

In episode 5, Dylan and Jess burn all of Erin’s journals, but the latter saves a photo from it, unbeknownst to Dylan. Then, in episode 6, she lets the cops know about the diaries, and when Dylan is interrogated, he lawyers up. So, when he sees her, he hunts her down and threatens to kill her, even going as far as to brandish a gun. But why would Dylan do this, especially if he is not guilty? Well, it is quite obvious that there was something in those diaries that implicates him or someone he loves. Either way, Dylan is not as innocent as we first believed.

‘Mare of Easttown’ really had us going by showing us Dylan’s sensitive side some moments, especially when he accepts DJ despite learning the truth about his paternity. However, when you really think about it, Dylan has more bad moments than good. Plus, his “solid” alibi has just fallen apart. So, where was he that night, and is he somehow involved in the murder plot? While there’s no concrete proof of his involvement – it’s all quite circumstantial – there are major red flags.

Hence, it seems like Dylan could have partaken in the murder. Maybe, for reasons yet unknown, he and John worked together to get rid of Erin. It could be that she had already divulged DJ’s reality to Dylan, who did not take it well. He could have approached John about it, and the two could have decided to do something about it. This is mere speculation, but there’s something to be said for the fact that Erin was killed by either a romantic partner or a family member (or both), and Dylan and John do seem to meet the criteria.

What is in the Photo?

Well, the photo that Jess gives the Chief in the climax plays quite a crucial role. Upon seeing it, he immediately tries to get in touch with Mare. Instinctively, there is this sense that Mare may not know what she is walking into. She believes Billy is the perpetrator, but maybe the photo contains more information that shows us that not only is John the real killer but that Mare is also in definitive danger.

On the other hand, the photo could be the definitive link between Dylan and the killer and could finally explain why Dylan has been working so hard to cover up their tracks. The one thing that can be adjudged is that the photo contains a revelation like no other, and we will have to wait for the finale for more concrete answers.